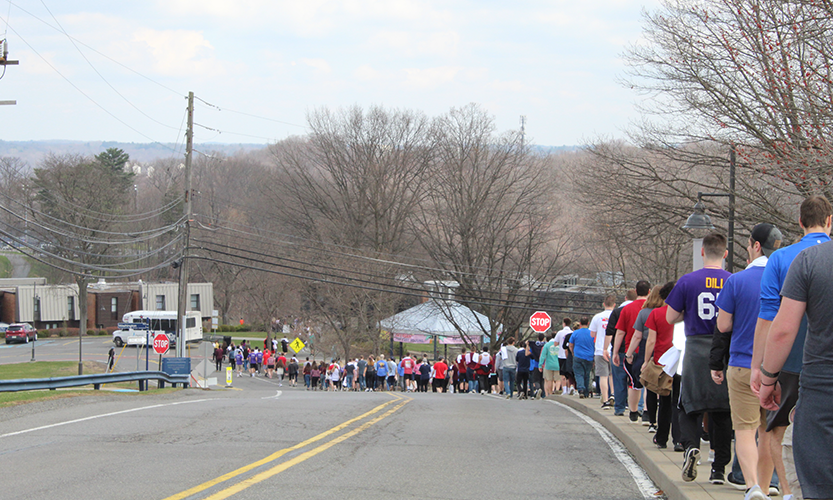 MOON TOWNSHIP — The third annual Out of the Darkness walk brought hundreds of people to the Robert Morris University Campus to fight against suicide.

On Saturday, people came together to participate in a walk around campus to show others that they are not alone.

THRIVE directors promoted and planned the event for the public. Co-Director Jessica Friss discusses the importance of putting an end to the stigma that comes with mental health issues.

“The de-stigmatization of mental illness is really important because a lot of people don’t reach out and ask for help because they are afraid of being made fun of or they are afraid no one is going to take them seriously,” said Friss.

The event featured several activities for students to participate in, including de-stress exercises such as painting, crafts, and raffles.

Various clubs and organizations came out to support the event, including The National Council of Negro Women, Active Minds and THRIVE Leaders. These organizations had tables set up to promote healthy mental health outlets.

Various performers sang and recited hopeful messages to the crowd. Among them was Sue Jamison, who recited the poem “I Bend.”

Jamison, a sociology professor at Robert Morris, is also passionate about mental health awareness. With a bachelor’s degree in social work, as well as work experience in victim services, she is familiar with the struggles of dealing with mental illnesses.

“I’ve had pretty severe depression and anxiety myself and I’ve been on medication and counseling on and off for about 30 years,” Jamison said. “I think we all have those times in our life where we are overwhelmed.”

Jamison hopes that through the event, getting help and support is more normalized, especially with young men.

“I think (there’s a stigma), especially with young men, who think it’s weak to show emotion, and we just have to normalize it,” said Jamison.

After performances and speeches, Delta Zeta, the top team fundraiser for the event, led the walk around noon. Students, faculty and family members all walked throughout campus for suicide prevention and awareness, starting from the Nicholson Center patio.

As people made their way through campus, they were met with encouraging signs as well as facts about mental illnesses. One sign stated that suicide is the second leading cause of death for ages 15-34 in Pennsylvania.

Proceeds from the event go towards the American Foundation of Suicide Prevention (AFSP) as well as mental health awareness programs hosted on campus.

For THRIVE Co-Director Alex Temple, this walk holds a lot of significance on a personal level.

“This walk is important to me because I struggled with suicidal ideations, and just to see all these people come together and support means a lot to me,” said Temple. “There are some people that have lost their lives to this, unfortunately – I think it’s important to recognize them as well as provide hope for those that are struggling.”

The AFSP table provided necklaces representing the different struggles individuals face with suicide. A white necklace represents the loss of a child, while green is a personal struggle or attempt. They offered nine different colors for people to remember and honor their experiences.

“When people show up, it allows us to have that conversation,” said Alex Temple.

After the walk, people got a chance to relax with pizza while raffle winners were announced. The anticipated grand prize was a signed Phil Kessel jersey.

Sue Jamison encourages students to use resources available on campus, such as mental health awareness events and the counseling center.

“If you are concerned about someone, tell somebody in the counseling center, because we can file something called a care report,” said Jamison. “It’s about feeling more connected and not feeling uncomfortable asking someone if they are okay.”

A committee on campus with faculty members are present to handle care reports. THRIVE leaders also work on hosting outreach events for the campus. According to the AFSP website, the Out of the Darkness Walk has raised $9,150 towards suicide prevention.