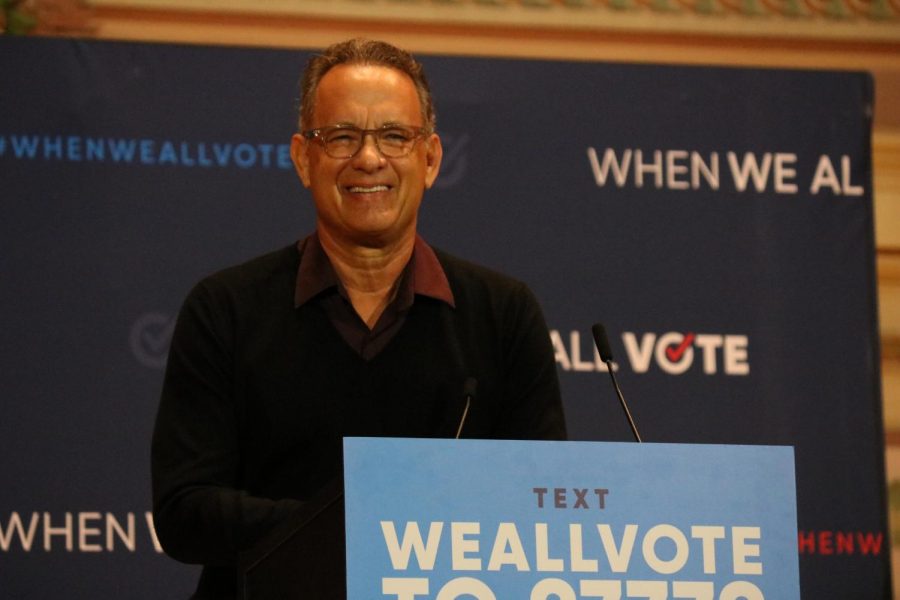 Tom Hanks speaks at When We All Vote rally.

Tom Hanks spoke to hundreds at Soldiers and Sailors Hall in Oakland to express the importance of voting, not just in the presidential election, but every election.

Hanks opened his speech with the question of the importance of elections in the U.S.

“What is the most important election in the history of our country?” Hanks asked the audience on Tuesday night.

“All of them,” answer Hanks. “Every single one of the elections in our country’s history are the most important elections of our time.”

When We All Vote, a nationwide campaign with its eyes set on the goal of encouraging people across the country to come out and vote, held a rally on the campus of the University of Pittsburgh. Speaking at the event in addition to Hanks was Pittsburgh Steelers running back James Conner, second-string quarterback Josh Dobbs, wife of head coach Mike Tomlin, Kiya Tomlin and Steelers executive Jim Rooney.

Hundreds of students, Pitt staff members and members of the community flocked to Soldiers and Sailors Hall to see the Hollywood actor as well as register to vote at the event.

“It’s very possible to assume, some decision will be made, I don’t need to take part in it,” said Hanks. “Well, I say if you don’t take part in what the decision is being made, you don’t get to complain.”

Hanks stressed the importance of voting in every election, especially the election in November.

Kiya Tomlin spoke about letting your voice be heard in Washington.

“We can’t allow ourselves become content to merely watch or even tune out the daily reality show of keeping up with Washington while we let old, rich white men make the decisions for us,” said Tomlin.

Steelers backup quarterback Josh Dobbs is using his position as a professional athlete to help persuade people to vote.

Former First Lady Michelle Obama was not able to attend the event, so she sent a video for those at the event to watch, asking viewers to go out and vote but also encourage others to join.

“Well it’s important because public policy is determined by the people of the United States of America,” said Rooney.

The headliner of the rally, Tom Hanks, is in Pittsburgh filming a new movie featuring the life of Fred Rogers, who grew up in the area. Hanks is scheduled to remain in the area over the next several months.