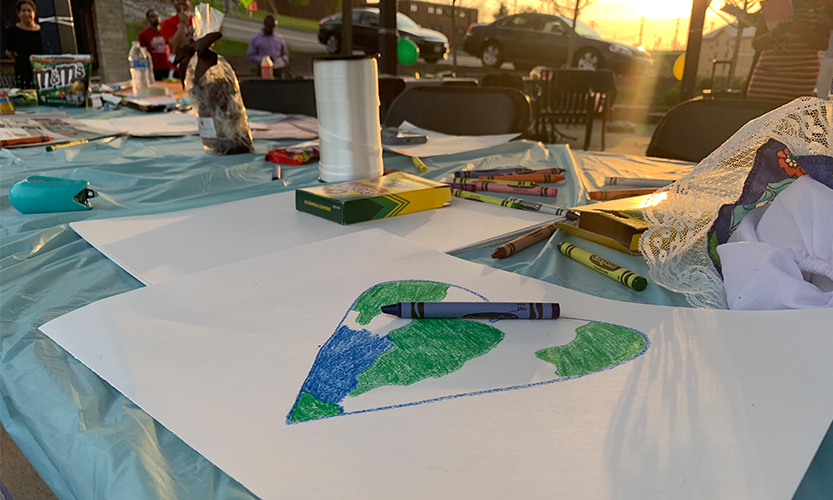 Another table was the Immigration and Customs Enforcement (ICE) information table, explaining the rights that people have under ICE, which enforces border control and immigration laws.

Vice president of the Organization of Latin American Students, Guillermo S. Rodriguez, describes why he thinks the rally is important for students.

“The event is to promote and help people realize the effects that are caused by ICE and administration, and forced deportation laws, especially on people that are undeserving,” Rodriguez explains.

To portray the difficulties that undocumented immigrants face, the rally had engaging activities. Students were given programs with different colored stickers representing an immigration status.

Citizens, non-citizens and undocumented immigrants were put in a straight line and told to move forward or backwards, depending on various rights and situations. The activity ended with the undocumented in the very back.

“Undocumented immigrants face a lot of trials and tribulations,” said Rodriguez. “Many of them include not being able to get medicare, and they get very low paying jobs under the table. They face a lot of discrimination in the sense that a lot of police and authorities will target them so it’s very tough being an immigrant in the United States.”

The rally also included performances and speakers. Collegiate Coordinator for the Center for Student Success, Micah Thompson, recited a poem, while the SGA representative for OLAS had a musical performance for the crowd.

As an aspiring law enforcement officer, Rodriguez hopes to influence people and make change in the community.

“My main goal is to make sure that people are being treated like people,”said Rodriguez. “Whether the laws and the policies reflect that is something that is going to have to be decided and changed.”

United we Dream is located in 26 states across America, providing resources for undocumented immigrants. This includes the ability to create a sanctuary campus, and mental health resources, especially for the LGBTQ immigrant population.

OLAS has donated over $180 for the organization. Savannah Francois’ personal life reflects her passion for immigration issues.

The Declaration of Unity was read out towards the end of the event to support all minority groups. Francois hopes that the rally brings people together and gets rid of stereotypes.

“The most common stereotype is a lot of people think that they steal jobs from Americans … I think people think that because they take the jobs that nobody wants,” Francois explains. “They are farm workers, they are maids, they’re waitresses, they are all these things that people don’t see as ‘this is my dream job.’”