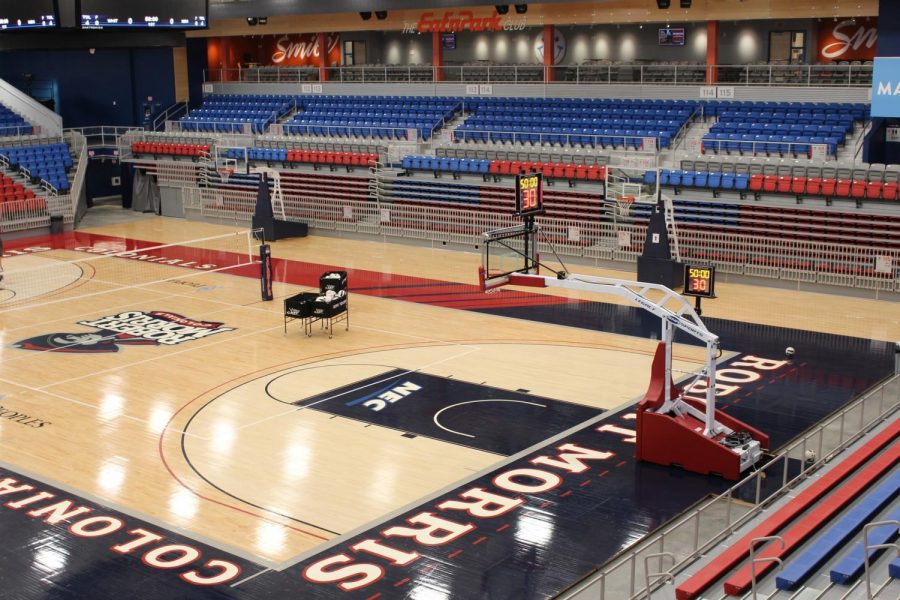 UPDATE: The original version of this article reported that the capacity for the UPMC Events Center would be 400 people. The actual calculation, according to the new state guidelines, would be 200 people for the maximum capacity. After fact checking this with the university, the article has been updated for accuracy.

MOON TOWNSHIP — Robert Morris University announced earlier this month that they would be reopening the UPMC Events Center with a limited capacity for basketball games.

Offering fans an opportunity to see games live for the first time since the shutdown of campus earlier this year, the plans to open this month were delayed by recent positive tests among the men’s basketball team’s personnel. Despite the setback, as well as the updated state recommendations for gathering sizes, the university is hoping to see the return of fans soon.

“With the new guidelines in place statewide, we are going to evaluate next week how we want to move forward,” said Jonathan Potts, Vice President of Public Relations and Marketing at RMU. “During the month of December, no Horizon League games can have spectators. That is a Horizon League rule.”

The recommendations for venues come from the state after an all time high for cases across Pennsylvania, with Allegheny County recording over 1,600 cases on Thursday and Friday of this week. The surge in cases has also affected the community on RMU’s campus, with 160 students in isolation or quarantine.

With the increase in cases, the capacity at the UPMC Events Center has been modified to accommodate only 200 people. This number would include the 239 season ticket holders who purchased tickets to this year’s game, as well as those essential to the event.

“That 400 would include everybody participating in the event, including the student athletes and coaches,” said Potts. “It would likely be a game by game decision depending on what restrictions are in place at the time.”

Despite the limited space at each game, the university wants to ensure a space is always dedicated to students. While previous models of seating allowed around 50 students at each game, this number will be dependent on each game and what recommendations are in place for gatherings at the time of the games.

“The bottom line is that we always want to make sure that we afford an opportunity for students,” said Potts. “It may be a very limited opportunity due to the restrictions in place, but we don’t want to allow a game to have spectators and not have students. That’s not something that we are going to do.”

Student athletes are also expected to cooperate with the various safety measures, which will include testing after travel and potentially quarantining during the semester if positive cases were to arise on the team.

“We would follow the state guidelines and requirements, which right now require a quarantine or a test to be conducted 72 hours prior to returning to campus,” said Potts. “We would follow that testing guideline. We are already testing athletes three times a week in (basketball), so we believe that fulfilling that testing requirement would ensure that we can monitor our athletes’ health and safety and prevent them, in the case of a positive case, from spreading it to campus.”

The university is planning to continue hosting classes at the UPMC Events Center, which allows for social distancing guidelines for in person classes on campus. The number of people in the center, including the classes, will need to remain under 400 at all times to meet the university guidelines, so potential conflicts between game times and classes will be addressed should they arise.

To ensure student safety, all visitors to campus will be required to follow the RMU Ready Plan that students followed in the Fall semester. This includes wearing masks in public spaces, remaining in social pod groups for seating and other precautions to prevent potential exposure and spread of COVID-19 when at the university.

“No one who comes to our campus will be exempt from the rules and guidelines that we have all had to follow,” said Potts.

While the university is hopeful to have the center open, they want to make sure that their standards for student safety are met and they are following the guidelines officials are asking of them.

“We are always going to, at minimum, follow state, local and national guidelines,” said Potts. “In some cases, we may choose to exceed them and ensure we don’t conflict with the health and safety of our own community or ability to hold classes in a socially distanced manner.”

As of now, there are currently no plans to host concerts at the UPMC Events Center in the near future. Follow RMU Sentry Media for updates as this story develops.