A day in the Life: RMU Live Sports 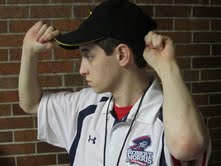 After working three games of hockey on March Friday 2nd 2012 for RMU Live Sport Productions, I realized for the first time, university history would be made.

Waking up around noon on Saturday, I knew I had another busy day ahead of me. After arising from my bed, I turned on my computer and went to put in my contacts and brush my teeth.

Before leaving for Neville Island, I listened to a few classic rock songs for motivation. Since crew call for setup was at 12:30, I knew I could not eat breakfast.

After arriving at the Island Sport Center, everyone was excited to see the women’s hockey team hit the ice. For most of the hockey games covered by RMU Live Sport Productions, I had the opportunity to be on ice level operating a camera.

After arriving at Neville Island, it did not really hit me that I would be witnessing university history on the same level as the players.

Excitement was rising because the start of the game was reaching. Soon after the puck dropped at a little after 3 p.m., Katelyn Scott scored her first goal of the year to give RMU the lead.

When I saw this happen, I was taken back to the day I won my first wrestling match as a starter in junior high. My team at the time came congratulating me with almost the same excitement Scott did when she scored.

The advantage of working the shoulder camera on ice level behind the boards and glass enabled me to see how great a game the defense and goaltender Kristen DiCiocco played.

The defense was unstoppable and played what I thought, their best game of the season. Between periods, I would film the players leaving and returning to the ice. At that time, I witnessed the excitement and drive each player had. It made me miss the adrenalin I used to feel during a wrestling match.

Throughout the entire game, the team proved they would never give up. For the first time in university and CHA championship history, Mercyhurst would not be announced champions. I am proud to say, I witnessed university history occur.

As the players celebrated the victory on the ice, I was able to go out onto the surface and film the players.

Not only did I see the proud faces but a face that said, we are the number one team. Such an achievement can only be accomplished with dedication.

Later that same day, we covered the men’s playoff game. After a tough loss, I realized I would spend much of Sunday sleeping after a busy and exciting Saturday.