David defeated Goliath through my iPhone 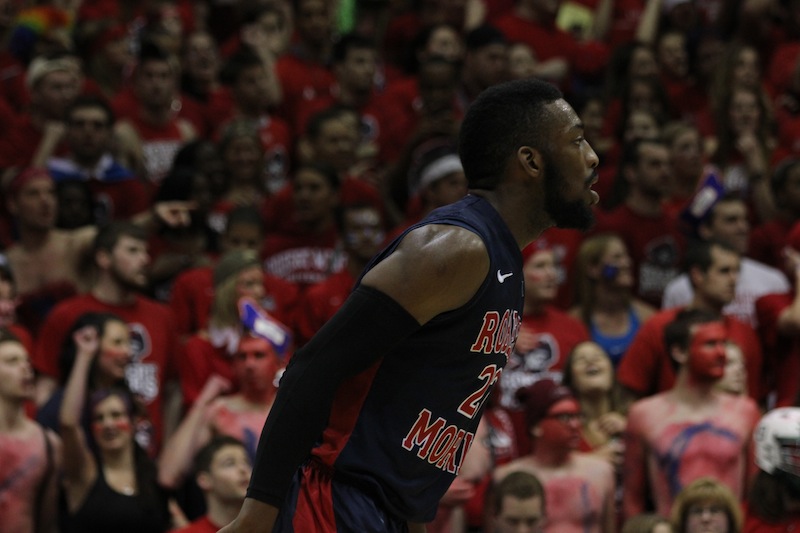 It has been over 200 years since the last upset to be recorded in the history books for the Colonials. In 1776, the Colonial Army took down the almighty British to take control of America, which has led us to where we are now. What is now?

Me? I was at the Consol Energy Center spectating the Pittsburgh Penguins defeat the Washington Capitals and claim their 10th win in a row for the third consecutive season.

Puck drop was at 7:37 and the tip-off was at 7:32. If only time travel was possible. My body would have been in two places at once. Apparently, Einstein did not get the memo that RMU would be playing Kentucky, as the Pens would play host to the Capitals.

The game begins at both venues and my mind is split. I was not at the Sewall Center to take in the vast sea of red shirts. There was no smell of the Chuck or the aroma of body paint.

My avenue of retreat was in my pocket, vibrating with each update from my mother about the RMU game. For the next two hours, my ear would take the worst beating of a lifetime. On full blast, I listened to the RMU game through a stream on ESPN’s “WatchESPN” app.

If something great happened, the voices of Bob Wischusen and Jimmy Dykes were drowned out by the screams of deafening Colonial Crazies. The louder it got, the more my ear rang. As the game progressed, it just became louder and the elation from the fans became easier to visualize.

The funny thing about listening to games is the mental picture you create. It all depends on the mental breakdown of a person’s brain.

“As Velton Jones dribbles across half court, he fakes the shot. The pass is caught by Coron Williams for three,” followed by white noise throughout the speaker.

You could tell Williams made the shot. Something provided me with a premonition of, “We are going to win this.”

Halftime gave my ear a rest, while the Colonials held a 28 to 27 lead. Optimism still crept in the back of my mind. After two days of pessimistic attitudes and 30-point blowout predictions, maybe something was special about this RMU squad Andy Toole assembled.

Velton Jones was a senior. Russell Johnson was a senior, as well as Treadwell Lewis and Shane Sweigart. The last year for this class to make a mark and the next 20 minutes of my life will never be the same.

Minute by minute my heart began to race as RMU went up six, but Kentucky would score a three-point basket and cut the lead in half.

A pattern seemed to develop in the game for sports fan to have heart attacks. Sometimes, I believe sports are fixed to provide the most stressful situations in life to the diehard fans.

Interestingly enough, the brain remembers and retains the most information and vivid mental pictures when you are stressed or excited. Both provide the adrenaline needed to explain shot by shot what occurred that night.

At the hockey game, my girlfriend sitting next to me had the score updated much quicker than the simple stream I was using to listen to the game. What the score of the Penguins game you ask? I had no idea from 7:32 to 9:31, and I didn’t care.

As Wischusen spoke for the final eight seconds of the game; time slowed down.

That moment when the world seems it isn’t spinning anymore. For people, it could be that one moment where death is near. The birth of a child or a wedding seems to have time halted for a brief moment just to visualize and memorize.

Center, Mike McFadden, hit two free throws with eight seconds left and John Calipari, head coach of Kentucky, elected not to take a timeout. His point guard rushed to the floor and passed it to an open Kyle Wiltjer and the crowd watched in awe as the rim made a, “doink” sound. At that moment, “doink,” became the most popular sound in Moon Township.

Over 3,000 people watched as history was made. RMU won their first ever NIT game and the biggest game in their history. From my vantage point at the Consol Energy Center in downtown Pittsburgh; the only sound I heard was that white noise again.

It was over 3,000 people screaming their heads off and storming the court. I didn’t need a TV to experience this. I am a Colonial and spiritually, my mind was storming that hardwood floor as well.

From that moment on, my ear was ringing just like a heavy rock concert. At the end of the day, it was well worth it, as one of my favorite athletic squads of all-time pulled off the impossible.

In 2010, RMU traveled to Providence and took on the second-ranked Villanova Wildcats in the NCAA Tournament in the first round. It took overtime for the Wildcats to defeat the Colonials, but a standing ovation was due from the crowd for Mike Rice’s squad. Three years ago, those Wildcats prevailed as the opposite occurred.

Andy Toole conquered this set of Wildcats and everyone has their own story. Most watched it on TV, while the lucky ones packed the Chuck as if the national championship played.

On Tuesday, March 19, Goliath was taken down by the small but mighty David. For this Colonial Crazy, it was through an iPhone.