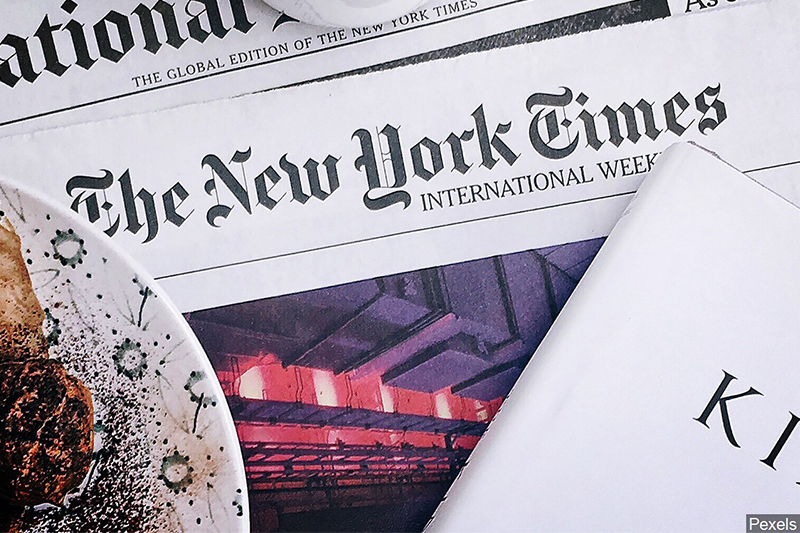 MOON TOWNSHIP – As an editorial contributor, I take great interest in reading editorials published by different news outlets. I would not be able to do this, however, if freedom of speech was not considered an American right. In fact, one of the greatest aspects of the American press is its freedom to publish relevant information, as well as to have people reflect on that information. It is a privilege given to Americans by the First Amendment to the United States Constitution and is often a privilege that is taken for granted. So, when President Trump attacked an anonymous opinion piece published by the New York Times, I was appalled. Before I get ahead of myself, I think it would be appropriate to give a brief summary of the editorial. Originally published by the New York Times, the piece was written by an unnamed member of President Trump’s staff.

Not only is this author a part of the president’s staff, they claim in the editorial that they belong to a group of White House staff committed to “thwarting Mr. Trump’s more misguided impulses until he is out of office.”

While not opposed to all of the president’s policies, the group is concerned of the possibly negative implications of President Trump’s unconventional governing practices. Citing lack of morality and lack of organization, the anonymous author warns readers that the president is not working in the best interest of America and its citizens. Now that the central cause of controversy has been examined, it is important to consider the president’s response to the article.

According to Time Magazine, President Trump tweeted, “Does the so-called ‘Senior Administration Official’ really exist, or is it just the Failing New York Times with another phony source? If the GUTLESS anonymous person does indeed exist, the Times must, for National Security purposes, turn him/her over to government at once!”

It is this response that originally incited my frustration. The reason for my irritation lies in the American ideals of freedom of the press and democracy. Starting with freedom of the press, as stated earlier, the right was established in the U.S. Constitution’s First Amendment. Not only this, but freedom of the press has been refined through court precedents. In fact, in the 1931 case Near vs. Minnesota, the Supreme Court put forth an important idea.

According to the Bill of Rights Institute, in this important case, “the Court struck down a state law allowing prior restraint (government censorship in advance) as unconstitutional.”

In other words, government officials cannot censor information shared through the news just because they do not like what is being said (excluding libel). In an era of editorials, this precedent remains relevant. In the case of the New York Times editorial, President Trump claimed that the editorial posed a threat to national security. Not only this, but the president demanded to have the name of the anonymous author revealed, against the author’s wishes.

Because the author chose anonymity to save their job, the New York Times turning over the name to an angry leader could result in termination of employment, a fate faced by a number of former White House employees. Essentially, because President Trump demanded something that could endanger the livelihood of a member of the press, purely because he was angered by that member’s editorial, President Trump showed disregard for not only the First Amendment, but the freedoms enforced by Near vs. Minnesota.

The second reason the president’s response angered me is that he espoused ideas contrary to democracy. His response aligned more with that of a autocratic ruler, rather than a democratic (not the political party) president. Let me clarify one thing: I am not saying that President Trump is an autocratic dictator. But the ideology expressed in his response is startlingly similar to that of more abusive leaders.

With that cleared up, let’s go back in history to the time of World War II. While the Nazi party was popular and atrocities against Jews and other groups were being committed, a small movement developed to stand up against the evil. This group, called the White Rose, was responsible for the covert distribution of anti-Nazi pamphlets.

According to the BBC, two of the movement’s leaders, after being discovered handing out pamphlets, were “executed by guillotine, along with their friend and collaborator Christoph Probst, on 22 February 1943.”

While the practices of the current American government are nowhere near the horrific caliber of the Nazi regime, President Trump’s distaste for opposing views is disconcertingly similar to that of the Nazi party.

In fact, in addition to the tweet already shared, Times Magazine reported that President Trump tweeted “TREASON?” to express his discontent with the New York Times article.

The fact that the president would call opposing views within his White House treason is alarming, because the Nazis during World War II viewed opposing views this way.

All in all, only time will tell the effectiveness of President Trump’s administration, as well as the resistance within it. It may not be my place to critique the policies put forward by President Trump since my views are quite obviously biased. However, as an American citizen, it is my duty to point out constitutional abuse put forward by America’s leaders. To remain silent would be a detestable, unpatriotic act. I owe too much to the men and women who fought for the freedoms enjoyed by America to sit back and let the president ignore these monumental gains.

While the country is almost two months removed from the publication of the editorial and the president’s response the lack of continued conversation is scary. By not continuing to respond, American citizens are demonstrating support for rhetoric that goes against every fiber in America’s collective being. Regardless of where people fall on the political spectrum, America must recognize that presidential rhetoric like this does not reflect what our country should strive to become: free.