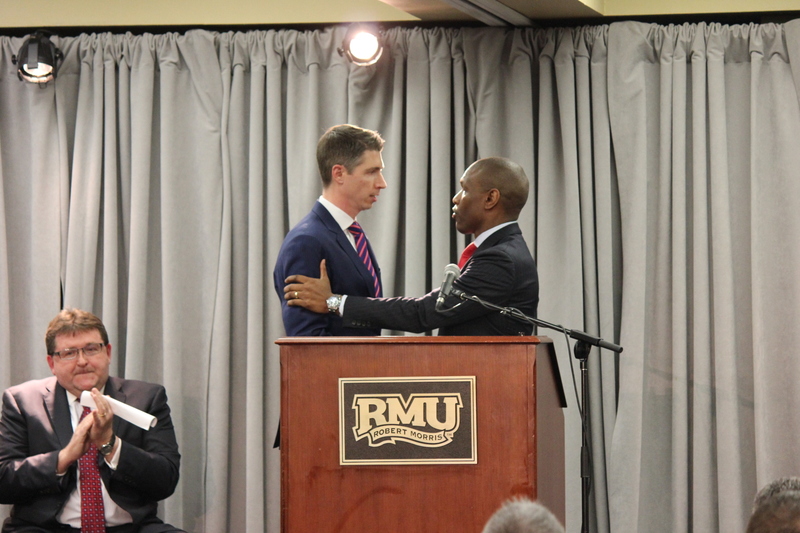 Robert Morris University, nearly a century old now, has come a long way since being founded as an accounting school in downtown Pittsburgh. Just fifteen years ago, the school made the move to add a graduate program and become an official university.

Though, RMU is continuing to find ways to grow in size and prestige. Part of the plan for future growth puts an emphasis on athletics, with good reason.

Dr. Christopher Howard, president of Robert Morris University, appears to have a simple thesis for its growth: successful athletic programs will help attract more students through national recognition and a more exciting on-campus atmosphere; the increase in enrollment will then create more academic competition, improving the university as a whole.

The evidence of this lies in what President Howard has done with RMU athletics over the last year.

On Sept. 1, 2016, Under Armour became the exclusive outfitter of Robert Morris Athletics. Being the 36th school to sign with Under Armour put the school under a more national spotlight.

More recently, RMU made its announcement of the UPMC Events Center, a multi-purpose arena that will house men’s and women’s basketball and volleyball. This is a $50 million project that will replace the current, much older building: Charles L. Sewall Center.

President Howard explained what this event center means for the university when he said, “With a new venue of this quality and size, RMU cements its status as a university on the rise.”

Both the UA deal and the UPMC Events Center open up the possibility of a change in conference in coming years. RMU basketball and volleyball reside in the Northeast Conference as of now, but a jump to the Horizon League or Atlantic 10 is foreseeable with these changes.

A move to a new, more prestigious conference would open up new recruiting channels, provide a larger audience, and likely be more lucrative.

While some students are frustrated with such a large emphasis placed on investing in athletics — as opposed to upgrades in dorms or classrooms — they should rest assured that almost all of the funding has come from outside donors. Given time, the return from successful athletics will be spent on improving other aspects of the school.

Strong athletic programs are key to the growth of Robert Morris because it is one of the best ways to gain national recognition. The recent investments in athletics are going to help improve all teams at RMU.

The new arena’s ability to help improve teams was explained by volleyball coach Dale Starr. “College athletics, and recruiting, in particular, depends heavily upon facilities and a sense that the athletic department cares for and rewards the athlete’s efforts with great facilities to support them on the field, court and in the classroom,” he said.

In terms of rise in student enrollment, there is evidence of a positive relationship between the two. Douglas Chung studied the link between athletic success and an increase in applications. His findings concluded that when athletic programs improve, there is a direct, positive correlation with the school.

This includes an increase in the quantity and quality of applications that would typically only result if tuition was decreased by 3.8 percent. When this happens at a university, Chung refers to it as the “Flutie Effect.”

How I first heard of Robert Morris University is a perfect example of the “Flutie Effect.” I am from Michigan, and the first time I heard of RMU was when the men’s basketball team upset Kentucky in the first round of the 2013 NIT. The win itself was not what convinced me to come here, but it was what originally piqued my interest in the school.

Another example of Robert Morris being in the national spotlight was when the women’s basketball team played against UConn in the first round of the NCAA tournament last year. While the Colonials did not win — and the announcers occasionally called them the ‘Colonels’ — they were able to compete in front of a large audience and promote the school in a positive way.

Moments like these are a great way to gain recognition from potential students. With the recent investments made, Robert Morris now waits for its own “Flutie Effect.”

While the need for strong academics remains, the future growth of RMU will be amplified with successful athletics on the national stage. Athletic success is not only important in appealing to a national audience, but also to the local area of Moon Township.

Attend a hockey or basketball game and you’ll see local kids cheering on Robert Morris. They get truly excited for the school because of the athletic programs. If RMU continues to create an exciting atmosphere, local support will increase too.

President Howard understands the importance of athletics as a platform to promote RMU, and his actions have reflected this by making investments in athletics a main priority.