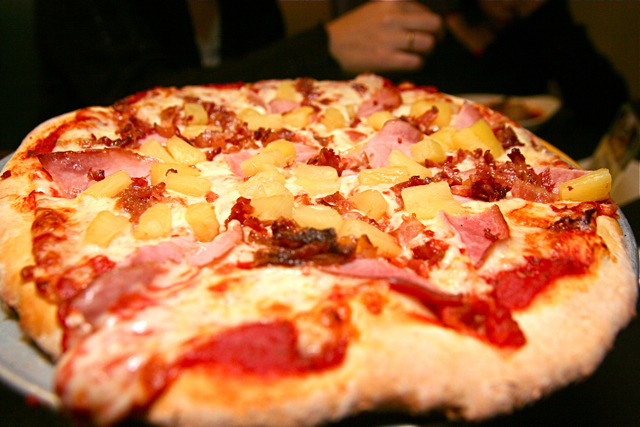 Pineapple on pizza: Is it an absolute heresy? Or are these slices of pie a divine miracle?

Before answering this important question, let’s take a look at the history of pineapples. Pineapples originated in South America, predominantly in Brazil and parts of Paraguay. They were discovered in 1493 on the island of Guadalupe by conquistadors, the first interaction Europeans had with the golden sweet treasure.

It was instantly planted on all colonial powers colonies across the world once it was discovered. Nowadays, you can find it growing in almost any part of the world, serving up a new taste to a people and their palettes being infused with new exotic aromas and flavors.

The tomato is another bountiful fruit found on God’s green earth, originally hailing from South America. The fruit has been widely eaten by the Aztecs since 700 AD and was discovered by the Europeans in the 16th century; a similar history of the pineapple.

A coincidence? I think not. After the tomato became a staple back in the old world, Italy became a proud partner of incorporating it into their cuisine. This articulated the first pizza after Europeans came in contact with the Americas.

If a word that could be used to describe pineapple making its way onto that savory, soft, and crunchy delicacy would be Kamikaze, a Japanese word for “divine wind.” Almost as if God was pushing this meeting of the two lovers who have been so far from each other for so long, finally an embrace. A warm kiss the two that fate finally bestowed to the star crossed lovers. It’s almost as if God wanted these two to find each other, think about it? Two fruits so close but yet so far and finally a dish so great that is universally recognized as delicious. Were they not meant to find each other?

Pizza is already so great, wouldn’t you want to make it better? The perfect concoction of sweet and savory all piled nicely on that finely risen hand-tossed dough. As God told Moses to etch his stencil into the rock, giving the world 10 glorious Commandments that fueled our societies and cultures for centuries, God commissioned an 11th unwritten Commandment when he sent those fruits to be discovered by those Iberian conquerors.

Now right now you are thinking that’s it, it’s been done, they can’t do anymore? Can they? Fast forwards 300 years to the groovy 60s, with civil rights, gay rights, and feminist movements. A controversial and social changing decade that bared the forefront for the modern world we see today. What else came out of that lively decade?

An ingenious Greek immigrant on the cold shores of Ontario, Canada, concocted what could only have resembled what Muhammad saw in his dreams. He created something so holy I would die for this gift to the world. Pizza that has ham and pineapple on it.

I know that Greco-Canadian fellow may not have been Hawaiian but the spirit from Lono flowed through him (Lono being the ancient Hawaiian deity of agriculture). Mainly associated with rainfall, fertility, music, and something that the world definitely could use a little more of. Peace.

The third and final conclusion to a trilogy of perfection. What does it represent? Peace. Sounds like Star Wars could take a few pointers from these holy entities (Looking at you, Rian Johnson).

Pineapple on pizza is directly associated with peace and therefore could be the very thing that could bring the world together. End all this turmoil and animosity we have towards each other. Christians, Jews, Muslims are all looking for the second coming of the messiah to come down and save us all. Well, what if he already did? it’s just a bit more subtle than everyone thinks. Not everyone turned righteous when Abraham, Jesus, and Muhammad tried to rid the world of evil to bring peace. Maybe God is trying a new approach one that’ll not only touch our hearts but our stomachs.

The Messiah was crafted by our father. Then the prophet Sam Panopoulos articulated God’s word into one, soft, tasty miracle.Some will not join the cause and think it is disgusting that this should never have happened. Do you know what I say to those who don’t believe in pineapple on Pizza? They don’t believe in god’s word.