Power rankings of the NEC Mascots 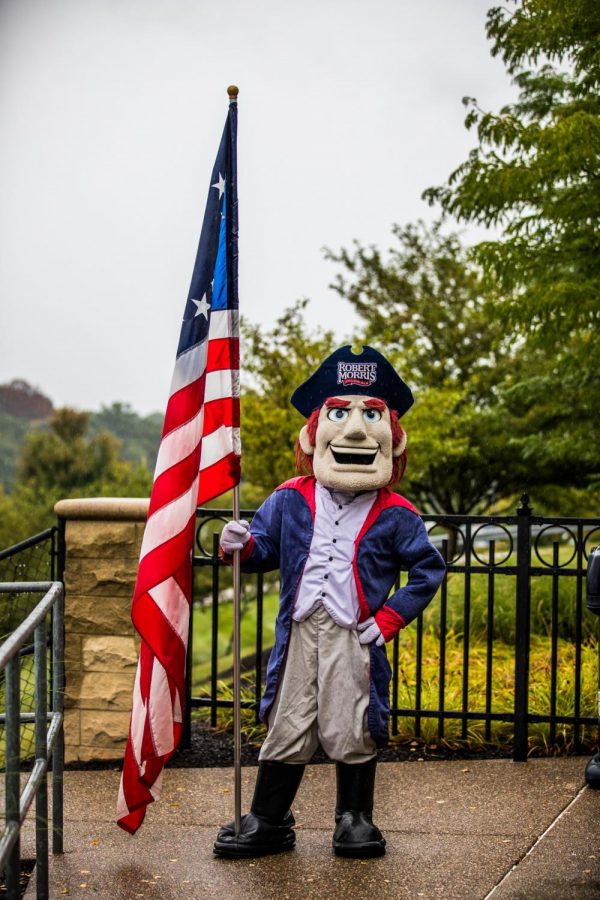 Mascots — they can be polarizing figures in the sports world. They can cause controversy, like the Cleveland Indians and Washington Redskins mascots. They can be the source of bliss and jubilation, like whenever NFL Mascots play 12-year-olds in football. (Not condoning grown men running over 12-year-olds, but it is hilarious when they wear animal costumes, at least.) They can also be downright weird, like the existence of the Philadelphia Phanatic, which looks like it was designed by a kindergartner with a horrible selection of crayons.

Ranking mascots is a tricky task. They are just like most things in the fact that beauty is in the eye of the beholder. Everybody has their own favorite and least favorite, some people may want to feel the gentle caress of a ginger mountain man wearing a flannel with the sleeves cut off, while others may want to fly away in the lean arms of a 6-foot Brooklyn Blackbird, whatever that is. But where exactly does RoMo stand in the grander scheme of things? Well I’m glad you asked, here are our power rankings of Mascots in the North East Conference:

I don’t know why the design team thought they could just stick a bird in a football jersey and call it a mascot, but it doesn’t work, and if that isn’t bad enough, I don’t even think he has a wacky name. All I could find is that his name is the Wagner Seahawk. Wagner Seahawk? Really? If Wagner athletics wants to step up their game, naming their mascot is a good first step.

#9
Mascot: Brooklyn Blackbird
School: Long Island University Brooklyn
The Brooklyn Blackbird is awful for the same reasons the Wagner Seahawk is awful. It’s not a fun or wacky design in any aspect, which mascots typically are supposed to be. And if that isn’t bad enough, Blackbirds don’t even live in Brooklyn, not even in New York State. Although the Common Starling is native to Brooklyn and is easily confused with the Blackbird, it’s not hard to pick up a bird encyclopedia and do research that took me 30 seconds. The starling is also one of the most invasive species on the planet, a flying conquistador if you will. Maybe if LIU ever attempts to rebrand, they should want to design a mascot that doesn’t look like it just narrowly escaped death from the avian flu.

#8
Mascot: RoMo
School: Robert Morris
Remember that episode of Spongebob where Spongebob gets “the suds?” That’s what RoMo reminds me of. He’s too plain of a mascot for him to be enjoyable. And his smile is too wide for someone who lost all his money in the war. Also, his deadbeat eyes look absolutely lifeless, yet intimidatingly menacing at the same time.

If RMU ever looks to switch it up in the mascot department, which I hope they do, I suggest Steve from Romo’s or even the campus’s favorite landscaper John Tucci. Even Romo’s, everyone’s favorite on-campus sandwich shop, might make a better mascot than this gray-skinned abomination.

#7
Mascot: Rocky the Terrier
School: Saint Francis Brooklyn
Rocky the Terrier has one thing going for him, and that’s his name. Rocky is a great name for a mascot, just not a mascot that is a dog, only a mascot that is somehow related to rocks or possibly boulders. This mascot is somehow both too cute to be intimidating and is too intimidating to be cute. Mascots should be one or the other.

#6
Mascot: Big Red the Pioneer
School: Sacred Heart University
Big Red the Pioneer has too big of a smile for someone who lives a life without electricity and is at risk of attack from Native Americans at any moment. I think he may be up to something sinister and I don’t want to stick around to find out what it is. That being, although he may not be the best mascot he isn’t nearly as bad as RoMo and those sickly looking birds listed at no. 9 and 10. To really take Big Red over the edge, I’d suggest getting him sponsored by Big Red Chewing Gum TM, with logos slapped all over his deerskin clothes.

#5
Mascot: Tupper the Bulldog
School: Bryant University
I have nothing to say about this mascot. He isn’t cool enough to compliment nor awful enough to hate on — he is exactly average.

#4
Mascot: Kizer the Blue Devil
School: Central Connecticut State University
Kizer the Blue Devil has everything going for him. A strong name that emanates power. A good prop that can be used to impale other mascots, should he have the need. Manly facial hair that puts my peach fuzz to shame. But all of this is tainted by the fact that Kizer is just a rip-off of Duke’s similarly named “Blue Devil.” While I can’t look past this lack of creativity from CCSU, I am willing to put Kizer in the upper side of my rankings, because that smile of his is just so ravishing.

#3
Mascot: Frankie the Friar
School: St. Francis University
While the title of this mascot may not instill fear in opponents, the physical mascot definitely does. I don’t know what it is about this one, but his cartoon build somehow works out for him. I don’t know how historically accurate he is, but if friars actually wore crimson red robes back in the day then this is an even better mascot. While I do think the classic Friar Tuck combo of balding hair/bowl cut would complete the look, Frankie is easily one of my favorites.

#2
Mascot: Emmit S. Burg
School: Mount St. Mary’s
I originally had put Emmit a few spots lower in my list, until I noticed his name. Emmit S. Burg is a broken-up version of the location of Mount St. Mary’s: Emmitsburg. This may not be groundbreaking to hear, but the little joke shows that Mount Saint Mary’s respects mascot culture. As if that wasn’t enough, Emmit is wearing a cut-off flannel shirt, not just a normal cut-off, a flannel shirt that he decided to remove the sleeves from, which is even more hilarious. Lastly, he’s jacked. I don’t usually consider the physical strength of mascots when ranking them, but the dude looks like he could beat up an entire NFL offensive line.

#1
Mascot: Nitro the Knight
School: Fairleigh Dickinson
Fairleigh Dickinson’s mascot “Nitro the Knight” is everything a mascot shouldn’t be. This azure horse that’s built like a cinder block has almost nothing going for him. He isn’t really cute, fluffy, funny-looking or enjoyable. But somehow it works out for him. He has arms the size of “The Mountain” from Game of Thrones and looks like he takes creatine, which may not be healthy for horses. He scares me. Nitro takes the No. 1 spot in my rankings based on sheer intimidation factor alone.

While the mascots of the NEC aren’t super entertaining, it’s always refreshing to see them wandering football stadiums and basketball arenas during halftime creeping people out. Some of them are on the cusp of greatness, only requiring a name change or a handlebar mustache to be amazing, while others need to go back to the drawing board. Agree with our rankings? Let us know what you think.