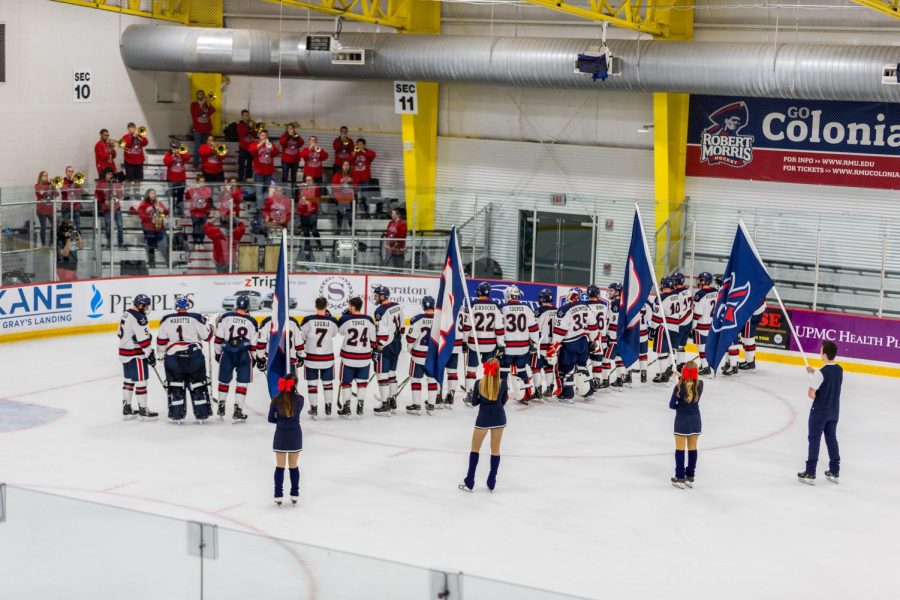 Moon Township, Pa.- A playoff-like game against rival West Point Army (1-2-1, 0-0-1 Atlantic Hockey) resulted in an unsatisfying 2-2 tie for the Robert Morris University Colonials men’s hockey team (1-1-1, 0-0-1 Atlantic Hockey) at Colonials Arena on Friday night. Three goals were tallied in the first period alone, kicked off by RMU. French freshman Justin Addamo scored his first ever goal as a Colonial 6:37 on a wraparound shot. Due to his massive reach being 6 foot 6 inches, this shot made it past Army goalie Trevin Kozlowski.

“I was really happy about it, happy to contribute towards the team and do my part,” stated Addamo when asked about his goal.

The Colonials didn’t have time to celebrate though, as roughly two minutes later at 8:25, Army tallied the equalizer to make it 1-1. The goal came off the stick of Trevor Fidler, a senior at Army. From then on it was all Army as they practically dominated the game in the late stages of the first period and all through the second.

However, RMU was able to get a power play chance late in the first with Marshal Plunkett going off for hooking. In a turn of events, RMU was outshot on their own power play 2-0 and ended up giving up a shorthanded goal to another senior, Tipper Higgins at 14:12. After the goal, the ice was tilted the entire second period to Army’s advantage.

“Our power play sucked the life out of us and gave up a shorthanded goal,” head coach Derek Schooley stated.

No goals were scored in the second however despite Army’s dominance in both the first and second. Army outshot RMU and limited the Colonials to only a single shot on net in the second. RMU goaltender Francis Marotte was able to stand his ground and in total stopped 26 of the 28 shots he faced.

“We definitely didn’t match their complete level the first half of the game, we got to bring it 60 minutes a night, not just the last 20-25,” stated junior Luke Lynch.

“In the second period we had I think only two or three shots on net so we have to fix that for tomorrow because their goalie gives a lot of rebounds,” said Addamo.

Late in the second period, RMU got a great opportunity for them to get back in the game. Army junior forward Michael Wilson was caught charging and given a two-minute minor with roughly a minute left in the first. The play was later reviewed and then found to be intentional head contact. Wilson was then given a game misconduct and the penalty turned into a five-minute power play for the Colonials, which would carry over to the third period. Alex Tonge was then able to score on said power play and knot the game up 2-2 at 1:12.

“With 5-minute penalties your not rushing as much to make plays so we got more confident and made the plays that were used to,” stated Lynch who tallied an assist on the Tonge goal.

The Colonials were back in the game and competing like they should have the whole game, however, it was too late as the buzzer sounded and the teams were set to go to overtime tied 2-2. In the OT frame, more of the same happened. The Colonials had some great chances but the clock, and goaltenders Marotte and Kozlowski prevented any scoring and the game ended in a 2-2 tie.

Schooley summed up the game accurately with the following statement, “I was encouraged by our 25 minutes to end the game but I was discouraged by our first 40 minutes…I think in every level of every sport if you don’t come to work then you’re probably going to lose and luckily we came to work for the last 25 minutes and got a tie out of it…I think this is all apart of growing pains with how many young kids we have.”

“We know we didn’t play our best hockey tonight so well just take the tie and be better tomorrow,” said Justin Addamo.

RMU will get another crack at Army tomorrow night where they will play their second game of a back to back home-stand with the team. The game will once again start at 7:05 pm and will be at Colonial Arena on Neville Island.