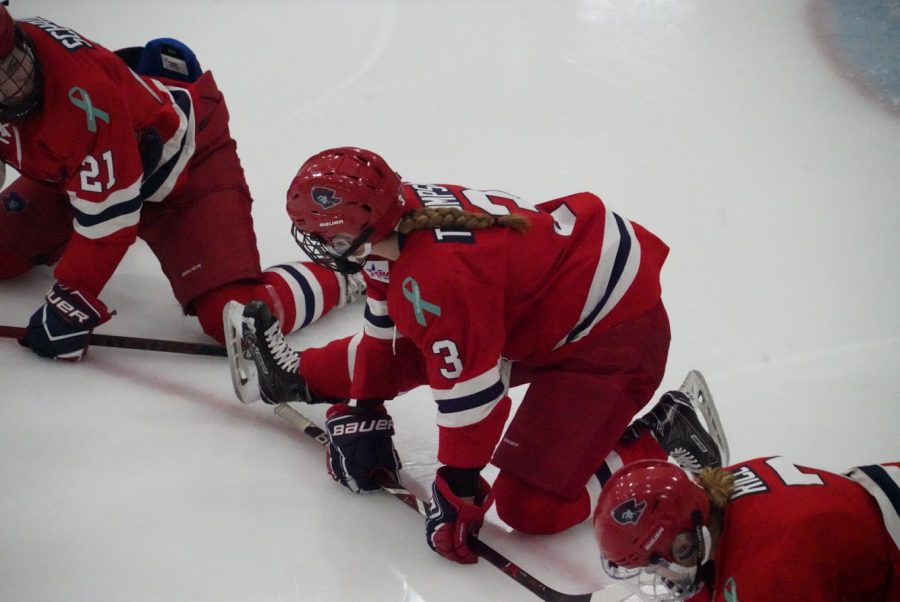 BUFFALO, N.Y. — It is hard to believe, but the college hockey season is quickly approaching the finish line. This week will be the College Hockey America (CHA) Tournament. This tournament will take place at the HarborCenter in Buffalo, New York. The Robert Morris women’s hockey team (15-13-6, 13-4-3 CHA) will have a bye in the first round after securing the regular season crown this past weekend. Defending CHA champions, the Mercyhurst Lakers (15-13-5, 12-6-2 CHA), will have the other bye. Now, let’s take a look at each team’s season and the first round games.
Lindenwood (7-21-4, 3-14-3 CHA)
Lindenwood finished in last place in the CHA this season, but this team is capable of surprising top contenders in this tournament. The Lions tied RMU twice and even secured victories over the Colonials and Mercyhurst earlier this season.

Lindenwood was third in conference play as they averaged 2.31 goals per game. This team also moves the puck around well too, they average 3.97 assists per game. Their opponent in round one will be Syracuse, who beat the Lions in all four of their meetings earlier this season. Despite the poor showing in previous meetings, do not count the Lions out this weekend.
RIT (12-17-5, 8-11-1 CHA)
The Rochester Institute of Technology (RIT) will play Penn State on Wednesday in a matchup between the four and five seeds. The Tigers have dropped three straight games as they head into the tournament. One of those losses was to their opponent on Friday, Penn State. They will be looking to put their recent slate of games in the back of their minds as they attempt to find success this weekend.

RIT ranks last in the conference in goals (1.94), assists (2.91), points per game(4.85), and shots (25). They also do not have one player in the top 15 in points in the CHA. They are 1-3 against the Nittany Lions this season but will look to reverse their fortunes on Wednesday.
Penn State (12-13-9, 6-9-5 CHA)
The Nittany Lions of Penn State will be the fourth seed for this week’s tournament.As mentioned earlier, they have had a tremendous amount of success against RIT so far this season. Although they are only the fourth seed, Penn State is a very competitive team. They managed a tie against the #3 Cornell earlier this season and split a series with #5 Colgate. Penn State’s goaltending is exceptional, allowing an average of 1.91 goals per game. They also find a way to stay out of the penalty box as they only serve around three penalties a game. The Nittany Lions will likely be moving on and playing past their first-round game on Friday.
Syracuse (10-21-3, 10-8-2 CHA)
Syracuse will look to play spoiler in this year’s CHA Tournament by trying to upset Mercyhurst and Robert Morris. The Orange have defeated the CHA’s two top teams a combined three times this year, including a weekend sweep of Mercyhurst in Erie. An interesting fact about Syracuse is that they won zero games outside of conference play.

Take that as you will, but that means they found success in conference play. That is very important as they head into the conference tournament. The team’s star player is Allie Munroe, who ranks seventh in the CHA in points. The Orange struggle offensively, but Monroe has remained a consistent threat on the ice. Look for her and Syracuse to potentially carve their path to the championship on Friday.
Mercyhurst (15-13-5, 12-6-2 CHA)
The defending CHA champions earned a bye for the first round of the tournament this year and will take on the lowest remaining seed on Thursday. Mercyhurst finished just three points behind the Colonials for the regular season title, and they will want to upset them for the second year in a row on Friday.

The Lakers narrowly score the most goals per game in the conference as they find the back an average of 2.6 times per game. They allow 2.57 goals per game as well. Mercyhurst played an extremely difficult non-conference schedule as they played powerhouses Wisconsin, Minnesota and Colgate. They also split their season series with Robert Morris in what is likely a preview to the championship game. Emma Nuutinen and Summer-Rae Dobson each have 25 plus points and rank third and fourth in the CHA in points. Look for them to have a big factor in the action this week.
Robert Morris (15-13-6, 13-4-3 CHA)
Robert Morris is out for revenge as they enter the CHA tournament with a three-game win streak. Those wins are against perhaps their biggest adversaries in this tournament, Syracuse and Mercyhurst. The Colonials tied top ten teams, Colgate and Cornell, this season.

Robert Morris has the CHA’s top two points leaders on their side too. Jaycee Gebhard and Lexi Templemen will look to propel RMU to a conference title. Gebhard’s 49 points and Templemen’s 31 points have given the Colonials a big edge over their conference foes all season long.

Templemen tallied 25 assists this season, but she is not the only one moving the puck around well. RMU averages 4.41 assists per game which is the best in the CHA. The Colonials also lead in shots per game as they always find a way to keep up the pressure on opposing teams.
Prediction
After upsetting RMU last year, look for Mercyhurst to once again find themselves in the championship. I believe it will be a rematch of last year as RMU will take on Mercyhurst for the CHA title. Syracuse could turn some heads and potentially find a way into the title game, but that would be a big upset. I expect Penn State and Syracuse to get wins on Wednesday, then Mercyhurst and Robert Morris winning on Thursday setting up for a huge game on Friday afternoon. Robert Morris will avenge their defeat last year and beat Mercyhurst in a close game.