A near perfect Petteway propels the Colonials to second straight win 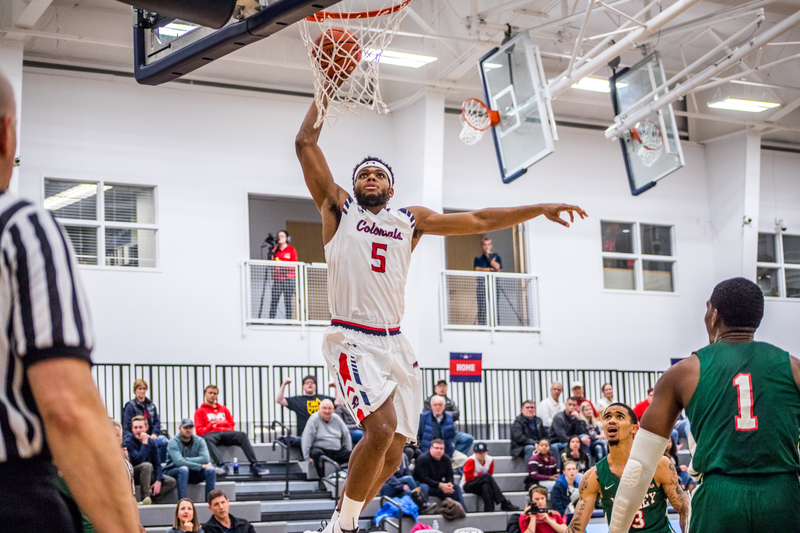 MOON TOWNSHIP— It was a sluggish start for the Colonials in this one as they missed five of their first six shots and committed four turnovers as they would trail the Delta Devils 7-3 in the first 3:30 after their 104-57 offensive explosion against Mount Aloysius on Wednesday.

And while it was a brief stumble for Robert Morris, from there, the Colonials would take control of the middle of the first half. From the 16:27 mark to the 10:31 mark of the first half, Robert Morris would go on a 20-5 run. During the run, RMU went a perfect 8-for-8 from the field including 2-for-2 from three-point range. They would commit just one turnover on the run and saw scoring from five different players highlighted by the eight points from senior forward Malik Petteway who finished the first half with 12 points and going a perfect 5-for-5 from the field.

The end of the run would result in the Colonials holding a 23-12 lead and appearing very comfortable out on the floor.

But despite the big run from the Colonials, the Delta Devils refused to let the game slip away from them. Led by the scoring efforts of Dante Scott and Jordan Evans who had 10 and nine points respectively, Mississippi Valley State battled to get back within three points with just 1:02 remaining in the half, significantly cutting down the 11 point lead once held by the Colonials. Robert Morris would battle to get three more points before the end of the half to take the 37-31 lead going into the locker room.

“We built a couple double-digit leads and they continued to fight back,” said RMU head coach Andy Toole. “When we came out early in the game I thought we found some really good looks that we were able to make, gave us like a 20-10 point lead.”

Going into the start of the second half, the Colonials would come out firing, slapping five quick points on the board as McConnell would open with a three-pointer followed up by a Jon Williams layup. But the story of the night continued to be Malik Petteway, who continued to light up the scoreboard for the Colonials. At the 11 minute mark in the game, Petteway’s stat line showed a perfect 9-for-9 from the floor, 20 points and eight rebounds as Robert Morris held a comfortable 52-37 lead.

“Malik (Petteway) with a super impressive performance on both ends, rebounding as well as shooting. So thank goodness for him,” said Toole.

But it didn’t matter what the rest of the Colonials were doing on the court, Petteway continued to remain perfect while his teammates made enough happen both offensively and defensively to keep RMU comfortably in the lead. Petteway saw his first miss of the game come from the free throw line, but a lane violation from the Delta Devils gave him another shot and another point as if the previous miss had never happened.

The Colonials would take a timeout with 4:48 remaining in the game and a 64-54 lead while Petteway was 10-for-10 and along with 6 free throws gave the senior forward 26 points.

“I was just going in at practice, going hard, taking good shots and my teammates helped me, they pushed me I think contributed to me going 10-for-10,” said Petteway.

Mississippi Valley State teased a comeback when the Delta Devils climbed back within six points of the lead with 3:08 remaining in regulation. But quickly ending any thought of a comeback was the NCAA single-game three-pointer record holder Josh Williams who knocked down his third three-pointer of the night to put Robert Morris back up by nine.

From there, it was too little too late for any sort of MVSU comeback as the Colonials would pull out the victory 68-59 to win their second straight.