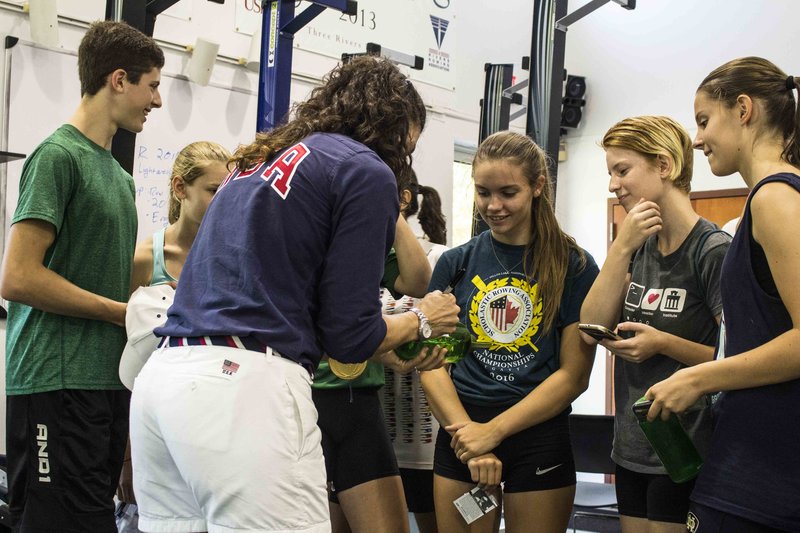 Pittsburgh, the City of Champions. The city has seen its fair share of sports legends through the years – Mario Lemieux, Joe Green, Roberto Clemente, Arnold Palmer, and plenty more. While these icons have brought home countless pennants, trophies, and cups, there has been something missing from Pittsburgh’s trophy case for a long time: a gold medal

And not just any gold medal in particular: a rowing gold medal.

For while Pittsburgh may be known for its football, hockey, and baseball, there is a whole community of rowers, young and old, working silently and unnoticed in the background. Up before the crack of dawn, these athletes push their minds and bodies past their physical limit. Competing regionally and nationally, they have brought honor and accolades to their community and city.

However, due to a lack of presence at the Olympic Games and on the national team, the Steel City has never been viewed as a real contender. But thanks to one particular oarswoman, that stigma has changed forever. Amanda Polk is her name, and she is Pittsburgh’s newest sports star.

Polk, a native of Bloomfield, began her rowing career at Oakland Catholic High School. Rowing on the Allegheny River, Polk quickly excelled at the sport due to her athleticism and drive. By her senior year, she was already catching the attention of US Rowing and earning the right to compete at the World Junior Championships that summer. Though her crew did not medal, she attributes that race as the start of her Olympic dream.

After high school, she went on to row at the University of Notre Dame, where she helped her crew clinch the club’s first-ever bid to the NCAA Finals. Upon graduation, she continued to work with the national team, competing at the World Championships in the United States’ First 4+’s and First 8+’s.

While she was highly skilled and decorated, Polk failed to make the cut for the 2012 Olympic Games held in London, England. There she served as an alternate but did not get to compete.

Taking some time to soul search, Polk headed home to Pittsburgh. After careful consideration, she was determined to make her Olympic dream come true. She got to work, once again. Working out at Three Rivers Rowing Organization, the biggest rowing club in Pittsburgh, she inspired those around her with her positivity, humble nature, and determination.

On Saturday, August 13, 2016, that hard work paid off and dreams became reality. Thousands of fans tuned in at 10 am to watch Amanda Polk and the rest of her crew blaze across the finish line and into Olympic history. The United States Women’s 8+ won its third consecutive Olympic gold medal and tenth consecutive world title that day, becoming one of the “greatest sports dynasties of all time.”

Arriving home, Polk received a well-deserved hero’s welcome. Young and old rowers alike gathered in awe to hear the face and heart of Pittsburgh rowing share her story, of the ups and downs she faced, and lessons she learned. She also told of the amazing support she had received from Pittsburgh, and how much it meant to her.

“I am honored to have represented my country, my family and my rowing community in Rio. Rowing is not considered a ‘mainstream sport,’ but it is one of the oldest Olympic sports. To come home to Pittsburgh and to the Three Rivers Rowing Association and share my boat’s accomplishment was all a part of my dream come true.”

Polk has reached her dream and now has inspired the next generation of Pittsburgh rowers to go after theirs. They may not always get the credit or attention they deserve, but they will never let that stop them.

Amanda Polk is confident that these kids will succeed.“High school and college can be a very overwhelming time in your life. It can be very simple, though. Make small goals in order to tackle your overall goal. It will take hard work, patience, and sacrifice. Ultimately, when that goal is reached, all of your efforts will feel worth it. Stay true to yourself. Never give up. Dreams DO come true!”

Pittsburgh has finally made it onto the rowing map, and it was all made possible by the amazing effort of one brave oarswoman.