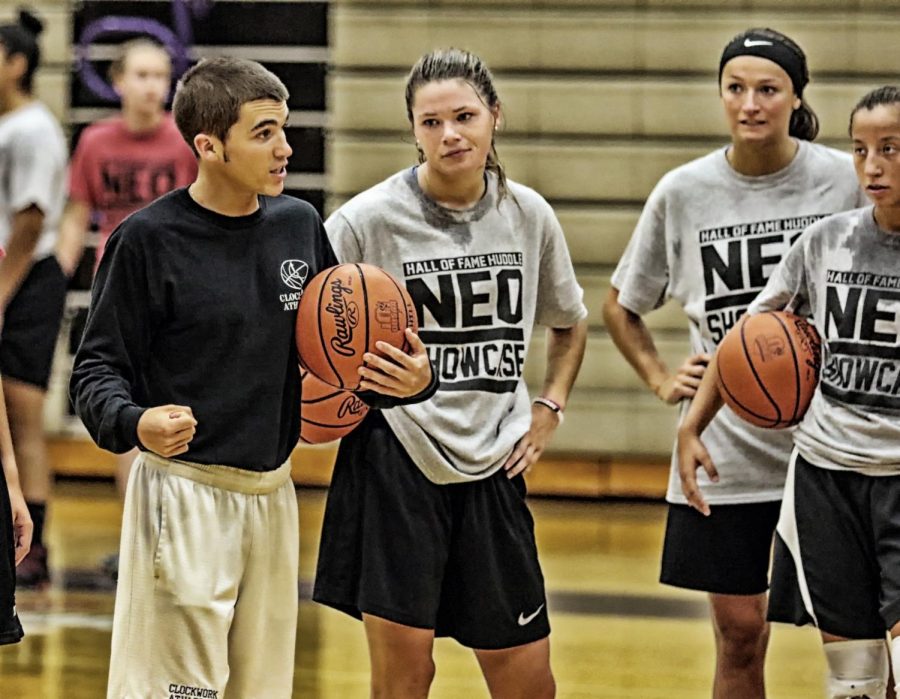 Over the past few months, Anthony Pugh has shown tremendous upside with his company called Clockwork Athletics. Pugh began his basketball career at a young age and continues to play the game he loves today. As a senior, Pugh has already created one of the premier basketball camps in Ohio. He hopes to continue his up-and-coming business after graduation in May 2019.

One-on-one training consists of a custom training program designed by Pugh to fit an individual player’s wants and needs. Being in an uptempo style of play will increase the development of the player and change his or her game for the better. Pugh uses different drills based on the position an athlete plays.

Clockwork Athletics trains players of all ages, from young and upcoming players to professional players. As for the players who have the most success, “I would probably say younger players just because when you’re younger you’re easier to mold and to teach new things. When you become older some kids become set in their ways, which I try to change and do change the majority of the time, but there are occasions where kids don’t want to change.” said Pugh. He also pointed out that younger kids are pretty much open to anything to increase their basketball development.

Pugh has been playing basketball ever since he was a little kid, but his best basketball experiences came in high school and college. Pugh said the following about his experiences, “I went on and played for Mcdonald high school, scoring one thousand points there, 400 career assists, and I used to have the all-time wins record, but actually it got broken last year by a younger kid, so my high school career was pretty successful I would say. I came to Robert Morris as a walk-on my freshman year.”

Pugh then explained why he chose Robert Morris University over some top Division II schools and Division III schools. He said, “Being young you always wanna go to a Division I school, it’s the kind of the dream when you’re playing basketball, so that was always kind of my goal. Ultimately, I really really wanted to play, you know I worked extremely hard, and I think I could play at that Division I level.”

His goal with Clockwork Athletics is to help kids of all ages reach their full potential and to have a success story of their own.

During his freshman year at Robert Morris, Pugh met Junior guard Kavon Stewart who was struggling with his jump shot at the time. “When I first got there, “K” kind of seemed like a real bad tough guy, so I’m not gonna lie when I first met him, I was a little bit intimidated by him,” said Pugh. “He was the starting point guard so you wanna get respect from guys like that. I would be on the practice court before anyone else. I would get my shots up, do my left and so on. Eventually, he kind of started to come out with me. He would be on one hoop and I would be on the other hoop, and we were just looking at each other, and I’ll never forget the one time I dropped my ball and went down and started to rebound for him. Ever since then he would come to my hoop, so I started putting him through different finishes around the rim and shooting drills.”

After putting him through these different types of drills, Pugh saw an all-around increase in Stewarts’s shooting percentage. Ultimately, this is what got Pugh thinking of helping other players around the Ohio area and to create the company we know today called Clockwork Athletics. Pugh and Stewart are still good friends to this day.

RMU provides great leadership inside and outside the workplace. Pugh is definitely an example of this. “RMU has helped me tremendously. I think more so the connections, the people I’ve met, Coach Toole, being apart of the Division I program for a year really showed me how good players are and how good you have to be to play at that level. The leadership aspect has really helped me in the business world, dealing with people, communicating with different students on campus, different professors on campus and then being able to take that into my business and dealing with parents and kids of all ages.” said Pugh. He hopes to carry on his Robert Morris education on and off the court.

Based on his accomplishments in life so far, Pugh doesn’t believe he has found his greatest success story yet. Reaching one thousand points for his high school team was great, he says, but that is not one of his greatest success stories. Pugh hopes that one-day Clockwork Athletics will become a success because that is what he is all about. If it ever comes down to it, Pugh would train athletes of all ages but doesn’t plan on becoming a coach. From his point of view, coaching and training are two completely different positions.