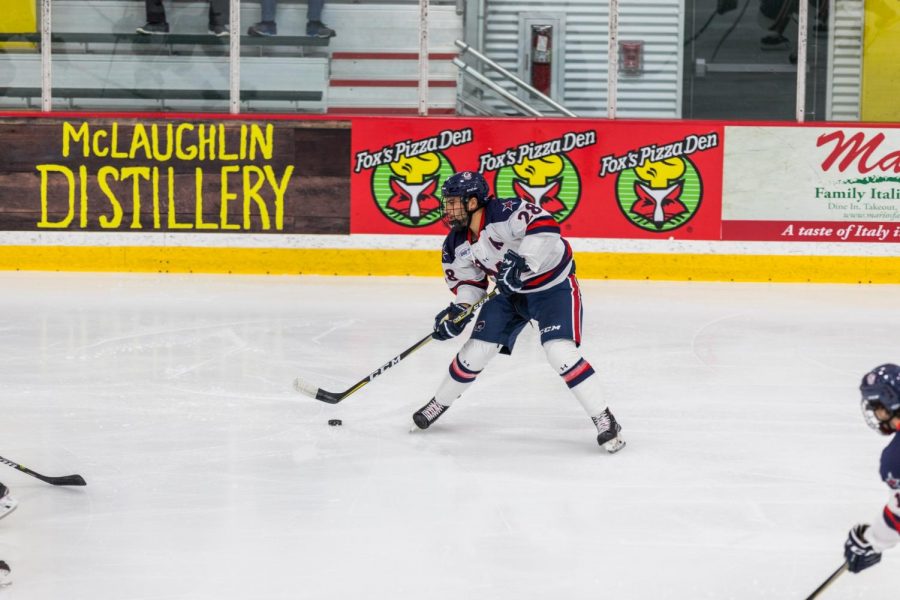 PITTSBURGH– On Saturday, the Robert Morris University men’s hockey team (1-2-1, 0-1-1 AHC) took on the Army West Point Black Knights (2-2-1, 1-0-1 AHC) for the second night in a row. The Colonials and the Black Knights played to a 2-2 tie on Friday, but the Colonials dropped the Saturday’s game 5-2.

Early in the period, both teams had a bit of penalty trouble as both teams had one penalty in the first eight minutes. The Black Knights got on the board first as Eric Butte scored his first goal of the year on a one-timer after a pass from Alex Wilkerson to make it 1-0 Army. The Colonials tied the game with 14:48 remaining in the period, as Nick Prkusic fired a rocket past Army netminder Trevin Kozlowski.

With exactly three minutes remaining in the first period, Army forward Colin Bilek would be called for slashing. RMU freshman Justin Addamo would add to the Colonials lead,  when he parked his six-foot-six frame in the slot, and put home a pass from Michael Louria. Francis Marotte would make an excellent save on Brendan Soucie with just over a minute remaining as his wrist shot was snared by Marotte’s glove hand.

After one period of play, it was the Robert Morris Colonials on top of the Army West Point Black Knights by a score of 2-1. Addamo and Prkusic were the goal scorers for the Colonials, while Butte added the lone goal for the Black Knights. This was Butte’s first goal of his collegiate career.

Alex Tonge, Nolan Schaeffer (originally Nick Jenny), Louria and Alex Robert all had assists for the Colonials. Robert Morris outshot Army 11-9 in the period, and Marrotte made nine saves in net for the Colonials. The Colonials were 7-13 in the faceoff dot, and 1-2 on the power play in the first frame. Army captain Taylor Mauria had two of the Black Knights’ five blocks in the period. Aidan Girduckis would go off midway through the frame with what seemed like a lower-body injury. Coach Derek Schooley said that “We’re a little beat up on the blue line, and we will have to take it day to day with Aidan.”

Marotte would be called on early in the second, for the Colonials, as he made four saves within the first three minutes of the new frame. At the 17:20 mark in the second, there was a bit of a skirmish in the Robert Morris end, and Sean Giles ended up going to the box for two minutes on a slashing call. The Colonials would kill off the penalty and Army would get four shots off, but only one hit the net.

Army would appear to tie up the game with 7:19 when a diving Tucker DeYoung would put a shot five-hole past Marotte, but the goal would be called back after a hand-pass. Luke Lynch would have a great chance for the Colonials after a Prkusic hit would free up the puck, but he would shoot it high and wide over Kozlowski’s right shoulder.

At 5:37, Robert would be given a two-minute minor for roughing after an Army player ran over Marotte. With 2:30 remaining in the period, Army would tie it up for sure, when Cody Fleckenstein found Zach Evancho, who put the puck behind Marotte. The Black Knights of Army would gain the lead on a power play after a slapshot by John Zimmerman would find the top corner of the net. Zimmerman’s goal was scored with 12.8 seconds remaining and was his first career goal.

Through two periods, it would be 3-2 in favor of Army. Robert Morris was heavily outshot in the period, 13-5, and was sent to the box three times, killing two of them. Zach Evancho and John Zimmerman were the two goal scorers for the Black Knights. The Colonials were 11-17 in faceoffs for the period, and Nick Prkusic was at a perfect faceoff percentage, winning all seven of the draws that he was in.

The Colonials would get some pressure early in the third, as Jenny, Louria and Schaeffer all had shots within the first minute of the period. The Black Knights would make it 4-2 with 16:53 remaining in the period as Colin Bilek would fire a laser into the top corner of the net for his second of the year.

A Sean Giles penalty would cancel out an Army goal midway to the third as he was sent to the box for hooking. On the ensuing power play, a shot by DeYoung would beat Marotte, but not the iron, as it careened to the side boards. After a Colonials penalty, the Black Knights would add another insurance goal, as Dominic Franco would tip a pass behind Marotte with 5:48 remaining. The Colonials would switch goalies with less than five minutes remaining, putting in freshman Reid Cooper. Cooper had .905 save percentage last year with the Coquitlam Express of the BCHL. At the final whistle, the score was 5-2 in favor of the Black Knights.

In the third period, the Colonials were outshot 13-6. Francis Marotte made 11 saves in net, while Reid Cooper saved the only shot he faced in relief of Marotte. Tonge and Addamo each had four shots. Prkusic was 10-11 on faceoffs in the game.

The Colonials are back at Colonials Arena on Oct. 27 and 28 for back to back games against the RIT Tigers (2-1-0, 0-0-0 AHC). Captain Brandon Watt said that “We have to take the loss to heart, but we have to learn from it and be ready for RIT… we’re a lot better than we showed tonight.”