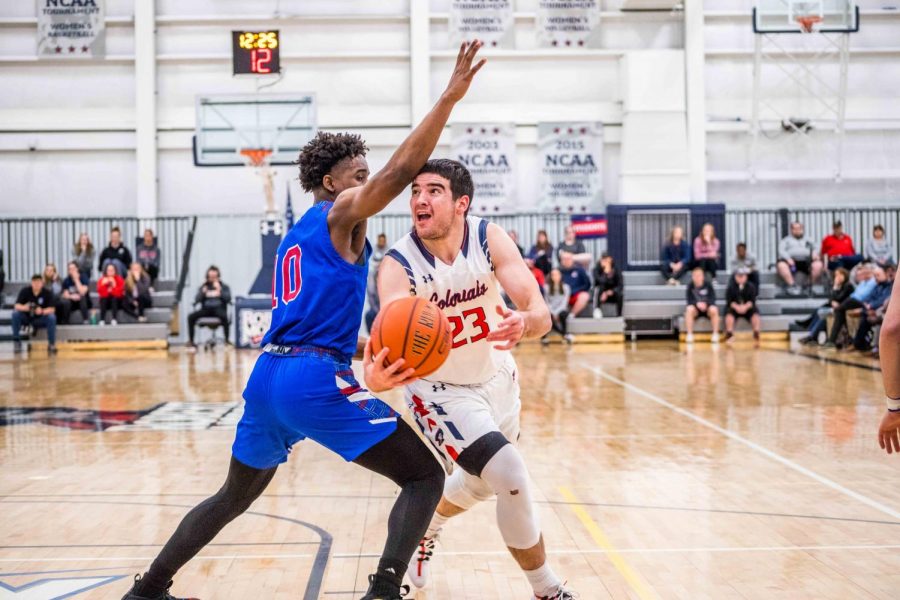 MOON TOWNSHIP– The RMU Men’s basketball team’s (18-16, 11-7 NEC) season came crashing to a close on Sunday afternoon after falling 77-70 to the Presbyterian College Blue Hose (20-15, 9-7 Big South) in the second round of the Collegeinsider.com Tournament. Presbyterian previously defeated Seattle University in their first round matchup 73-68, and RMU defeated Cornell in their first round matchup 98-89 in overtime.

The first half was mostly even for both teams. Each team traded a lead quite a bit early on, as the score was 25-23 in favor of the Blue Hose. After the media timeout, however, the Colonials took control of the first half, going on a 19-8 run to end the quarter, capped by a Malik Petteway three-point buzzer beater to send the Colonials into the locker room up 44-31. JC Younger led the Blue Hose with nine points, and Koby Thomas, who finished the half with two flamboyant dunks, was first for the Colonials with eight points.

“We got lackadaisical,” said senior guard Matty McConnell. “We know they were a good shooting team, they just came out and hit shots.” While the Colonials did briefly regain the lead at the 12:05 mark, the Blue Hose continued to dominate the second half, pulling away in the waning minutes. The Blue Hose would go on to win 77-70.

Adam Flagler and Francois Lewis shared the points lead for the Blue Hose with 19. Lewis went 5-for-8 from beyond the arc, and paired with JC Younger also going 5-for-7, they accounted for 10 of Presbyterian’s 14 three-pointers in the game, keeping pace with PC’s shoot-first mentality.

“We talked about their ability to make threes,” said head coach Andy Toole. “That really was the difference in this game.”

Charles Bain led the Colonials with 14 points in the contest. As for Matty McConnell, he exited the court to a standing ovation, as Dante Treacy substituted in for him with seven seconds left in the game, officially closing the book on McConnell’s RMU basketball career. In addition to reaching the 1,000 point plateau for RMU, McConnell is one of two players in the history of the program to notch 1,000 points, 500 rebounds, 300 assists and 200 steals, joining Jeremy Chappell in an exclusive club.

On McConnell, coach Toole said it would be tough to replace him, “We’re obviously going to miss those qualities. He became very consistent this year, which was his best season.”

RMU will open their 2019-2020 season in the brand new UPMC Events Center on November 12th against the University of Pittsburgh.