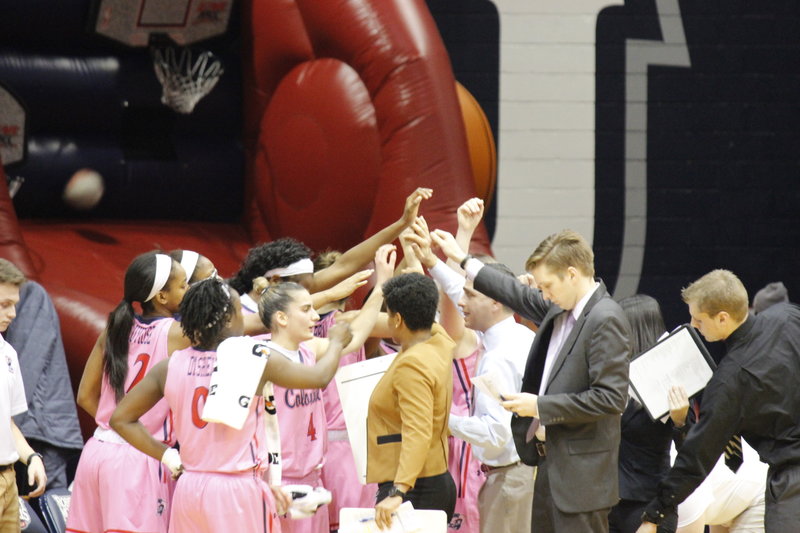 The Colonials are on a roll, which continued Monday evening as Robert Morris steamrolled the Mount St. Mary’s Mountaineers 70-58.

Since January 16, the Robert Morris University women’s basketball team has been an unstoppable force in the Northeast Conference. Having racked up seven straight wins and a spot tied for first with four games left to go, the timing almost seems cinderella-like as these Colonials have transformed from a middle of the pack nobody, back into the conference front-runner which everyone expected them to be.

They continued their streak of excellence with a stellar first quarter which put Robert Morris ahead 39-23 on an underrated Mount St. Mary’s squad which sits with a 7-6 record in conference.

Nneka Ezeigbo and Megan Smith dominated the first half for the Colonials. The two combined to go 8-for-10 from the floor for 20 points including a perfect 5-for-5 from Ezeigbo.

“She did a good job of really doing things one step at a time,” said coach Buscaglia “She caught the ball well today for the most part and really took her time and focused on finishing around the basket”

Ezeigbo would finish with 16 points going 7-for-8 with three rebounds and a block on the night.

When asked about her performance, Nneka Ezeigbo said the key was “Staying confident and doing my best to finish…knowing that my team has my back so when I go to the basket if I miss just to keep going after it.”

Mount St. Mary’s head coach Bryan Whitten was beside himself with his team’s performance, his voice was one which echoed all throughout the Charles L. Sewall Center as his team attempted to climb back from the depths of a 16-point deficit.

But just as things seemed to be shifting in favor of the Mountaineers, head coach Charlie Buscaglia was there with the punctual timeout to put his team back in perspective and remind them their need to finish the game strong.

The first year head coach showed his maturity and experience beyond his years by calming the frustrations and making the focus clear. These players knew what they had to do.

“I used a lot of my timeouts because we weren’t handling their scrambling well’ said coach Buscaglia “Mount St. Mary’s has been known to do that kind of running around and doubling and making things real crazy…at the end, we gained control of things again and we finished the game”

And while senior stars Anna-Niki Stamolamprou and Rebecca Navarro continued to struggle throughout this game, RMU did what has carried them to their 7-game win streak month. By simply reaching to their bench and letting the whole team step in to fill the void.

Robert Morris saw points coming from nine different players including 24 points from the bench. And while the Colonials did not bring their lead any higher, they finished the job and made a statement against a strong conference opponent.

A scare for the Colonials as towards the end of the fourth quarter senior guard Anna-Niki Stamolamprou went hard to the floor holding her head. her status for Saturday’s game against Central Connecticut State remains unknown.

Five games left to play in the regular season, with the conference title within reach, The Colonials look to end their season with one of the longest winning streaks in their program’s history.