Bulldogs take a bite out of the Colonials 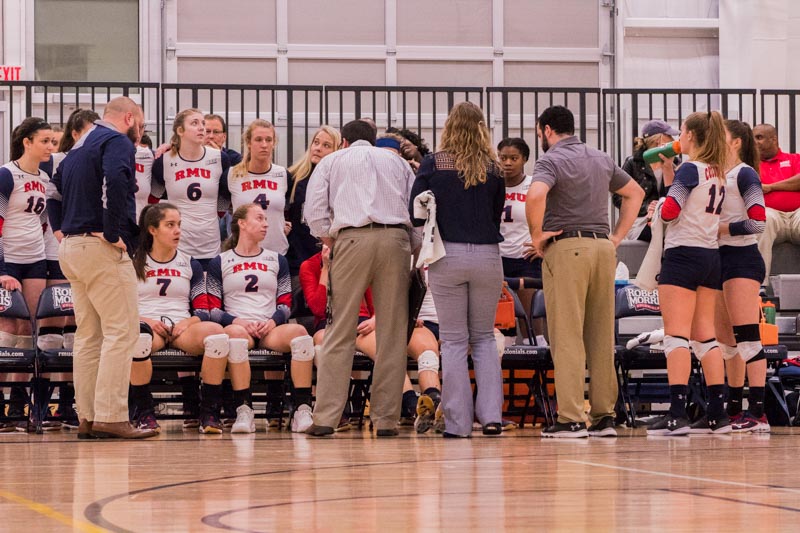 The Colonials started off in their usual fashion: shaky. Leaving Coach Dale Starr anything but impressed. Before anyone knew it, the score of the opening match was getting away from the team six to three.

Finally, having seen enough, Coach Starr called his first timeout at nine to five, and not in favor of the Colonials. The timeout, however, did little to settle the team. Coach Starr made some interesting player trades that we haven’t really seen much of all season. Mirna Sarjanovic took the place of Alyson Londot early in the first set, as well as freshman Erika Wilt taking the libero spot of Allie Yurkovich tonight due to an injury that the libero sustained during their last matchup.

Emma Granger was also replaced tonight, by Skylar Clements. But even with these changes, RMU failed to battle back, causing Coach Starr to call his second time out of the opening set. This first-set Colonials team was looking a lot like the second and third-set team from their game against SFU last Friday. This being said, the Colonials took the hit, losing the opening set 25-17.

“You gotta play who’s going to be able to show up and make plays. Emma wasn’t making plays today, it’s the first time that she’s really struggled that badly. But a message has to be sent that she has to make plays. And I thought that Skylar did a fine job coming in. It’s nice to have her, she’s been having good practices, and getting better and better and it was good that she was able to come in and compete and play. We’ve got to be able to have the next person up when somebody’s not executing, and those people that aren’t executing have to be able to understand that they have people behind them that want to get on the floor,” Coach Dale Starr said.

The Bulldogs seemed to be playing with an energy that RMU lacked. The part that was troublesome was that the Colonials were letting it rattle them. Robert Morris still was trailing Bryant by two, but their defense was improving slowly but surely, but not enough. RMU was in a four-point deficit, and they were not looking like they were going to be able to get themselves out of it. It was when they increased the depth of their hole to five points that Coach Starr called his third timeout of the night.

The Robert Morris team that we’ve all come to know as energetic and persistent was sluggish and undisciplined. They were not moving their feet and getting to where they needed to be on the court. Instead, always seeming to be a step or two from where they needed to be. It almost seemed like they were giving up way too early on plays. Their efforts falling short in the battle for almost every point. RMU was defeated in the second set of the night 25-19.

Going into the third set, it was looking grim for the RMU Colonials and like an early night for the fans. Junior Taylor Lord’s frustration was clear on her face, as well as her coach’s. Where the Bulldogs so clearly had the advantage, tonight was their defense. The Colonials were getting good competitive hits off, but the Bulldogs were showing their discipline by not only beautifully passing the team’s hits but also coming back to capitalize on them as well. Coach Starr called his fourth timeout of the set when the score was 13-10, and in favor of Bryant.

This was still looking like an early game for this RMU team. Robert Morris was able to come back to trail by only two, the shortest deficit so far that they’d had since each set had started. The team was fighting to come back with valiance, but would it be enough to force this match into a fourth set? The crowd of spectators that had gathered sure hoped it would be so. It was in this third set that Starr called his fifth timeout. And although they tried, the Robert Morris Colonials were not able to push for a fourth set, instead losing in three with a final set score of 25-20.