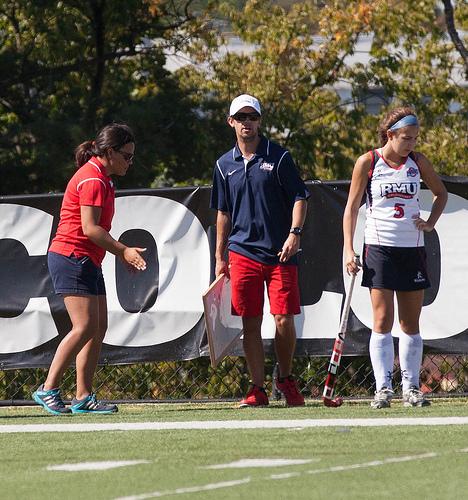 While working in sport development with the local government in Australia, Robert Morris field hockey assistant, Lindsay Burrows, knew he wanted to stay with the sport that had enabled him to travel the world as both a player and coach.

But he was unsure of what direction to take, until he became aware of an opening at RMU.

“I’ve been different places to coach hockey, and I’ve moved back to Australia, and had been there for about two years or so. I realized that I sort of wanted to stay with hockey, so this opportunity came up, and I sort of just grabbed it with both hands,” said Burrows, who received the Player’s Award for the Australian Country team in 2008. “It was something that I was definitely considering, and the timing just worked out really well. I’m very happy to be here now.”

Hired by head coach Olivia Netzler in February, the former midfielder and defender had spent time in his native country developing amateur clubs and sourcing major sporting events throughout the region before coming stateside.

“We [Netzler and I] had similar backgrounds in Australia, but we are from geographically fairly far apart,” said Burrows, whose homeland of Tamworth is 250 miles north of Sydney, Netzer’s stomping grounds. “It was just one of those things that lined up, the opportunity, I just became aware of it, and applied like everyone else, got the job, so here I am.”

“Lindsay brings a lot of maturity to the team. He has a lot of knowledge and I think it’s his biggest asset,” said Netzler, who enters her seventh season behind the helms for the Colonials. “The girls respond really well to him, and I think overall, he just brings a great deal of maturity to the sport and a whole lot of knowledge that we can turn to when we need it.”

Defender Simone Bindels said that Burrows’ extensive playing career in the Netherlands, which is her home country, can not only help to make the team better defensively, but aid her game as well.

“He has a lot of international experience, which will help us through the season,” said Bindels, a freshman. “It will help the team in general, and help us too because he just knows our way of hockey in the Netherlands. He gives advice about the differences between the countries.”

Due to his extensive knowledge of the sport, Burrows is eager to bring the techniques he’s learned overseas to the Colonials during their first year of play as an associate member of the Metro Atlantic Athletic Conference.

“I just think it’s about setting a simple structure that can be relied on by the girls throughout the entire season. I’ve had experience at this age level, but this is my first collegiate coaching experience,” he said. “As a team, we’ve gotten together and we’ve set certain goals that we want to achieve this year. They’re working really hard towards it, and it would just be great to sort of facilitate in their success.”