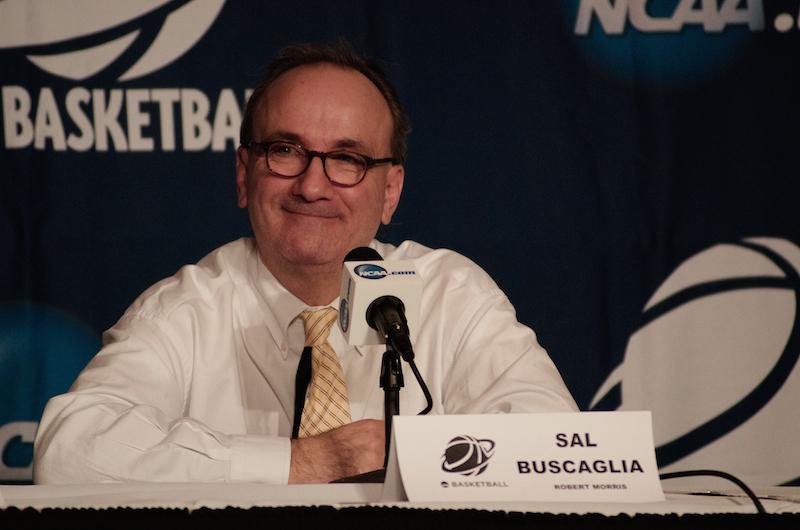 The Robert Morris women’s basketball program enters the 2014-2015 season as the preseason favorites of the Northeast Conference.

However, they will be without Artemis Spanou for the first time in four years.

Averaging 19.4 points and 14.5 rebounds per game, Spanou led RMU to an NEC championship and NCAA Tournament berth, and everyone, including her old head coach and teammates, understand what they are losing.

“We’re going to have to play different,” said head coach Sal Buscaglia. “We can’t just go inside to Artemis and out and let her create because she’s not here. She’s not walking through the door.”

One person around for a few more years to come is sophomore center Cassie Oursler. Benefiting from the playmaking abilities from Spanou in her freshman season, she will be a main component of RMU’s new look team.

“We have to pick up her points that [Spanou] had and her rebounds that she had,” said Oursler. “Obviously it’s not going to be just one person doing that, so we all have to even it out and find what we’re going to be most successful doing.”

Junior guard Ashley Ravelli is another player looking to help fill the gap in production left by Spanou, although she knows it will not be easy.

“All of us need to step up our game,” Ravelli said. “Of course, you can’t replace the double-doubles she used to give us, but if one of us scores a little more, get two, three rebounds more, we can probably work with that.”

In replacing Spanou, the Colonials will also look toward five incoming freshman to transition quickly into Division I college basketball.

“I think they’re getting there; some are making [the transition] a little bit easier than others,” said coach Buscaglia. “A lot of times it depends on their high school programs. I think they ought to get there, I just think that some are going to take a little more time than others.”

Among the freshman who have impressed so far, forward Megan Smith is a common name mentioned in the discussion. Oursler called her a “force in the post,” and Ravelli said she was doing a good job finding her role.

It is unreasonable to expect RMU to click on all cylinders right from the beginning of the season, and Buscaglia is taking that into the mindset he wants his team to have right now.

“Right now, we have to worry about our next practice,” he said. “We can’t really worry about even our first opponent. We just have to get better each and every day.”

The NEC looks strong as ever this season, and the Colonials will definitely be circled on every team’s calendar.

“The process is what’s important,” Buscaglia said. “If you focus on the process, the results will take care of themselves.”