Checking in on men’s hockey 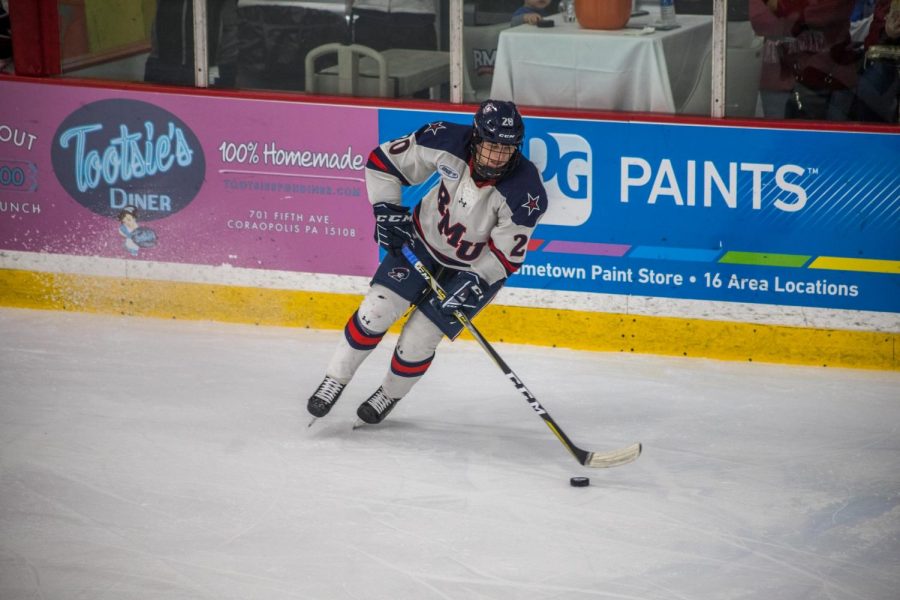 The Robert Morris Colonials men’s ice hockey team (2-3-1, 1-2-1) is practicing and working hard on all facets of their game. They are looking to build off of last weekend’s performance against RIT (3-2, 1-1).

Junior goaltender Francis Marotte had a 3-0 shutout in the first game, but let up an overtime goal for the second game that ended 2-1.

When asked about the teams performance through the year, specifically last weekend, head coach Derek Schooley said, “We have a history of guys who come here and put up a lot of points, but it’s a lot different this year because of the number of freshmen we have, and there is a learning curve for these incoming freshman.”

It is good to look at the positives of the young season, and Schooley makes a great point about the number of freshmen he puts out there each night.

Thinking positively or not, what isn’t positive is their lack of offensive production. They are only averaging 1.8 goals per game and only mustering up 25 shots on average through the first three weeks.

The highlight of their offensive production has been on their power play that has six goals (17.1%) and each goal was scored by a different player. Compare that to their even strength goal total of five, and it makes you scratch your head.

Forward Michael Louria has four points on the season and all of them have come from the power play. Obviously, it is never wrong to score points in any fashion, but the team as a group must be able to contribute in the even strength department as well.

Freshman forward Justin Addamo also has four points through six games which is a tie with Louria for second on the team, only behind Alex Tonge. When he was asked about his level of offensive production, Addamo stated, “I owe it to my team and the system I play in, but I don’t care if it’s me scoring the points, we just work together as a team.”

The Colonials will be looking to do just that, in ‘working together as a team’. They will be looking to shake off the rust from their first few games and look to carry their performance over from last weekend into this upcoming weekend against Niagara University (2-4, 2-2).

He also went on to say that their effort was increased in practice throughout last week and that it showed in the RIT matches, and he feels even better about this upcoming weekend.

The Colonials will look to keep their intensity up and work on staying out of the penalty box all while improving their even strength offense. The penalty box has unfortunately been a second home for RMU, as they are averaging six penalties per game. On the other hand, their opponents are averaging roughly the same, so there is some sort of balance on the special teams.

RMU continues their home stand against Niagara University this upcoming Friday and Saturday at Colonials Arena.