Clark: “It’s about being excellent in what we do” 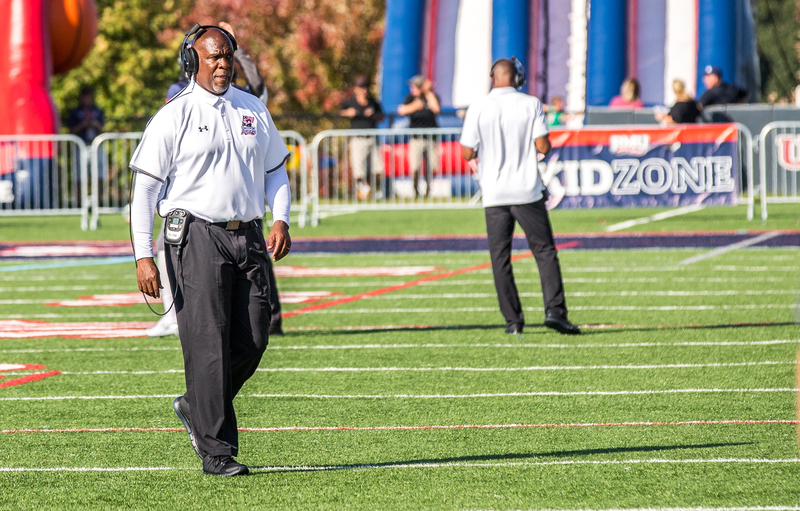 FAIRFAX, Va. — The Robert Morris football team (2-6, 0-4) has been officially eliminated from postseason play. The Colonials still have three games left to play including a chance to play spoiler to NEC front-runner, the Sacred Heart Pioneers (5-3, 3-0 NEC) on Saturday.

For first-year head coach Bernard Clark, if the Colonials want to come back from Bridgeport with the win, he believes they need to hold themselves to the same standards as their opponents do.

“I think what it boils down to more than anything else is that they are a disciplined team (Sacred Heart),” said Clark. “They do everything precise. So we have to make sure we are a disciplined team. That’s why we are practicing to do things excellent. We want to make sure our fundamentals are down, our technique is down. When you are a facing a team like that, that executes the way they execute, you got to be ready to take them on.”

Robert Morris displayed what was their best defensive performance of the season against the Red Flash this past week, limiting SFU to just 20 points, 329 yards and forcing two turnovers.

“I don’t know if it was great but we did better,” said Clark. “We played a whole lot better on defense.”

The discipline to which Clark referred was a point of emphasis specifically due to a large number of penalties accumulated by the Colonials last week. The numbers came to a total of nine penalties which cost Robert Morris 94 yards.

“To be honest with you, I mean I went back and watched the film, I didn’t see some of the stuff that the refs see but the refs called it and it’s no big deal to me. We can’t let that happen anyway, we have to be disciplined,” said Clark.

But perhaps the most shocking part of last week’s performance was the complete absence of the RMU offense that had been so dominant this season. The Colonials put up just 217 yards and seven points, giving the Colonials flashbacks to the dismal offense of last year’s John Banaszak coached team.

But notably, there were some key players missing.

Nominee for the Jerry Rice FCS Freshman of the year award Alijah Jackson was absent from the game and freshman sensation wide receiver Anthony Dellefemine was also unable to play.

“I’m still not sure what’s going to happen with Alijah (Jackson),” said Clark “It’s up to him, the trainer and me.”

But despite the struggles throughout the season, Clark said the biggest takeaway from his first season at the helm was his team’s improvement this season.

“We’ve improved over each week and week in and week out. But the biggest disappointment is that we aren’t winning games when we want to win games,” said Clark. “But the fact that we are improving and we’re getting better as a team and the culture is coming around to where it needs to be at, that guys are going to class, taking care of their business, those things are extremely important also.”

Just one more win will surpass the Colonials’ win total from the last two seasons which will be just a small victory in the first year of the Bernard Clark era, but certainly something worth noting.