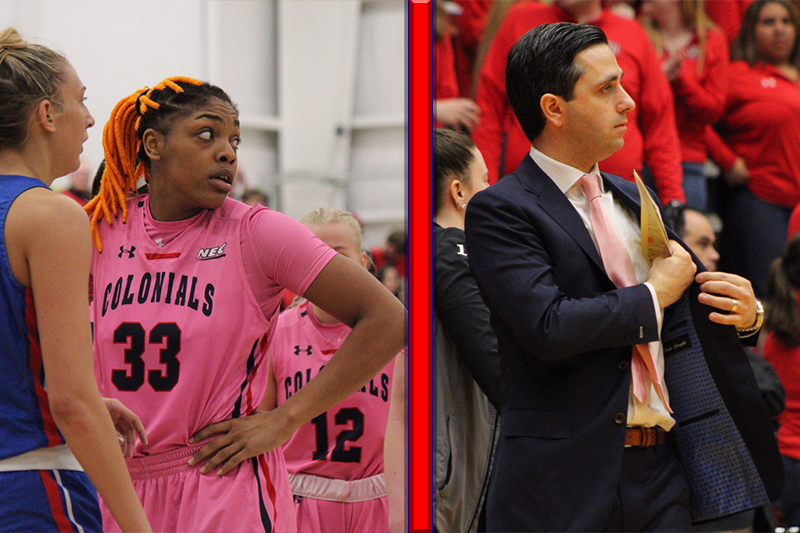 MOON TOWNSHIP — In three seasons as the head coach of Robert Morris women’s basketball, Charlie Buscaglia is already one NEC regular season championship away from his father’s, former Robert Morris women’s basketball head coach Sal Buscaglia, total of four championships. After leading his Colonials to their third straight NEC regular season title, the conference recognized Buscaglia with his third-straight NEC coach of the year honor. Alongside Buscaglia is star player Nneka Ezeigbo who received her own honors as Defensive Player of the Year in the NEC.

Buscaglia, in his three seasons at the helm, has amounted a record of 68-29 and 36-8 in conference play, the best conference record in the NEC in that time frame. This season, Buscaglia has put together a team that, led by their depth, opened up their conference season going 11-0, their best start in program history. RMU’s defense was not only the best in the NEC but ranked 11th nationally as they allowed just 55.1 points per game overall and ranked 24th nationally in turnovers forced per game with 20.45.

The face behind that defense was Nneka Ezeigbo. The junior center ranked fourth in the NEC with 1.3 blocks per game, seventh in steals per game with 1.7 and fourth in rebounds per game with 7.6. She put up those numbers with just 24.4 minutes per game. Ezeigbo is the only player in the NEC who ranks in the top-seven of both blocks and steals.

Ezeigbo becomes just the second Colonial all-time to earn the honor after Angela Pace earned the honor back in 2010.

Another notable Colonial receiving honors is freshman Isabella Posset, who earned herself a spot on the NEC All-Rookie Team.

RMU Sentry Media will be at the North Athletic Complex throughout the NEC Tournament with complete coverage.