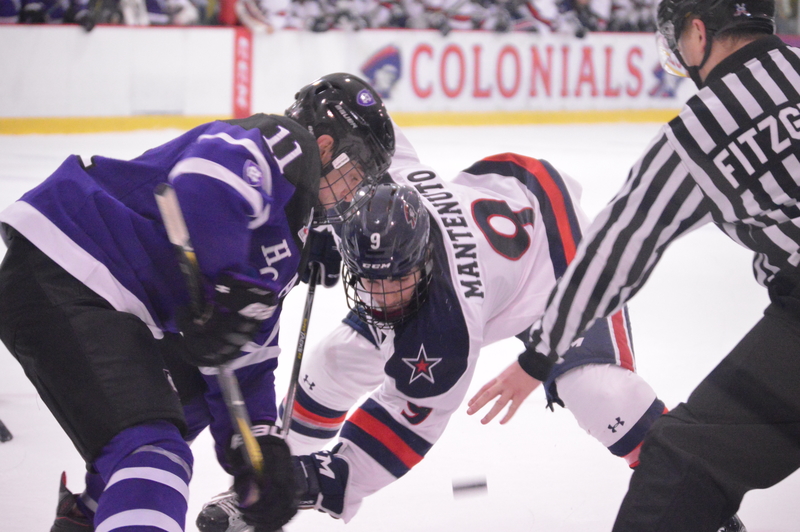 After a 5-5 tie on Friday night the Colonials were able to bounce back strong with a 3-0 victory. This win marked the first shut out for Robert Morris on the season, and it boosted their record to 3-5-1 overall with a 3-3-1 record within the Atlantic Hockey Conference.

Senior Spencer Dorowicz helped lead the way in terms of scoring for the Colonials as he netted himself a goal and an assist. These two points tied his season high for points in a single game, and they brought his points total for the season to six.

Michael Louria and Matthew Graham also helped the Colonial’s cause by pitching in two assists each. Another key performer was Luke Lynch who added his seventh goal of the seasons. This total leads RMU and is tied for third in all of college hockey. Ryley Rilsing also contributed by scoring his first goal of the season towards the tail end of the first period.

However, the key performer tonight for RMU was goaltender Francis Marotte. The sophomore goalie made 27 saves in order to seal the shutout for the Colonials. 14 of these saves came in the second period of play which helped RMU protect their lead which at the time was just two goals. He was pleased with his performance as well as those in front of him, but he was waiting to make a “clutch save,” and he feels that he made a few of those in the second period.

The first of the RMU goals came from solid offensive zone play. Graham was able to keep the puck in the zone at the point and then Louria found Dorowicz from the corner to give the Colonials the lead.

The next goal for the Colonials was scored by Risling. The freshman was the first to find the lose puck in the paint. He put it in the back of the net to increase the Colonials lead to 2-0.

The third and final goal was the result of a beautiful pass from Graham as he sent the puck across the goalmouth while falling to the ice. His pass landed on the tape of Lynch who buried the puck and the Crusaders with the Colonials final goal of the night.

One more positive for RMU was their penalty kill. They killed off all 4 of the Crusaders’ attempts. This has been one of the strongest parts of RMU’s game this season as they kill off over 80 percent of their penalties. Marotte attributes this success to the hard work and “good system” from the penalty killing unit.

Defensemen Alex Bontje cracked a wide grin when talking about the team’s first shut out of the 2017-18 campaign saying that it feels “very good.” Coach Schooley noted that the team did the “little things” correctly in Saturday’s victory.