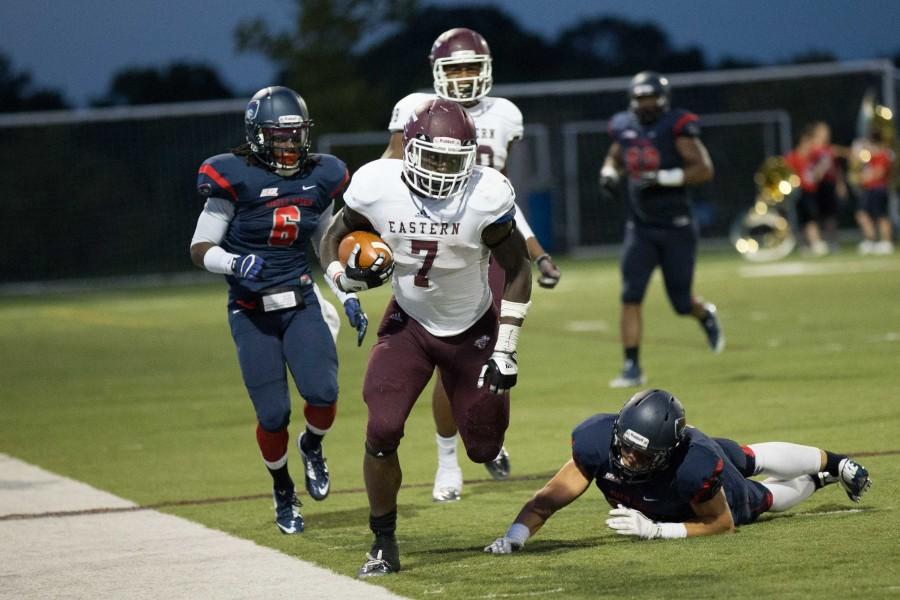 Junior defensive back David Taylor stated in practice this week that physicality would be a key to getting a win.

Although the Colonials couldn’t defeat Eastern Kentucky Thursday night, the defensive unit played with that physicality Taylor talked about, and showed a few positives that they can build off of down the road.

The game ended with the score 29-10, with EKU controlling the ball most of the game and gaining a good portion of their yardage on the ground, despite a respectable effort from the RMU defense.

The defense was led by sophomore linebacker Nic Lamica, who tallied 14 tackles and one interception near the goal line early in the first half and senior linebacker Mike Stojkovic, who finished with 13 total tackles.

“I don’t think the defense could have played any better,” Lamica said after the game.

They played a large part in four forced turnovers by the defense, two of which came from Taylor interceptions in his first start at the cornerback position.

Defensively, the unit showed great poise, never once losing their cool and keeping the game manageable and close when at times it seemed as though things were starting to get out of hand. They gave a full effort on every play, always swarming to the ball and working well together in all. This says a lot about a defense and a team that is relatively young at some positions.

“The biggest thing is that we’ve got to know what we’re supposed to do out there,” said defensive coordinator Scott Farison. “We got caught in some situations where you give them easy plays because we weren’t doing what we were supposed to do. It’s something that’s all correctable, which is a good thing moving forward.”

The game proved to be a learning experience as well, as Eastern Kentucky is a formidable opponent, playing a difficult schedule that includes some big name teams.

Robert Morris now begins a month-long road stretch, giving them plenty of time to get things in order before the start of conference play in October. Until then, the team must continue to work and keep improving as the weeks go by.

RMU starts its road trip next Saturday at the University of North Dakota, with kickoff coming at 7 P.M.