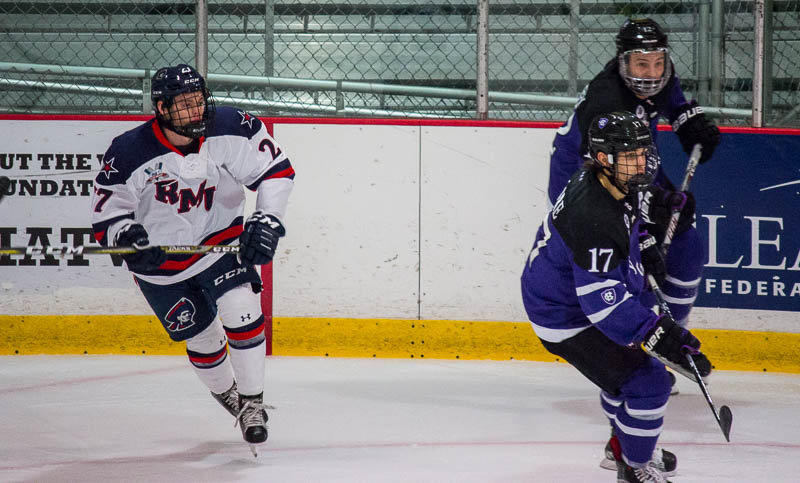 The Colonials struck first at 17:42 in the first period on a power-play goal by senior forward Brady Ferguson going top shelf just above the Holy Cross goalie’s glove, to make the score 1-0.

“Brady is a finesse player, away from the puck, hit holes, make plays. He’s not a nasty go to the physical areas. He will go there but that is not how Brady scores his goals,” said Head Coach Derek Schooley.

at the 13:56 mark of the opening period, Holy Cross scored to tied the game at 1-1. The goal was scored by Michael Laffin, assisted by Kevin Darrar and Jay Mackie.

The Crusaders took a the lead 2-1 in the second period when TJ Moore got a shot past RMU goaltender Francis Marotte.

With 10:23 left in the second period, Holy Cross’s Scott Pooley scored on a power play going top shelf with assists from Tommy Muratore and Spencer Trapp to give the Crusaders a two-goal lead.

Sophomore forward Matthew Graham cut the Crusaders lead down to one goal when he found the back of the net later in the second period, making the score 3-2 Holy Cross.

However, Holy Cross grabbed a two-goal lead once again, 4-2, when Frank Boie beat Marotte in net. The play was reviewed for two minutes before being confirmed as a goal.

Ferguson praised his team’s fight back in the game but said that they shouldn’t have had to fight back.

“We did a good job coming back but we should have never been in that position. That is the one good thing to take out of this game, that we came back when we were down two goals,” said Ferguson.

Sophomore forward Luke Lynch then scored his sixth goal of the season cutting the Crusaders lead to 4-3 at the 15:32 mark of the second period. Lynch was assisted by Daniel Mantenuto and Timmy Moore.

A few minutes later with time 16.8 second left in the middle frame, Alex Tonge tied the game 4-4 with his goal, going top shelf.

Sophomore defenseman Alex Robert scored the Colonials only third-period goal to give Robert Morris the lead, 5-4, his first goal of the season. Robert received the assist from teammate Spencer Dorowicz.

“It is exciting, great to get the monkey off the back. I forgot how to celebrate, it has been a couple of years and it felt very good,” said Robert about his third-period goal and first of the season.

With 2:25 left in regulation, Holy Cross tied the game at 5-5 when Michael Laffin got the puck past Marotte. The goal was under review before being confirmed a goal.

Neither team was able to score the go-ahead goal in the remainder of regulation, forcing a five minute overtime period. However, Both teams couldn’t find the back of the net forcing the game to end in a 5-5 tie.

The Colonials and Crusaders will play the second game of their weekend series tomorrow night, Nov. 4 at Colonials Arena at 7:05 pm.