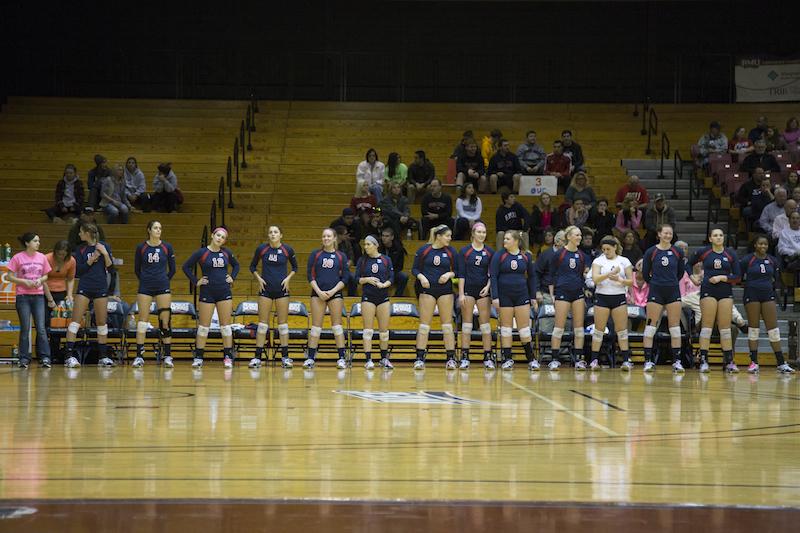 The Robert Morris women’s volleyball team heads into the final weekend of Northeast Conference play with title implications on the line. After defeating St. Francis College in three sets Saturday, the Colonials now face top-seed LIU Brooklyn for a share of the regular season crown.

“We want to put ourselves in position to be able to play one match to put it all on the line for a conference championship,” head coach Dale Starr said.

The Blackbirds are 12-0 in conference play this season, and have a 21-6 mark overall. They’ve dominated the NEC for the last several years and post a 46-game conference win streak.

“Luck, if they’re lucky, only runs so far,” said senior Becky Jay. “We have what it takes to beat them. We want to beat that team and stop this 40-odd game winning streak. We’re the only team that’s capable of beating them, I think they know that.”

Senior leadership from Jay and Erica Robb have transformed a perennial middle-of-the-road team into a confident group with a chance to win the Northeast Conference title this year.

Frankly, the Colonials have earned the right to be confident. They’ve won 12 of their last 13 matches, including four sweeps against conference opponents. They fell to LIU Brooklyn in four sets on Oct. 19th. Their last victory over the Blackbirds came in September of 2011.

The road to a conference championship runs through the LIU Brooklyn gym. The match begins on Sunday at 1 p.m.