Colonials battle the Terriers in a four-set win 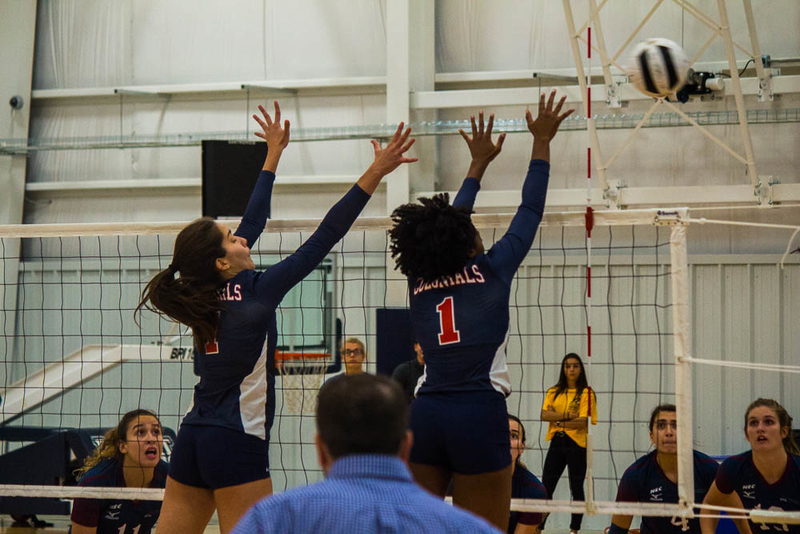 In the opening set of the match against the Saint Francis Brooklyn Terriers (7-17, NEC 1-8), a slow start was unheard of. Both teams started out with a momentum that was not to be stopped. And the drama was in no shortage.

Early in the first set, Coach Dale Starr was awarded his first yellow card of the season, after a misunderstanding between the up ref and the down ref. Starr was upset with the call that was made despite the fact that he had just asked for a rotation check, then being told that they were indeed in perfect rotation.

The team, however, wasn’t fazed. They instead took that power and used it to drive them forward to a 20-17 lead, forcing Saint Francis to call their first time out. Junior Taylor Lord seemed to be using the atmosphere to let it guide her own game, playing a dazzling first set.

“She’s been battling a shoulder injury, that actually happened last year, and I think it’s finally feeling better. And sometimes Taylor’s (Lord) her own worst enemy, so when she decides to get out of her own way she’s really really good. And I think she’s finally learning that lesson, and it’s nice to see from her,” Coach Dale Starr said.

The Terriers, nonetheless, were not going down without a fight, poking tiny inconspicuous holes in the Colonials defense. Robert Morris came back to adjust beautifully, claiming an early second set lead 11-7. RMU then capitalized on that lead continuing to lead 16-8, forcing SFU Brooklyn to call their second time out of the match.

Saint Francis just could not seem to find a way to adjust to the Colonials’ offense, constantly playing from behind. There seemed to be no way for the Terriers to make up the deficit they find themselves in. Leaving the Colonials to make giant strides to a three-set victory, winning the second set 25-14.

In what seemed would be the third and final set really showed that Saint Francis wasn’t to be counted out just yet, taking a quick 6-3 lead, showing that the true adjustment that RMU had left to make was the gaps in their block and hit coverage. This caused Coach Starr to take his first timeout of the match. Robert Morris grappled their way back from behind to come within two with a score of 16-17.

Ultimately coming back to tie with the Terriers’ 18, 19 and 20 before they finally overtook the lead, but the Colonials couldn’t seem to hold onto it, giving up their lead 23-21 in favor of Saint Francis. Saint Francis’ final match point was a joust until the very end, but in the final moments of the third set, the Terriers were the ones walking away with the set victory.

RMU in the fourth set didn’t give any signs that they wanted to play a fifth, taking a quick four-to-zero lead. Which they did not relinquish at any point, compelling SFU to call a timeout early in the fourth set. Robert Morris continued to take charge with Alyson Londot, Taylor Lord and Emma Granger all joining the kill party. Maria Alfano also joining in with some key defensive blocks, and a few kills of her own, truly coming alive in the fourth set and pressuring another timeout.

SFU tried to make one final rally, but alas could not pull it through, falling apart at the seams. The Colonials took full advantage and continued to make smart strategic decisions, showing that the team knows when to really swing, and when to take a little off to keep the defense on their toes. In the end, winning on a matching-winning ace from freshman Emma Granger.

“They lost a little bit of focus (RMU). They (SFU) had been beaten pretty bad in the first two sets, so they changed things around what they were doing, and they played a little bit harder and they made some plays,” Coach Dale Starr said.

“We got beat up this weekend, we lost three players yesterday, we’ll have to see how long they’re going to be out, and see how well they’re going to come back, and go from there,” Coach Starr said.

In yesterday’s match against LIU Brooklyn, freshman Mirna Sarjanovic took a nasty ankle injury, along with two of her fellow teammates.

“We got better defensively this weekend, which was our goal last week, our offense is better today then it was yesterday. But it’s finetuned thing for these kids, they’re so young. It’s like we fix one thing and two other things go down grain, and so we have to fix those things,” Coach Starr said.

The Colonials are on the road this coming weekend, first at Sacred Heart on Friday, Oct. 27 at 6 p.m. and then Fairleigh Dickinson on Saturday, Oct. 29 at 4 p.m.

“We can’t take anything for granted and we gotta go in with the mentality that we have to win two in order to continue and to keep our turn,” Coach Starr said.