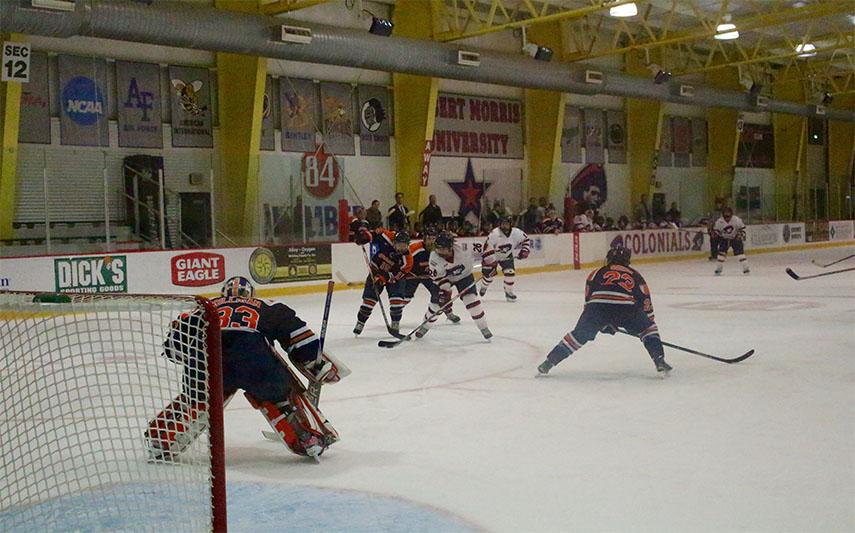 On the eve of Halloween, the sticks in 84 Lumber Arena appeared to take the role of a mummy, with the tape around the blade acting as the gauze. The Colonials women’s hockey team (4-4-1) struggled for a while to get much lift on the puck, and were failing to clear the zone at times in a 4-3 overtime loss to the Syracuse Orange (4-4-0).

“It’s tough because, you know, Syracuse did a good job of picking pucks off the boards,” said goaltender Jessica Dodds. “So every time we threw it up the boards, they were really good, their defensemen pinched quite a bit. So I think, just tomorrow, we can bring in, maybe throwing the pucks off the glass a bit more instead of going cross-ice.”

Not to use another halloween pun, the first period was mostly dead. The excitement mostly came around the seventh minute, when the puck got dumped into the right corner by the Colonials. It was retrieved by Rikki Meilleur, who swung it out to Ashley Vesci. Surrounded in the corner, she rifled the pass to Amanda Pantaleo standing alone near the center of the home-plate area. Jenn Gilligan fell to the ice, and the shot went a little wide where Vesci was recovering toward the net and tipped it past the fallen opponent.

The first period ended with the Colonials leading 1-0 with little excitement aside from a little scare for the Orange. With a powerplay in the waning minutes, the Orange attacked and gained a 5-on-2 opportunity.

They failed to make an impact, however, and the excitement was paused when amongst a scrum Nicole Renault of the Orange came rushing out to the bench holding her throat as if choking. She would leave on her own, seemingly doing better, but had a momentary scare, and not the kind you like this time of year.

Syracuse broke the tie early on, a turnover in the neutral zone — a common theme throughout this game — gave them a 2-on-1 opportunity. Maggie Lague was the lone defender, and she admirably challenged with a dive while the backcheck targeted the puck carrier. A shot by Allie Munroe of Syracuse was saved with the blocker, but the rebound went to Alysha Burriss. She buried it for her third of the season.

“It definitely makes me more concentrated on, you know, finding the loose pucks,” said Dodds. “I think a couple of those are rebound goals, I know we had a couple bad bounces on plays, but you know. Just being more aware of the puck out on the ice and try to track it a little bit better.”

It didn’t take long for a response, however. Vesci broke off the bench a few moments later, receiving a breakout pass from Sarah Quaranta along the blueline. On the breakaway, she drove to the net, gave a nifty wrist flick to Gilligan dive, and went to her backhand to stuff it behind for a goal.

“Honestly, I just kind of blacked out and hoped for the best,” said Vesci. “You try not to think too much in situations like that. I just sort of went with my gut instinct.”

It took another four minutes, almost exactly, before the next goal came on the board. With another neutral zone turnover, the Colonials found themselves falling back on defense. Burriss, the previous goal scorer, carried the puck in on the left side with a 2-on-2. She cut toward the middle, fired a shot that floated up and seemed to target Dodds’s mask. Dodds reached above, ducked down a bit. As she would later explain, the puck hit her glove and fell in.

“It’s actually kind of fun, like, being hit in the head a little bit,” said Dodds in what sounds like an obvious example of the saying, goalies are a little strange. “I mean, in practice it happens so much that I’m so used to it. It doesn’t even hurt. What happened on that one, the kid took the shot and when I went to grab it, it actually hit the top of my glove and pushed down. Because when I got up, I looked and I thought I had it, because I was in the right position, but as it turns out, the glove had been pushed down when the shot came. It was literally inches. And in a game like tonight, inches made the difference for the other team.”

Vesci would find some more excitement later in the game, seeming to be the driving force of the action for the Colonials in this contest. She garnered another breakaway, but was caught up to and tripped without a call. The referees missed a few checks and trips throughout the evening, everyone makes mistakes.

The second period ended with a 2-2 tie, with the goals being scored by number 22 for RMU and number 20 for Syracuse. So many twos in one sentences, this is the kind of coincidence a writer lives for.

Just a few minutes into the third period, Syracuse was back on the board with another unassisted goal. While they had control of the puck in their offensive zone, it was yet another turnover by the Colonials, this time by the blue line. Dakota Derrer cut to the middle, and with what could only be assumed as witchcraft and magical vision, found a slight opening in traffic and rifled the shot by Dodds’s blocker to break the tie.

Through the remainder of the period, the Orange seemed to maintain control. They would end with 11 shots in the period to the Colonials’s 4. It wasn’t until the final five minutes that RMU seemed to mount a comeback.

Like their first goal, they sent the puck flying in past the defense and were able to retrieve it. Maeve Garvey got the puck from Mackenzie Johnston, and tapped it off the boards to Mikaela Lowater. Lowater didn’t hesitate. Jessica Gazzola got in front of the net as the one-timer flew in, reached her stick out, but failed to make contact, only paralyzing Gilligan with nervousness. The puck flew in and the game was tied once more.

Vesci again came to take control slightly later, and carried the puck end-to-end before rifling a shot that beat Gilligan, but ricocheted off the crossbar. Instead, this game would go to overtime tied 3-3.

Overtime was an awkward affair. Syracuse maintained possession for the entire minute and two seconds it lasted, attempting three shots. The one that landed was from Jessica Sibley, on the right side. She shot, and the light came on suddenly.

“Honestly, we think we should’ve won that game,” said Vesci. “That’s a bad bounce at the end there. We’re glad, we’re happy we came out. We definitely showed them that we’re not a last place team. And tomorrow, we’re going to come out with a win.”

Dodds would later explain it bounced off Maggie Lague in front. It was a sudden moment for a game filled with jump scares, to return to the halloween puns.

“Those bounces happen,” said Dodds. “You know, you can’t be mad at your defensemen. With how many goals they save for me, I think I can allow one in their defense. It was just a bad bounce, but that’s the way it goes, that’s hockey.”

The Colonials are back in action at 84 Lumber Arena against Syracuse on Saturday afternoon at 3 p.m.