Colonials blow away Knights in bounce back win 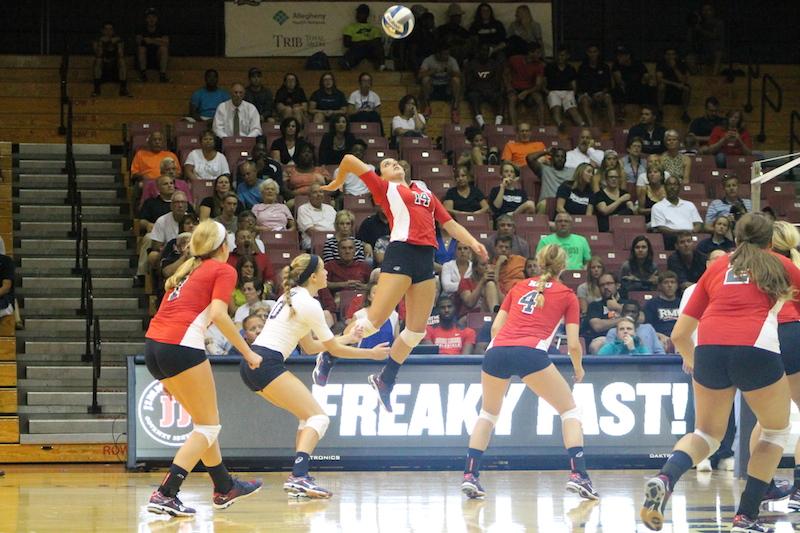 This weekend’s home series was a tale of two teams for the Robert Morris Volleyball team as the Colonials bounced back from a poor showing on Saturday against Sacred Heart to beat the Fairleigh Dickinson Knights 3 sets to 0.

Overall, the team put on one of its best performances of the season with double digit points scored by Kristin Thompson, Arden Fisher, Leah Dunivan and Taylor Lord.

Dunivan consistently led the surge for the Colonials. She came out with 12 points in today’s match, which included strong defense at the net with 6 assisted blocks and 8 kills that came with a .476 hitting percentage, the day’s best for RMU.

After 24 errors in the previous match, the Colonials limited the mistakes to 13 errors. Robert Morris only trailed once in the match when it was 1-0 in the first set. From there on out it was pure domination as they went on to win 3 straight sets: 25-15, 25-14, and 25-20.

“We had a good game plan and we knew where they were vulnerable,” said coach Dale Starr. “We were in system all day long…and when we are in system we are tough to stop.”

When asked about how the team was able to make such a quick turnaround Starr responded with the team’s great focus. “The kids were able to refocus and put yesterday in the rear view mirror and have a really good match today”

“He gets us to focus before the game,” said Dunivan. “And when the rest of your team plays like we did today that makes it easy.”

It certainly is easy when one has players like Fisher and Thompson on the court. The duo combined for 20 kills and 21 digs to go alongside Dunivan’s performance.

“Kristin (Thompson) and Arden (Fisher) always play at a high level and are very consistent. They get up for the ball and I don’t even know how they do it,” said Dunivan.

If Robert Morris continues to play like they did today, they will be a force to be reckoned with throughout the long conference season. The Colonials now sit at 4-1 in conference this season as they head on the road next weekend to play Bryant and Central Connecticut State with the main focus on beating a very tough Bryant Team.

RMU knows they have the ability to control their own destiny in the conference as long as they can keep the passing game strong and set up players like Fisher and Thompson to do what they do best.