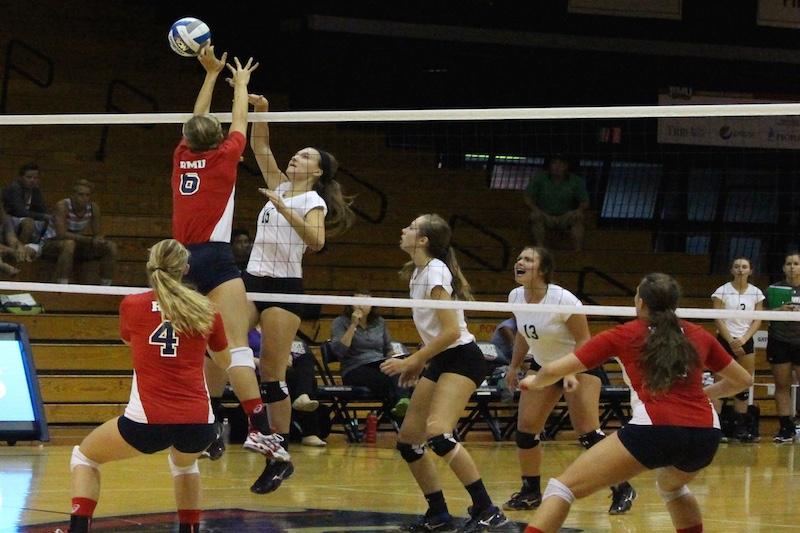 The Robert Morris Colonials picked up their second win of the season and on the day in a 3-1 victory against the Loyola Greyhounds in the final match of the Robert Morris Invitational.

The Colonials took the first two sets before finally defeating the Greyhounds in the fourth and final set.

The match saw many ups and downs for Robert Morris as many early errors left Loyola up 7-4 early in the first set. It was the early play of Arden Fisher, with nine kills in the first set, that kept RMU close to the Greyhounds until the Colonials eventually pulled away to win the first set, 25-21.

However, it was very evident that head coach Dale Starr was frustrated by the mistakes which kept Loyola close in every set.

“It’s hard when you have four freshman on the floor,” said Starr. “We expected it. I tend to wear my emotions pretty outwardly.”

Starr’s emotions hit a peak during the second set where the Colonials squeaked by, 25-23, before going into the locker room.

Maintaining high energy through each point, even with the mistakes, Robert Morris managed to pull out the points that really mattered, even with star senior Kristin Thompson on the bench with an injury.

“She really wants to be out there,” said Starr. “But she knows these preseason games don’t get us into the NCAA tournament….we have to get her ready for when the games really matter.”

They will keep a close eye on Thompson and only play her when she feels able.

The Colonials, however, had another player step up Saturday. Her name is Arden Fisher, a junior outside hitter for RMU. She finished with a double-double in both games with 21 kills and 14 digs in the second half of the doubleheader.

Fisher was key in keeping the energy high as a constant voice, leading both by her words and actions on the court and on the sideline.

“It’s a mentality,” said Fisher. “You just have to be able to bounce back when things don’t go your way.”

Fisher, very modest about her success, says it all comes from her teammates. “When we have other good passers who can put the ball up, it makes it easy,” Fisher said.

Hopefully this dominant early performance suggests great things for the rest of the season.

While almost blowing a ten-point lead in the fourth set, the Colonials found their bearings and finished off the Greyhounds, 25-20.

The Colonials are now 2-1 on the season, winning two-in-a-row after a season opening loss to UMBC. It appears as though the early nerves from the six freshman on the squad have already begun to wear off. Which only suggests good things for a team that has so much potential going forward.

Robert Morris will play another home game this Tuesday against Duquesne at the Sewall Center at 7 pm before the Colonials hit the road for the next month of non-conference competition.