Colonials bounce back in overtime to defeat St. Lawrence Saints 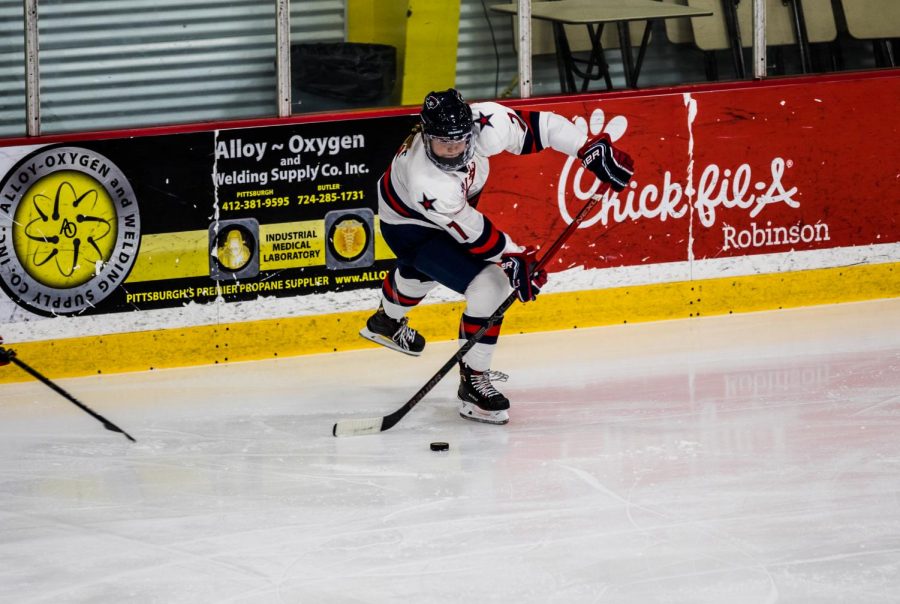 Pittsburgh, Pa. — On Saturday, the Colonials (1-1) wrapped up their first non-conference weekend series with the St. Lawrence Saints (1-1) with a 3-2 victory in overtime. The Colonials had dropped the first game to the Saints by a score of 2-0 the night before. This time the Colonials had other plans.

The game started off fast as Colonials goaltender, senior Lauren Bailey, was quick to answer the call to a few early opportunities. Despite having eight shots in the first period, and two power plays with one of them being a five-on-three, the Colonials couldn’t find the net as the teams went into the first intermission tied at zero.

The second period got off to a very different start as the Saints struck quickly. A bouncing puck and a quick jump from senior forward Justine Reyes put the Saints up 1-0 after a rising shot past Bailey at 2:20 in the second. Though it seemed like deja vu from the night prior, the Colonials pressed on and swiftly tied the game when freshman forward Mackenzie Krasowski scored her first collegiate goal to tie the game at 2:54 in the second.

“It’s just kind of a relief,” said Krasowski. “I’ve been here for like a month now and all I’ve been waiting for is to get my chance and I finally did and was able to put one on the board. It feels so nice.”

The scoring parade would continue as the Saints wouldn’t go away quietly. It would be Reyes again scoring her second goal of the afternoon sliding the puck past Bailey on the power play to put the Saints back on top at 6:52 into the second period.

It would only take around four minutes for the Colonials to answer right back as sophomore defenseman Emily Curlett rifled a shot from the point that ricocheted off the post and in through a screen of Saints and Colonials at 12:05 in the second period. Robert Morris was given a chance on the power play nearing the end of the second period, no goals yielded from it and the teams headed into the locker room knotted at two apiece.

The third period was the most open the game got. Both teams came out flying and kept producing chance after chance at each end of the ice. There was a feeling the next goal would potentially be the backbreaker and both teams seemed to pick up on that as their defenses started to close in more on scoring for both sides. Blocking shots became second nature as the Colonials racked up six blocks in the third period.

A late penalty was assessed to senior defenseman Kirsten Welsh for body-checking at 12:41 in the third. The Colonials were able to bear down and got the job done on the penalty kill to keep the score even. Overtime was imminent at that point with neither team budging defensively.

The overtime period started exactly like the third, fast and physical. Though this time it would only take 2:51 for a result. After taking a late penalty in the third, Welsh made up for her previous fall by putting the game-winner on a howitzer from the point that deflected off a Saint and behind St. Lawrence senior goaltender Sonjia Shelly. Colonials goaltender Bailey and junior forward Jaycee Gebhard assisted on the game-winner, and the Colonials left home with a win against a very tough opponent.

“Coming off yesterday’s game obviously you’re bouncing back. We felt like we got more shots on goal,” said Robert Morris head coach Paul Colontino as his Colonials outshot their opponent 21-19. “(St. Lawrence) did a nice job in the offensive zone down low taking away lanes to the net.”

Though the scoring wasn’t there in the first, some other counterparts of the team were able to open up the ice more for the scoring threats as the game progressed.

“They tried to take away our scoring threats and they did a very good job with it. I think the rest of our lines picked up the slack a little bit and we were able to cycle … and kick it to the point,” said Colontino.

The Colonials will face off against No. 3 Clarkson next week on Friday and Saturday in another weekend series.