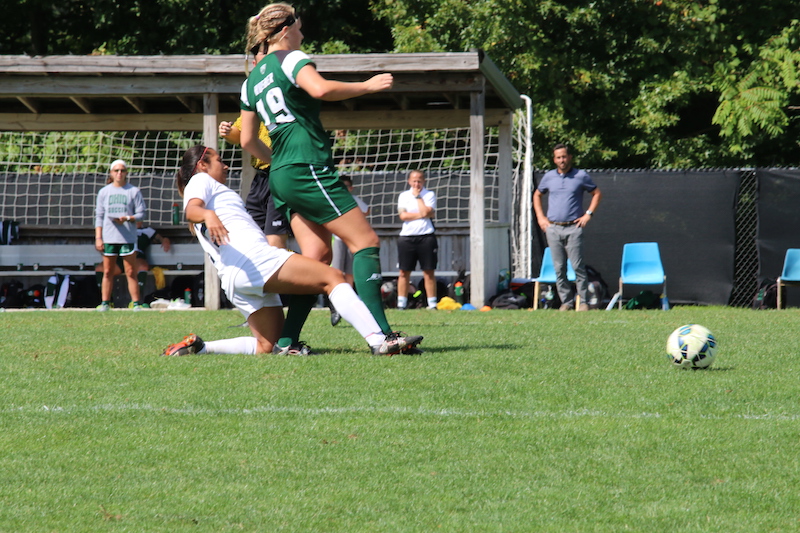 The Colonials captured their first win of the season in out-of conference play against the Ohio Bobcats.

“We are working on possession as our game,” said Colonials head coach John Kowalski. “We play it out of the back and through midfield, that’s kind of our style of play.”

The Colonials were able to hold the Bobcats to only two shots on goal as they went into the half tied at zero.

As the whistle sounded to start the second half, you could see a change in the style of play. Both sides became more physical as their hunger to score increased.

The game increased physicality early in the 49th minute when Ohio defender Celeste Fushimi-Karns received a yellow card. Then, less than a minute later, Robert Morris University’s own Kayla Kelley had to come out of the game after being injured. By the 55th minute things still hadn’t settled down and Colonial Kasia Bak was yellow carded.

The physical play continued throughout the second half as the Bobcats outshot the Colonials 8-5. The game remained scoreless though the end of regulation, forcing overtime.

Overtime is played with a “Golden Goal” rule meaning whoever scores first within the ten minute period will win the match.

Both teams came out pressing to score in the overtime period knowing that it would only take one goal. The Colonials were able to put a shot on goal right from the start getting the game winning goal in the 92nd minute.

Kasia Bak caught Bobcat goal keeper Erin Beurket too far off of her line as she maneuvered around her before placing her shot in the back of an empty net. Bak’s goal sealed the Colonials first win of the season.

“We’ve been working really hard and we’ve been having a lot of losses lately so it was nice just to put one in the back of the net,” said Bak.

The Colonials will play again this Thursday when they host Howard.