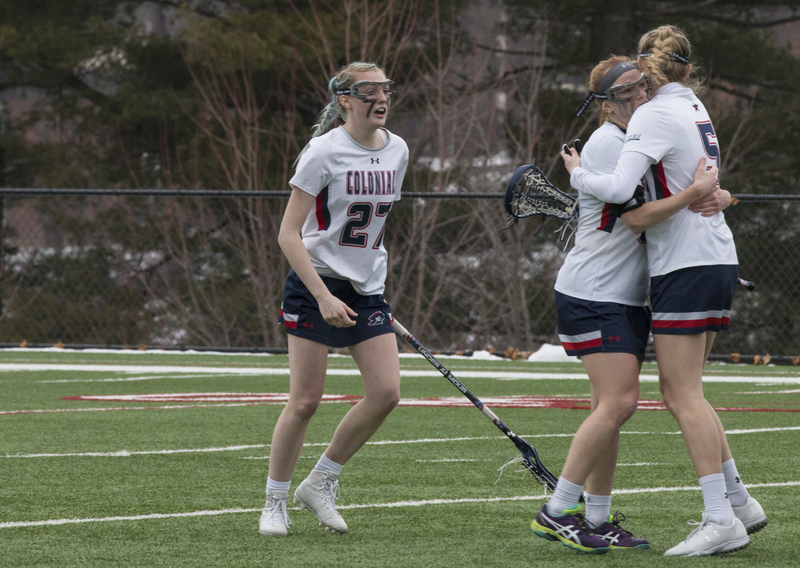 The Robert Morris University Colonials women’s lacrosse team had a short weekend as they hosted the Louisville Cardinals Saturday afternoon. The Colonials were able to keep their winning ways in tact, and with an intense score of 13-12.

In the first half of the game, the Colonials put their names on the board first when midfielder Dana Davis scored her ninth goal of the season at 28:29 to make it 1-0 Colonials.

Minutes later, Cardinals midfielder Ally Hall scored on Colonial goalie Katelynn Miller to tie the game at one apiece. From then on, the scoring was back and forth. Colonial attacker Kerri Sayrafe stole the lead to make it 2-1 with her seventh of the season, and followed behind was Cardinal attacker Tessa Chad to once again tie up the game at two. It was once again the Colonials to clear the tie as midfielder Melanie Gandy made it 3-2 Colonials, assisted by Niki Grillon. To keep the ball rolling, Colonial attacker Clio Kerr scored to advance the score of 4-2.

Halfway through the first, Cardinal midfielder Caroline Blalock put the ball past the Colonial net-minder to make it 4-3. Colonial midfielder Davis scored her 10th of the season with 14:09 left in the period to make it 5-3. Seconds later, Cardinals attacker Tessa Chad and midfielder Lexi Cheetham scored seconds after each other to advance the score to 5-4 and then tie the game 5-5. Colonials stole the lead at 10:01 left with a goal scored by Kelley Flynn, her sixth of the season and assisted by Niki Grillon, to make it 6-5.

Towards the end of the first half, Cardinals tied the score from midfielder Blalock to make it 6-6. 2:03 remaining, Colonial attacker Shannon Lynch stole the lead as she netted her eighth goal of the season to make it 7-6, assisted by Dana Davis.

The second half of the game was scoring from both teams. Opening the period, Colonials continued to steal the lead as Lynch makes it 8-6 with her ninth of the season. Chasing after the lead was Cardinals’ Chad who made it 8-7. Colonials and Cardinals liked playing tag, because then Colonial midfielder Sophia Eureka scored her 11th of the season and made it 9-7.

Halfway through the second, Cardinal Blalock was continuing to steal the show as she scored on Colonial goalie Miller to make it 9-8 with 17 minutes left. Colonials had a scoring streak going on as Davis scored twice, Sayrafe and Crouse followed her lead to steal the lead and make it 13-8. The Cardinals picked up on the Colonials’ scoring fever as attacker Tessa Chad scored to make it 13-9 and Caroline Blalock ended the game by scoring three more goals to make it 13-12. Despite the Cardinals’ non-stop scoring, they couldn’t get more goals past Colonial net-minder Katelyn Miller and the Colonials won 13-12.

The Colonials didn’t play any games since last Sunday, and head coach Katrina Silva noticed a difference in her players.

“I think we played with a lot more poise,” said Silva. “We played at a much faster speed. I think everyone contributed. All the cliches you talk about sports where everyone needs to do their little bitty part to make the team go and you really saw it today. We had a lot of players in different spots and people made adjustments and kept playing.”

Goaltender Katelynn Miller had a solid game, and she attributes her success in Saturday’s game to her defense.

With playing well comes great goal-scoring, and Dana Davis scored four goals in Saturday’s game and netted 12 goals this far, and Kerri Sayrafe and Shannon Lynch picked up their scoring from last season as well.

“Honestly, we wouldn’t be where we are and I wouldn’t be the player I am without my team and the people I surround myself with,” says Davis. “I wouldn’t want to be on any other team. This team and coaching staff are an amazing group of women, and it’s awesome to play with them. We each have each other’s backs on and off the field, and I couldn’t ask for anything more than that; it’s an awesome team to be on.”

The Colonials are away this Wednesday as they travel to Columbus, Ohio, to face the Ohio State Buckeyes. Game time is at 4 p.m.