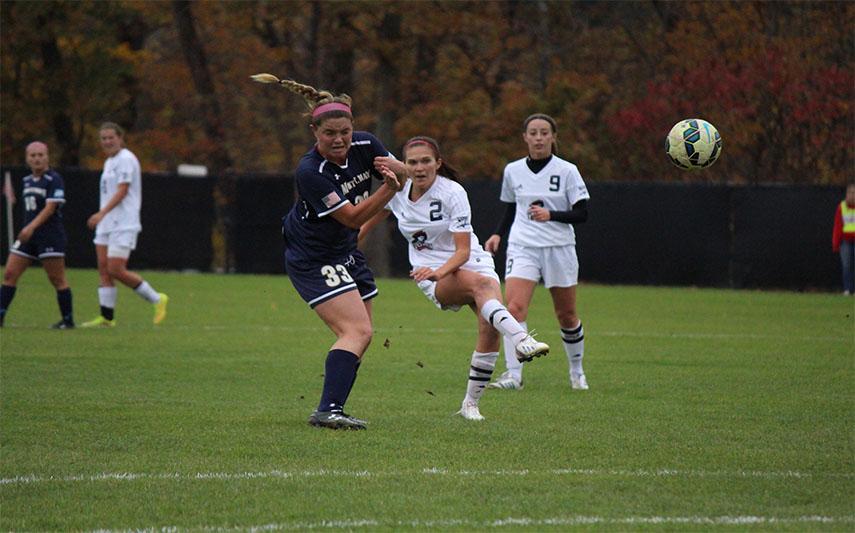 Friday afternoon served as a great time for Colonial soccer as both the men’s and women’s programs punched tickets to the NEC Tournament. The Robert Morris women (9-9-0, 5-2-0) clinched their first playoff bid in team history with a 3-0 win over Mount St. Mary’s.

Senior goalkeeper Chelsea de Jager was aware of the situation as she tweeted out before the game, “HEY COLONIALS. If #RMUWS wins today at 2:30 we make it to playoffs for the first time in program history. #ExperienceTheMagic #DoItForMomma.”

The Colonials marked their first goal in the 35th minute with a long Hanna Seybold pass that led to a remarkable header from sophomore Gabrielle Corrente (3rd of the season) that landed in the back-left corner of the net.

Robert Morris was held in check the remainder of the first half but continued its aggressive play which led to another header for the score in the 60th minute, this time coming from junior Erin Ritzer.

The Colonial offense was not done, however, as redshirt senior Casey Raymond found the goalkeeper on the ground and checked it off to senior Lauren Sulkowski who finished off the third RMU goal of the match.

Robert Morris head coach John Kowalski was ecstatic with the outcome of the contest and deservedly so. Kowalski was asked to describe his feelings after the ticket-punching game. “I am looking to my right and to my left and there are some men’s soccer tournament banners over here and we talked with the women, looking at those banners, (saying) we want to have one of those for ourselves.”

The Colonials currently sit at second place in the NEC with the win over the Mountaineers. Tied for third are Bryant, who beat RMU in a gut-wrenching 1-0 game earlier in the season, and Sacred Heart, who lost at home to Robert Morris by a score of 3-2 on Oct. 18. Fairleigh Dickinson, who is the Colonials’ last opponent of the season, sits at first place and is undefeated in conference play.

RMU not only made the playoffs with the win, but they bumped up their record to 9-9. This signifies the unit has a chance of completing the season better than .500, something they have not done since 2011.

The leading player for the Colonials was Sulkowski who finished with 6 shots (3 on goal), one goal, and one assist. Emma Blair completed most of the work on offense for Mount St. Mary’s with three shots (2 on goal).

De Jager did not see much action as Robert Morris did a great job of keeping the ball in enemy territory. The Mountaineers only registered seven shots (4 on goal), while RMU finished with 20 shots with an impressive 13 shots on goal.

The Colonials will play their final regular season game at home on Sunday, Nov. 1 at 11 a.m. against the aforementioned Fairleigh Dickinson Knights. This could be a preview for an NEC Tournament Final.