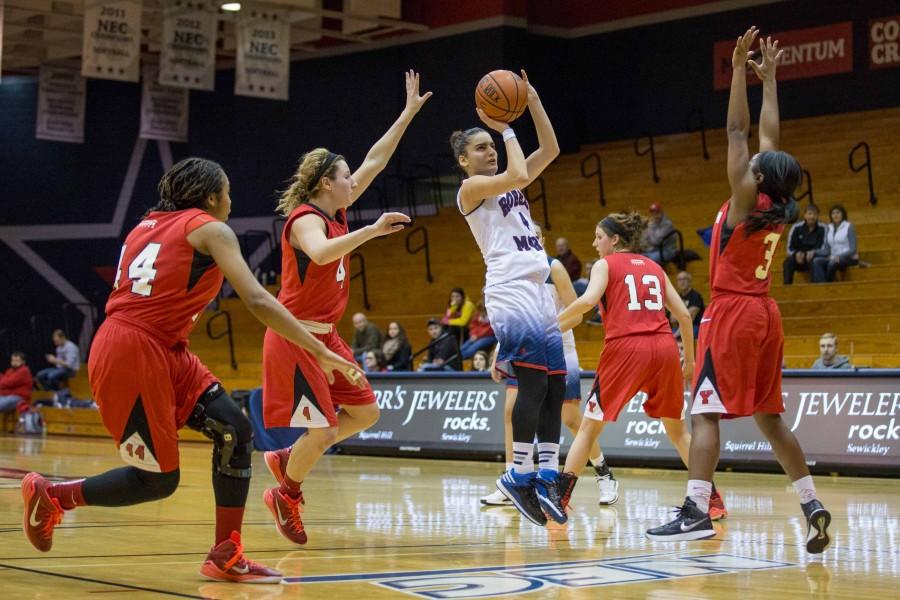 In a game that was eerily similar to their 70-65 overtime loss to Xavier on Nov. 30, the Colonials came out firing. A 12-0 run gave RMU a momentum boost that it rode to a 33-20 halftime lead, despite foul troubles by recent standout Judith Sole.

The sophomore entered the game having scored 41 points and grabbing 27 rebounds in her last two contests, only to see her foul out of this one with just five points and seven boards.

Ready to step up was freshman Megan Smith, who reentered the lineup after missing several games due to injury. She chipped in with eight points and three rebounds, on par with her season averages of 8.5 points and 4.3 rebounds per game.

“Physically I felt good. I was ready, I worked hard in practice and was ready to get back,” Smith said.

The second half saw the Colonials, as a whole, dip into foul trouble, with five different players picking up at least four fouls. This led to the Penguins connecting on a superb 33 of their 35 free throw attempts.

YSU spent the last 18 minutes of regulation and overtime in the double bonus.

“I think a lot of the foul calls we had were frustration fouls. We got to be smarter; we turn the ball over or they get a rebound and we reach in after the ball or a foul over the back late,” said Associate head coach Charlie Buscaglia. “I think those fouls were the ones adding up and really affected us down the stretch.”

Leading the charge for the Colonials was sophomore shooting guard Anna Nikki Stamolamprou, who was one rebound short of a double-double with 16 points and nine boards.

“We knew it was our last home game before the conference games start, so we just came today to work hard, put some pressure on, and get the first home win,” said Stamolamprou.

Robert Morris had an opportunity to win the game with a buzzer beater, as Stamolamprou’s Hail Mary attempt from the corner landed in the hands of senior Lou Mataly, who missed a layup as time expired.

“I was supposed to get the ball to the wing and play one on one. I just made a read. I went the corner and not the wing, I didn’t catch the ball, and it was all my fault,” said Stamolamprou.

The Penguins outscored the Colonials 12-4 in overtime to remain in the ranks of the unbeaten.

Youngstown State was led by a duo of double-doubles, with seniors Heidi Schlegel scoring 22 points and nabbing 11 rebounds and Latisha Walker going for 14 points and 12 rebounds.

The Colonials hit the road for their next matchup to take on Cornell on Dec. 20. Their next home contest is Jan. 3, a conference matchup against Mount St. Mary’s.

“We have talent, we’re just really young,” Buscaglia said. “We have players that want to win, but we’re teaching them what it takes to win.”