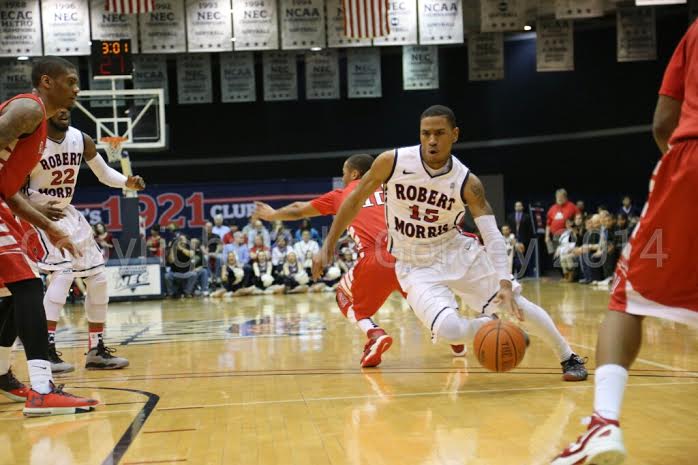 After Karvel Anderson drained his first shot from beyond the arc in the opening minute of RMU’s first round National Invitation Tournament matchup against St. John’s, a gaping grin flashed across the face of the 6-foot-2 guard.

Perhaps Anderson was simply ecstatic to give his team an early 5-0 advantage.

Perhaps he knew all along that his three point shooting would carry the Colonials to victory over a No. 1 seed.

Or perhaps the senior was just enjoying the post-season atmosphere.

Regardless, even though it wasn’t the NCAA Tournament, Anderson and company had a ball.

“Ant [Myers-Pate] and I didn’t want this to be our last game,” said Anderson, who shot 60% from downtown. “Our mindset was to win at all costs.”

Since RMU lacked the height advantage that their Big East counterpart possessed, the Colonials relied on their accurate three point shooting to take a 49-27 advantage at halftime.

However Robert Morris, whose bench only consisted of three players, was forced to play short-handed for the duration of the final frame after junior Dave Appolon suffered a foot injury during the first half.

Leading by 22 with 7:07 remaining, the Colonials began to assume that victory was imminent and, as a result, a few miscues on defense enabled SJU to use an 18-4 run to cut the deficit to eight with 2:53 left.

However St John’s comeback was too little, too late after Anderson went 5-6 from the charity stripe over the final minute to seal the victory and punch Robert Morris’ ticket to the second round to face Belmont.

“A terrific performance by our entire team. Our guys wanted to erase the disappointment of losing the NEC Championship game,” head coach Andy Toole said after the game. “We might not be where we want to be, but tonight was an opportunity to show off our program on a national stage.”