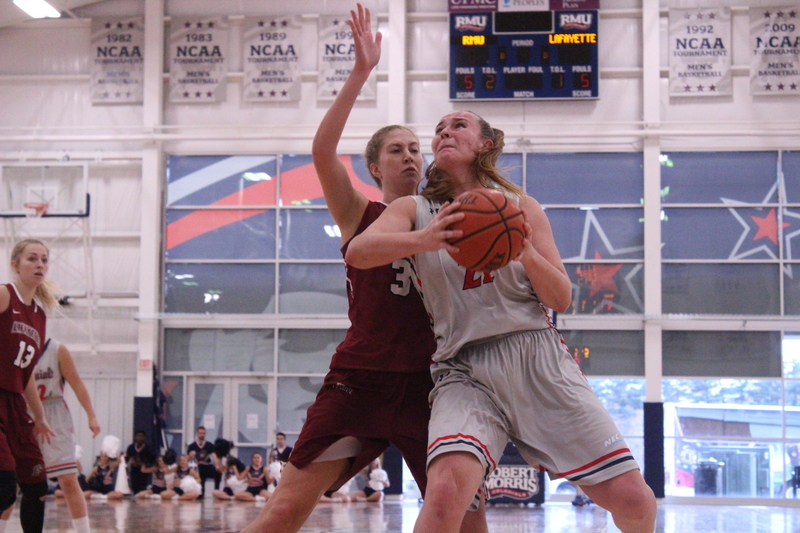 The Robert Morris Colonials continued their shutdown defense and overpowering fourth-quarter play in a 63-42 victory over the Lafayette Leopards on Saturday afternoon.

Stout defense and low-percentage shooting dominated the game through the first half, and while Robert Morris held the lead for most of the first half, Layfayette never stayed too far away.

The Leopards fell behind 12-5 early in the first quarter but clawed their way back to just a 15-11 deficit at the end of the quarter.

The second quarter continued the defensive trend as the shooting percentages dropped even lower, as both teams continued to be even in almost every statistical category.

While the Colonials continued to display why they have one of the best defenses in the nation, their offense was uncharacteristically sluggish.

“We haven’t faced a lot of zone (defense) this year, so just trying to stay in our zone offense. I think Lafayette knew that our mover offense is very hard to guard so they decided to go zone,” said senior forward Megan Smith.

“They were doing a good job of crashing in for the rebound,” said RMU head coach Charlie Buscaglia. “They were outworking us, getting to the basket and cleaning up misses.”

But come the second half, the offense came out with a purpose, specifically from senior forward Jocelynne Jones, who finally put herself on the scoreboard with two early threes to swing the momentum in favor of Robert Morris.

The Colonials had finally found their stroke. And while the Leopards tried to respond, Robert Morris’ physical presence on defense made it difficult to keep up with their fervent scoring pace.

Freshman guard Nina Augustin added a three of her own while Nneka Ezeigbo saw herself continuing to earn shots at the charity stripe.

Ezeigbo would finish with a team-leading 12 points and nine rebounds on the afternoon.

Robert Morris had complete control of the floor, scoring at will from both inside and outside the paint, putting up 21 of their 63 points in the third quarter. Those 21 points came from six different players.

And from there, the game belonged to Robert Morris.

The Colonials outscored Lafayette, 16-6 in the fourth quarter to put an exclamation point on their completely dominant second half.

The fourth quarter has consistently been RMU’s best and an important reason the team is now on a four-game winning streak.

“We always say this is the fourth quarter, we gotta grind it out, we gotta go in full force like there are 10 minutes left, anything can happen,” said Smith. “We just realize that if we’re up that’s great, but we gotta stay up.”

The win today for the Colonials puts their record at 6-3 with just two games left in conference play.

Robert Morris hopes to carry their momentum into conference play as they currently boast one of the best non-conference records in the NEC.