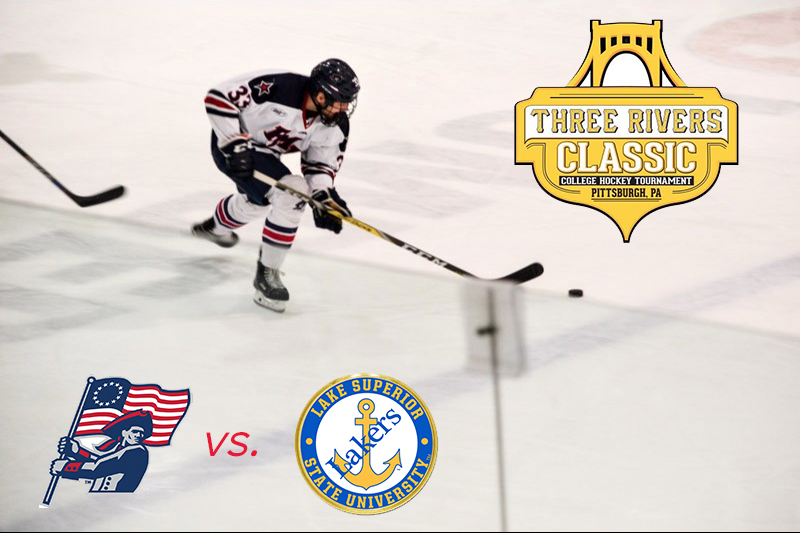 The Robert Morris University men’s hockey team cruised out of the first game of the Three Rivers Classic with a 5-0 win over Lake Superior State Friday night at PPG Paints Arena.

Robert Morris collectively scored three goals in the first period to start the onslaught that would carry into the second period. Senior defenseman Timmy Moore broke the tie early in the first period with just inches between his skates and the goal crease to put his team up on the scoreboard. Brady Ferguson and Sean Giles were the two Colonials credited with the assists on the goal.

The Colonials continued to play well down low in the offensive zone with all five of the goals that Robert Morris scored coming from the low slot just in front of Lake Superior’s goaltenders. The Colonials moved the puck very well at the point and meticulously passed it from half-boards to the point until they snuck into the slot and scored.

After another five minutes elapsed, Ferguson scored his 11th goal of the season unassisted, falling to his back after putting the puck past Mitens.

In the first period alone, the Colonials put 17 shots on goal and attempted 33 shots. While on the other side of the ice, the Lakers only surmounted a minimal three shots against sophomore goaltender Francis Marrotte, who faced a total of 19 shots all night. This is the same amount of shots that Lake Superior States second goaltender Nick Kossoff faced in his forty minutes between the pipes.

Marrotte’s brick wall performance allowed his forwards to transition quickly down the ice and capitalize on every opportunity that arose for them, with his sixth shutout performance being an added bonus for Marrotte.

The Colonials jumped back into attack mode as soon as the second period started with freshman defenseman Nick Jenny scoring his first career NCAA goal with the help of Daniel Mantenuto and Robert Powers, making it 4-0.

Pittsburgh native Luke Lynch decide he needed to conclude the scoring for the game by netting his 12th goal of the season on the power play, with both Matthew Graham and Spencer Dorowicz getting assists on the goal.

The only weak thing in the RMU play Friday night was their power play lines. The power play went 1-7 on the night with twelve shots coming on the man advantage, with Lynch’s goal being the only on the find the back of the net. This minor setback didn’t affect the outcome of the game as it usually would.

Another major factor that pushed the Colonials to victory was their aggressive style of play. They punished the puck carrier and used these turnover to quickly turn to the attack. Then, when on the attack, they weren’t afraid to go down low and work hard behind the net to move the puck back up to the point to prepare for another scoring opportunity.

When on the defensive side of the ice, they put themselves in the shooting lanes to limit the number of shots that Marrotte faced. They made the Lakers afraid of working the puck around and holding on to it for too long.

Robert Morris then moved the puck very quickly and efficiently to open up one man in the slot to get the best opportunities. They did this from the moment the puck dropped. They executed the puck so well that they were able to score from almost the same spot every time. With the aggressive and physical play to the passing and the outstanding work from Marrotte between the pipes, it was a recipe for success.

Coach Derek Schooley said, “We believe in ourselves and we believe in each other.” Belief has become the new motto for the Colonials in the past month.

“That was a welcome to Pittsburgh,” said Schooley, “Nothing against Lake (Superior) State, but that’s the facts of the game.”

Coach Schooley talked highly of the team’s physical play and how relentless they were. He also said about how the game they played was well executed and a true “working man’s” game.

The Robert Morris University Colonials will face off against the nationally ranked Providence College Friars tonight at 7:30 p.m. at PPG Paints Arena for the championship game of the Three Rivers Classic.