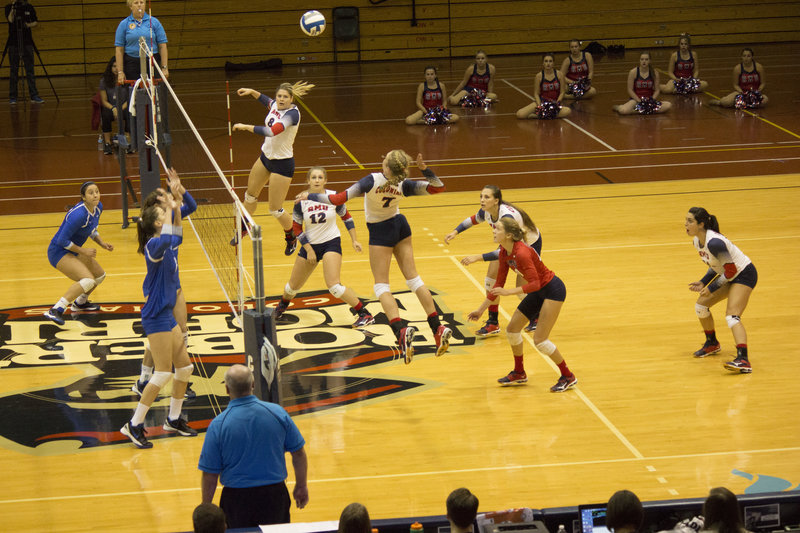 The Robert Morris Colonials lost to the Central Connecticut Blue Devils in a nail-biting five-set match.

RMU started out strong with a three point run on the Blue Devils. Back and forth action ensued until a three-point run by CCSU gave them the 10-7 lead. RMU picked up their game after that point, establishing a slim lead throughout the rest of the set.

Central Connecticut’s blockers proved to be a problem for the Colonials in the second set. At the beginning, it looked very even until CCSU took a two point lead. RMU started to play a little sloppy with two double-touches, while the Blue Devils capitalized on the opportunity to stretch the lead to 15-9.

Robert Morris dropped the second set after the Devils’ four-point run was enough to hold off the Colonials’ comeback. Central Connecticut won the set, 25-21.

A slow start by RMU in the third set proved no match for its stellar offense, whose four consecutive kills tied the set at seven all. Though, the Devils eventually got the last point, winning the third set 25-23.

The fourth set was then a must win for the Colonials.

RMU dominated the Devils the entire game — Fisher showed her prowess with the set-winning spike. The Devils only could manage 16 points in the set. Robert Morris ran the score up to 22-16 when Fisher had an epic kill from across the court, eventually taking the set.

Set five began with an 8-0 lead by the Devils. RMU made a comeback after playing exceptionally well, winning 1o of the next 14 points in the set. Although, the Devils finished the Colonials off with a 15-13 win in the deciding set.

The Colonials lost the match, 3-2 sets. Robert Morris plays next on Sept. 25 in the friendly confines of the Sewall Center against conference foe Bryant.