Colonials drop first game of the weekend to Colgate 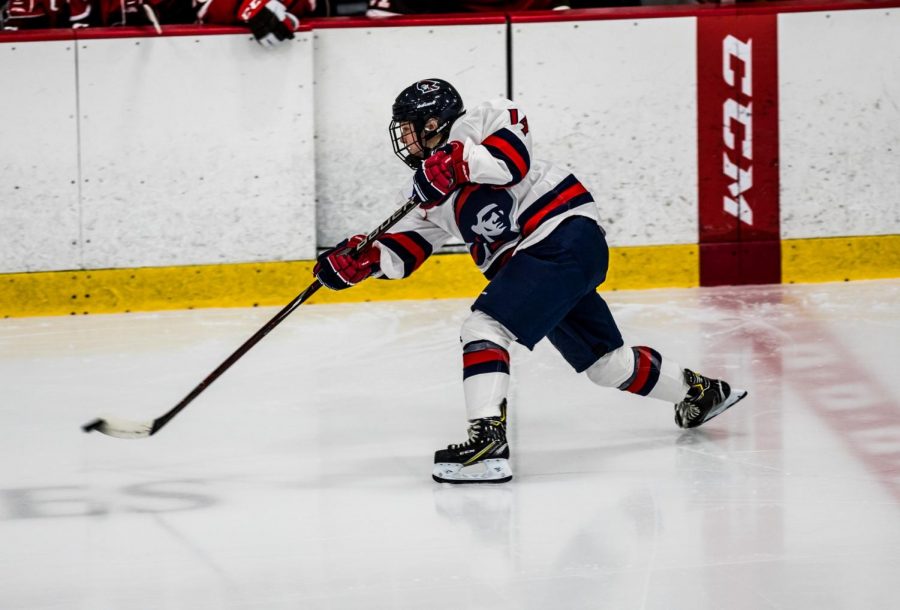 PITTSBURGH — It was a chilly Friday night on Neville Island when the No. 10 ranked Colgate Raiders (7-4-0, 3-1-0 ECAC) came to town to take on the Robert Morris University women’s hockey team (6-5-1, 4-1-1 CHA). Despite trailing 4-0 heading into the third period, the Colonials were able to mount a respectable comeback. Ultimately though, they fell short 4-3.

After the game, Lague talked about the team’s ability to claw their way back despite being down four goals. She said, “We never give up… we proved to ourselves and our opponents that we are, you know, a force to be reckoned with.”

The first period started off with Colgate controlling the play in their offensive end for much of the period. They added the first tally of the game in this frame when Jessie Eldridge was able to enter the Colonials zone with speed and fire a wrist shot past RMU goaltender Lauren Bailey. This goal came on the power play as Kirsten Welsh was in the box, serving a two minute minor for checking.

Following the first intermission, the Colonials came out on fire and seemed to keep the pressure on the entire second period. RMU managed to register 14 shots during the course of the period, but only Colgate was able to cash in on their chances. While the Raiders only managed to put just nine shots on goal during the period, three of them found their way past Bailey.

The first of these three goals came off of the stick of Coralie Larose, who was set up by Nemo Neubauerova and Shea Labbe. Following this, Tanner Gates added a helper onto a goal scored by Bailey Larson. As time dwindled down in the period Larson and Malia Schneider assisted on Eldridge’s second goal on the night. Colonials arena was nearly silent as they witnessed RMU head into the locker room down four goals.

The third period got off to a pedestrian start with RMU maintaining the puck, but they were still unable to get the puck behind Julia Vandyk who was able to make 34 saves on the night. That was until Schneider received a five-minute major penalty for hitting from behind. This call also led to her ejection from the contest.

RMU made the most of this chance as they scored twice on the power play. Gebhard’s goal came as she buried the puck in the top corner of the goal above Vandyk’s shoulder. The Colonials then followed this up with a goal scored by Amber Rennie.

The major penalty then expired, but it would not take long for RMU to draw another penalty. On the power play after a tripping penalty, RMU scored a goal to trim Colgate’s lead down to just one with nearly two minutes still remaining on the clock.

“We just need to need to play with that intensity all three periods,” said Lague.

Unfortunately for the RMU faithful, the tying goal would never come and the Colonials would drop game one of this weekend series 4-3.

“I think we finally… finally played like we got nothing to lose (in the third),” said Coach Paul Colontino.

The two teams will be back in action again at 3:05 p.m. tomorrow afternoon.