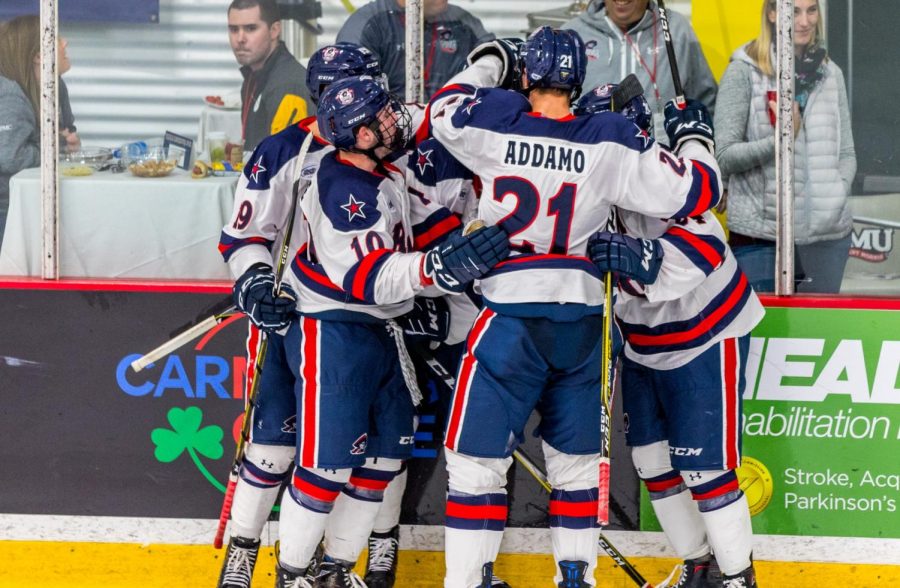 PITTSBURGH — After a long summer, the Robert Morris men’s hockey team (0-1) was back in action on Saturday as they hosted the WCHA’s Michigan Tech Huskies (1-0). The Colonials dropped their first game of the season by a score of 2-1 in overtime.

Both teams had chances early in the game due to penalties, however, neither team was able to capitalize in the first 10 minutes. Nick Prkusic had an excellent chance for the Colonials but was robbed by the glove of Michigan Tech netminder Matt Jurusik. Near the end of the period, the play between the two teams became feisty. However, at the end of the period, it was still 0-0.

It was also an undisciplined first period, with five penalties being called, three on Robert Morris. Aidan Spellacy went for hooking, Alex Robert went for boarding, and Roman Kraemer served a bench minor for too many men. For Michigan Tech, Brian Halonen was called for slashing and Tyler Rockwell went to the box for interference.

Less than three minutes into the second period, after a Nick Jenny tripping call, Alex Smith got the Huskies on the board after a great diving save by Justin Kapelmaster, but the puck was poked in under his pad. With just over 10 minutes gone in the period, Nick Lalonde was getting into it with Alex Smith of Michigan Tech, but nothing came of it. Despite chances for both sides in the second half of the period, at the buzzer to signify the end of the second, it was only 1-0 Michigan Tech.

In the second, it was Michigan Tech that outplayed the Colonials, outshooting them 15-9, but only the one goal from Alex Smith to show for it. Penalty-wise, it wasn’t much better for either team as they both had two penalties called on them. For RMU, Nick Jenny went for tripping, which resulted in the Alex Smith goal, and Alex Robert went for slashing. Brian Halonen completed the hat-trick of penalties for the Huskies, adding a hooking penalty along with another slashing penalty to bring his total to three on the night.

In the dot, the Colonials were 23-40, with Daniel Mantenuto going an impressive 11-13 on the first line between Luke Lynch and Nick Prkusic.

At the start of the third period, the Colonials’ goaltender had to be on his game after losing his stick in a scrum and had to make a couple of saves using only his pads and blockers. Robert Morris tied the game with 11:39 remaining as Justin Addamo poked it past Matt Jurusik, very similar to Alex Smith’s goal for the Huskies. After the play, Jurusik was furious with the referees but Ryan Sweeney confirmed the goal for the Colonials.

On his goal, Justin Addamo said after the game, “Nick Lalonde on the line won the race on the forecheck and then passed the puck to the defense [Alex Robert], and then our defender [again Robert] did a good job putting the puck through traffic to the net. The rebound was in between everyone’s legs, and Grant Hebert and I just whacked it in.”

At the end of the third, the game was tied 1-1 and headed to overtime. In the third, Robert Morris outshot the Huskies 11-9, including Addamo’s game-tying goal. One thing the Colonials and Huskies improved upon was their discipline. Head coach Derek Schooley mentioned “it’s a theme of ours to be more disciplined this year. I thought last year we were a little undisciplined.”

In overtime, the Colonials had a great chance thanks to Justin Addamo, but the shot was blocked during a shoving match in the crease. Huskies alternate captain Seamus Donahue then went to the box for slashing. However, it was the Huskies that capitalized on the special teams opportunity as Alec Broetzman beat Justin Kapelmaster five-hole to give the Huskies the 2-1 victory.

In the overtime period, both teams had five shots, but it was Broetzman that put the dagger into the hearts of Colonials fans. Throughout the game, the Colonials outshot the Huskies 35-31, with Luke Lynch and Aidan Spellacy tying for the Colonials lead with five apiece. Alex Smith led the Huskies with five as well.

The Colonials are back in action against the Huskies on Sunday, with puck drop at 3:05 at the Island Sports Center. Although Justin Kapelmaster made 29 of 31 saves in his Colonials debut, Coach Schooley did not name a starter for Sunday’s game, adding; “we haven’t decided. We’re going game-by-game. We have three really good goaltenders, but Justin [Kapelmaster] made a really good first impression. I thought Justin was outstanding, made a couple of acrobatic saves.”