Colonials duke it out with the Dukes, defeat Duquesne 66-59 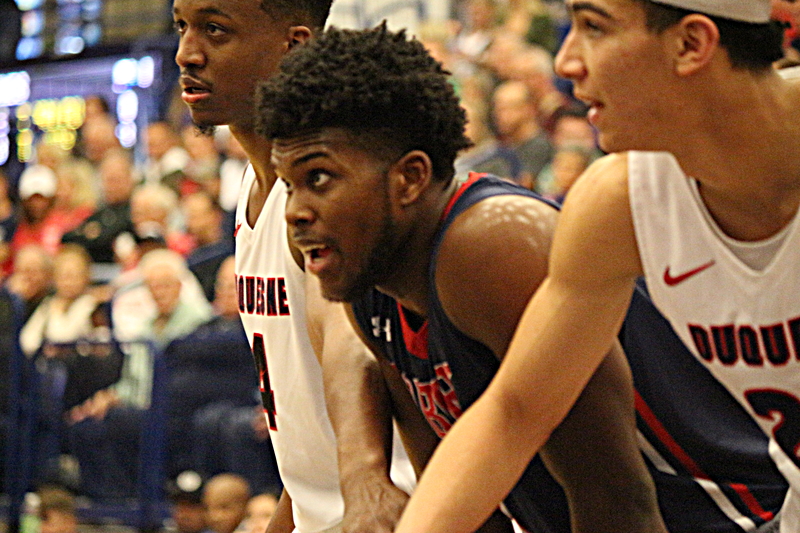 The Robert Morris men’s basketball team took on rival Duquesne Dukes on Sunday. Duquesne entered the game with a record of 2-0 on the young season while Robert Morris entered Sunday with a winless record of 0-3.

“Well, every game means a lot, but I think it says for itself,” said Malik Petteway. “You have Pitt, Duquesne and Robert Morris. I think sometimes we’re overshadowed because they’re the two in the city. I think it is a rivalry, yes. I think this game means a lot to not just us but to the school and to everybody.”

The rivals traded shots early as neither team was able to pull away with a strong lead.

Duquesne would lead for much of the game early but never led by more than three. This would go on until Robert Morris would take a two-point lead on a Malik Petteway three-pointer at the 9:12 mark. That lead wouldn’t even last a second, however, as a technical foul would be called immediately following the play on Koby Thomas.

“It got physical in the first half,” said Petteway. “I continued to play in the second. Coach is telling me to have fun, play physical and do what the team needs. That was rebounding, and I did that.”

The teams would then trade threes to make it a 25-21 score. Robert Morris then added a bucket to pull within two and make it 25-23. This was followed by a traveling call on Duquesne. Leondre Washington would then take matters into his own hands, making two layups to put the Colonials ahead at 27-25. That would start off a 12-0 run for the Colonials, and they would end up extending their lead to 33-25. The first half would end with all Duquesne as they would go on a 5-0 run to pull within three. Robert Morris would exit the first half with a 33-30 lead on their city rival.

“I feel like in a fight, whoever throws the first punch usually wins the fight, and I feel like tonight we threw the first punch. We did have little obstacles to get through, but for the most part, we finished,” said sophomore guard Dachon Burke.

The Dukes would start with the ball in the second half and immediately make a basket to bring the score within one at 33-32. Robert Morris would then score five unanswered points, including an incredible putback dunk by star freshman Koby Thomas, to make the score 38-32.

“He’s a guy who, when he’s active, the ball finds him,” said Coach Andy Toole on Thomas. “He has an energy level and an athleticism that is hard to handle. The first couple minutes of the game, I didn’t like his energy level and I didn’t like his activity. To his credit, he picked it up as the game went on. I thought he had a much better second half than his first half. Some of it is just getting yourself going. His putback dunk was obviously an energy play. He started to work a little bit harder defensively. I thought he did a nice job down the stretch of the game. Working defensively, communicating to the guards when screens were coming and handling his assignments as well.”

A three-point play by Matty McConnell would give Robert Morris a 41-35 lead. Duquesne would then go on a 6-0 run to make it a 42-41 game. It would be Duquesne’s first lead of the half.

That lead would not last very long. Robert Morris would take the lead back at 43-42 before extending it to 44-42 on a questionable foul call below the bucket.

Duquesne would tie it up, and that would lead things into a repeat of the beginning of the first half. That is, both teams refusing to let the other pull too far away. The Colonials would lead the Dukes by just one, 47-46, at the ten-minute mark.

Duquesne would take another one-point lead at 48-47. That would be Duquesne’s last lead of the night. They kept it close, but Robert Morris would keep a small lead for most of the remaining time. The key to keeping this lead was limiting their star guards. That was especially true for Mike Lewis II, who was 0-for-6 in the game.

“Coming into the game,” said Burke, “(Toole) has been challenging us all week to shut down their guard play and win this game. I think that we did a good job. As the game went on, I knew that my shots weren’t dropping, and things like that.”

Robert Morris’s lead would fluctuate between three and five for most of the game before a Jon Williams layup would give RMU a 58-52 lead with two minutes remaining. This would be followed almost immediately by a Matty McConnell steal and layup to make it 61-53 with 1:30 left.

The Colonials would extend their lead to 66-59 and leave the Palumbo Center with their first win of the season. It was a great team win capitalized by a strong defensive effort.

Every player scored for the Colonials, while Koby Thomas (10), Dachon Burke (11), Matty McConnell (13) and Malik Petteway (13) all scored in the double digits. Burke and Petteway each had a double-double, as they had 10 and 14 rebounds respectively in the game.

Robert Morris would out-rebound Duquesne 49-32, including 21 coming from the offensive glass.

“We tell our guys all the time, sometimes it’s not always the best rebounders, it’s the guys that go all the time. We challenged our go guys to get on the glass on shot after shot. We looked at the numbers from the first two games.” said Coach Toole.

As for Duquesne, Ren Castro-Caneddy and Eric Williams Jr. both ended with game highs of 18 points. Freshman Tydus Verhoeven added 12 points but also led the Dukes with nine rebounds and seven blocks. Those seven blocks tie the Duquesne freshman single-game record. That record was set by Derrick Alston on January 5, 1991, in a game against St. Joseph’s.

Duquesne falls to 2-1 on the young season while the Colonials earn their first victory and now sit 1-3 in the 2017-2018 season. Duquesne’s next game will be against Cornell on Nov. 27 before hosting the University of Pittsburgh in the famous “City Game” on Dec. 1. The Colonials’ next game will be on Black Friday when they host Norfolk State in their first home game of the season.