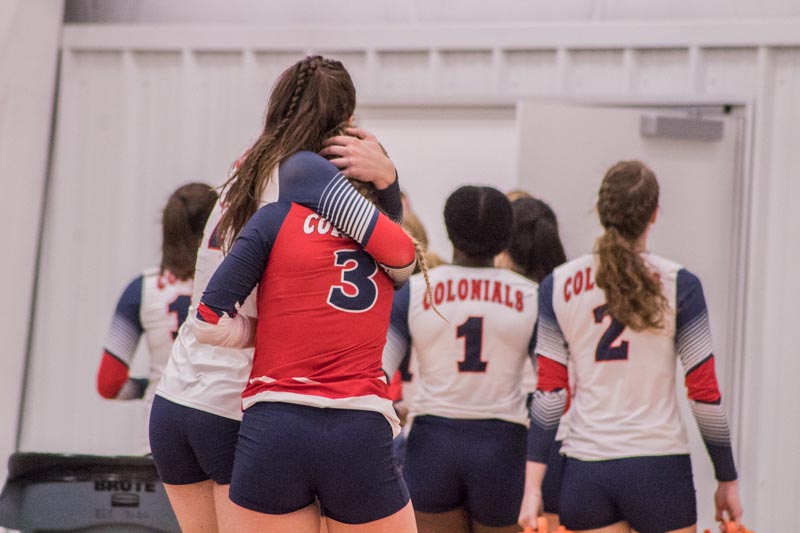 In a five-set thriller with the game on the line, the Robert Morris Colonials snuck past the Saint Francis Red Flash 3-2.

The opening set told a tale of what everyone in attendance thought was going to be an early night. Everyone, except for maybe Saint Francis University.

The opening set started out as usual for the Colonials; slowly at first, but quickly overtaken by momentum and confidence. The team was playing phenomenally, they moved in sync with each other, as well as pulling off some truly impressive plays along with crowd-pleasing kills. There didn’t seem to be a seam in sight for this RMU team. They dominated the first set with a score of 25-11.

The second set of the night is where the plot twist to our story starts. Robert Morris started out not really great, but not exactly horrible either. Just okay.

Saint Francis, however, started with a vendetta in their minds; they were not going down without a fight. The Colonials seemed to be almost out of it, and it didn’t stop anyone from knowing that the score at the time was only 7-3, and not in the favor of Robert Morris.

It seemed as if the team had almost forgotten there was a game going on. The team fought to come back hard, but unfortunately, they got their fluidity back too late, leaving them only with a second set loss 25-20.

When the third set started you would have thought that the team that dominated in the first set had been replaced. The Colonials seemed lost throughout the entirety of the set. They missed serves, forgot how to cover, and in doing so allowed Saint Francis to capitalize on those mistakes.

RMU seemed as if they had been told some horrible news in between sets because the team that came out to play the first set was not present in the third.

Additionally, coach Dale Starr also got his first red card of the night, rattling the players further, and giving the Red Flash more momentum than before. That being said, the score of the third set was 22-16 in favor of SFU.

The fourth set is where our story gets back on to its original path.

RMU was able to get back on track, although at first, it didn’t look so promising.

Saint Francis led Robert Morris by as much as five points. This trend continued until RMU was finally able to triumph over and take the lead. The team that had been missing serves and forgetting to cover their hitters was left behind in the two sets before.

The team from the first set was now back, and ready to win. They proved this by winning with a set score of 25-17, this one finally back in their favor.

The fifth and final set was one to be remembered. Both teams were looking to take home the win from this matchup, and neither was going down without a little bloodshed. Both teams battled back and forth point by point. Neither team anywhere near getting within winning by two; leaving the crowd at the edge of their seats and biting their nails.

The could feel the tension in the gym; a different energy than anywhere else on campus at the moment. It was a hard-fought battle, Coach Starr went on to receive another card from the officials, this time a yellow, but it just added to the ambitions of his team this time. Finally, the Colonials were able to achieve a victory with a final set score of 16-14, thus defeating the Red Flash 3-2.

Leader’s in this matchup were Freshman Emma Granger with 22 points, 14 kills, six aces and four blocks, Alyson Londot and Taylor Lord each had eight kills with Maria Alfano not far behind with seven. Brianna Frakes also contributed to tonight’s win with 42 assists.

Earlier this week Robert Morris volleyball took a hard hit with a loss against West Virginia University, losing in only three sets. Today, the team came out to play a much better game.

“It feels a lot better. West Virginia was a really good team, but we didn’t come out really confident I don’t think, but today we came out with something to prove. It felt really good,” Granger said.

“I just think we came out a little slow, in the second and third set. I think we figured it out in the fourth, like okay, let’s go,” Emma Granger said.

Colonials play their next match against the Bryant University Bulldogs at the North Athletic complex on Nov. at 7 p.m.