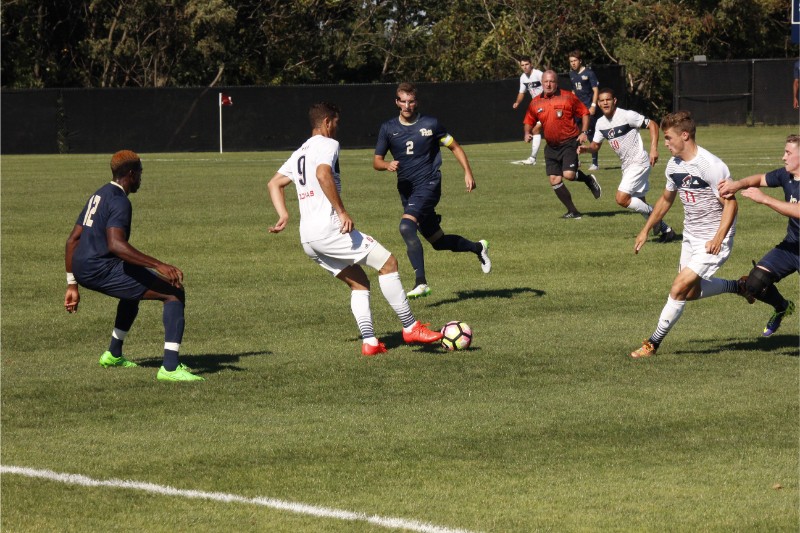 RMU didn't win or lose Saturday as their last game before NEC play ended in a 2-2 stalemate.

The Robert Morris Colonials extended their winning streak to two with a win over the Pittsburgh Panthers by a score of 2-0.

The game started out very aggressive and physical. After a scrum at the five minute mark between Pitt’s Roosevelt Angulo and RMU’s Kai Olguin, Angulo went on to provide the spectators a scary scene as he collided with Colonials goaltender Winter Fondi.

The onslaught of physicality by the Panthers didn’t stop there; they continued to play hard until the 25th minute, when RMU got its first shot of the game. After that shot, the Colonials rallied and smothered all offensive maneuvers from Pittsburgh, and the offense started showing some promise.

According to Fondi, however, this was all a part of the game plan for today. “We wanted to keep the first 10 minutes nice and clean, so we could figure out how they were going to play and how to stop them,” he said.

A four-plus minute attack by the Colonials yielded nothing, and it seemed like the Panthers keeper was unbeatable. Then at the 34 minute mark, Jake Cooper ripped a beauty into the twine past goalie Mikal Outcalt, making it 1-0 in favor of the Colonials.

Pitt did not test Fondi for 15 minutes until recording a shot on goal 38 minutes in.

At the half, despite being out-shot 5-3, the Colonials held their first lead at home since the loss to Cleveland State back in August.

The start of the second half went back and forth in midfield as both teams were trying to do something. RMU got a break when there was a series of saves and stellar defensive plays by the back four as the ball was loose in front of Fondi.

In the 55th minute, Zac Sherman chipped a shot over the Panthers’ goalie, doubling Robert Morris’ lead. Another intense scrambling for possession occurred for the next 12 minutes with a few good chances and acrobatic saves, yet again, by Fondi.

Keane McIvor recorded assists for both Colonials’ goals. He showed excellent poise and respect as he was subbed off with 17 minutes left in the game; he made sure to thank the referee before he jogged off the pitch.

With the minutes ticking off the clock as a cool breeze swept over the rolling hills at the North Athletic Complex, Pitt was still sweating to get something going. Eighty-five minutes in, the Panthers were throwing everything they had at Fondi, who calmly brushed them off for the remainder of the game.

RMU won the contest by that same 2-0 score. Meanwhile, Fondi preached one word after the game and that was focus.

“We just had to stay focused; obviously we’ve been struggling in the back a little bit,” Fondi said. “We’re pretty much trying to work hard and do what we’re supposed to do no matter who’s in because we are shuffling some guys around trying to figure out what works and what doesn’t.”

The Colonials improved their record to 2-3-0 on the season. Next, they will travel to Lehigh on Sept. 17 and then to Duquesne on Sept. 23.