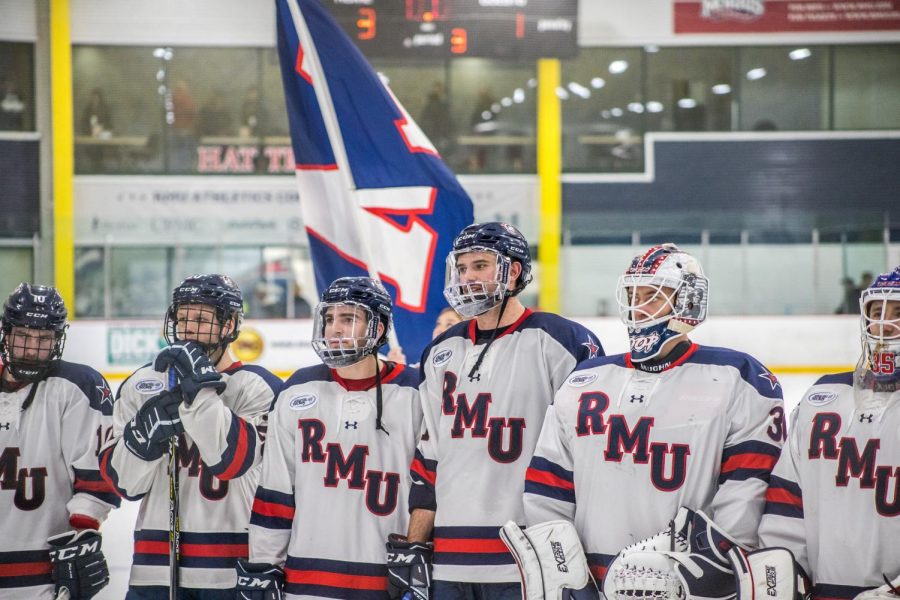 After the Colonials failed to record a goal in the first game of this two-game series, RMU quickly jumped on the Black Knights from West Point early.

Just two minutes into the game, Michael Wilson took a high sticking penalty, which would be fatal for Army as Nick Jenny took a point shot that would find its way in past Trevin Kozlowski. This power-play goal would be their first goal in their last 15 attempts on the man advantage.

“We made some changes to our powerplay, we did some things we want to do better, and it worked,” stated Coach Derek Schooley.

The Colonials would get themselves into penalty trouble later in the period, as they faced a 5-on-3. The penalty kill would continue to be successful as Nolan Schaeffer added two big blocks in front of his netminder, Dyllan Lubbesmeyer.

“When there are big guys in front of me, including my own teammates, it’s so crucial they block shots,” Lubbesmeyer said. “When they are eating pucks, it’s huge and really helps a lot.”

The second period would be uneventful, as neither team could strike on their offensive opportunities. The Colonials did string together some strong offensive zone time, creating plenty of scoring chances late in the period, however, they could not capitalize.

“We got more pucks to the net, but we need to make sure we convert on our chances as it’s a theme right now with our inability to score goals,” Schooley said. “The margin of error is very thin when you only score one or two goals a game.”

As the game progressed into the third period, the one goal Colonial lead would not uphold as Eric Butte for the Black Knights was able to go short side on Lubbesmeyer to even things up.

The remainder of the third period would be tightly contested, with both teams trying to get the go-ahead goal. The Colonials had two great opportunities as Brendon Michaelian rang one of the post with about three minutes left. A few minutes later, Nick Prkusic had a golden chance but it was stopped by Kozlowski.

As this game went to overtime, neither team could find the back of the net in the first overtime period as well as 3-on-3 double overtime. The Colonials looked stronger in the overtime periods but failed to end the contest.

The game would eventually take a shootout to decide the winner. The Colonials shot WENT with Luke Lynch as the first shooter, however, he would be unsuccessful.

Army’s first skater was Eric Butte and he seized the opportunity by going five-hole on Lubbesmeyer to end the game.

Lubbesmeyer saved 45 shots but could not make the lone shootout save, and he was disappointed in himself following that goal.

“I am really kicking myself right now because I am usually a shootout guy,” Lubbesmeyer said. “I was telling the guys we are going to win but he popped a quick one and I did not realize it was one goal take all.”

In their first-ever shootout, the Colonials could not take advantage but it will be something to work on similarly with the 3-on-3 overtime play.

The team returns to action when they travel to Johnstown to take on Ontario Tech (6-12, 6-12 OUA) in a neutral site at the 1st Summit Arena at War Memorial on Jan. 4.