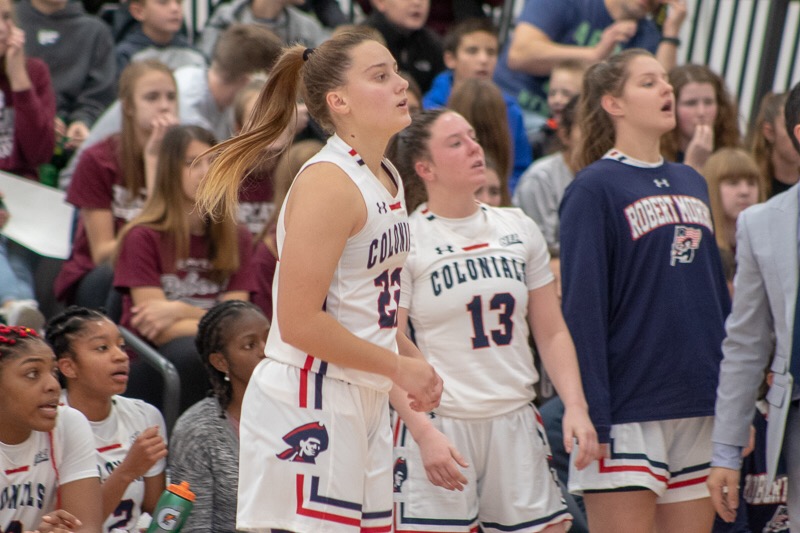 MOON TOWNSHIP— The Colonials (1-7) were unable to grab their second win of the season as they fell 54-46 to Kent State (4-4). Robert Morris was able to jump out to an early lead in the first quarter but saw it vanish in the second quarter after Kent State picked up their offensive attack.

“They took care of the ball a little better,” said head coach Charlie Buscaglia.”We were forcing some turnovers, some of them were unforced. They started executing some plays a little better.”

Another theme that started after the second quarter was the lack of consistency in Colonial scoring. A steady pace was never met and the Golden Flash was able to take advantage of the spotty RMU attack. Kent State shot for 38% from the field in the second half of the game accompanied by shooting 33% from three in the second half as well.

Though the Colonials didn’t have their best offensive performance, the rebounding remained strong through to the very end.

“As far as around the basket I think we got after it with offensive rebounding. I thought we missed some shots that we had good looks but we didn’t give up and run back. We crashed in there with our forwards and grabbed a lot of rebounds,” said Coach Buscaglia when asked on the positives he saw from his team during this game.

Nneka Ezeigbo led all Colonials in scoring with 18 points on the night. Ezeigbo facilitated much of Robert Morris’ offense due to the perimeter shooting being lackluster. Rather than taking shots from beyond the arc, the Colonials worked the ball around to open up lanes to the net which gave Ezeigbo all the room she needed to make a difference down low.

As of now Robert Morris still only has one win on the year with a 1-7 overall record but they’ve yet to play any conference games. This may play into the Colonials’ favor if they can find their groove before NEC play starts up in a couple weeks. They haven’t had the easiest schedule with traveling to Los Angeles for two games against SMU and Loyola Marymount and playing No. 14 Iowa in Iowa. Robert Morris has potential, but they need a turnaround soon. This opportunity presents itself Saturday at noon.

The Colonials will take on Pitt Johnstown at noon on Saturday at the North Athletic Complex in their next game.