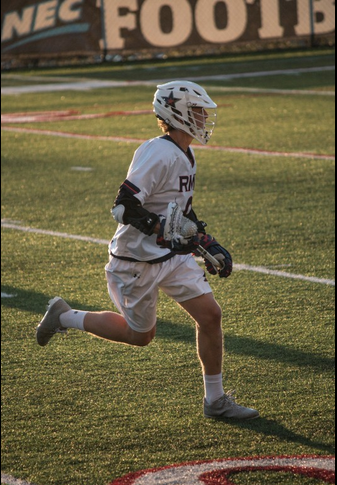 The first quarter started out with firm possession by the visiting Hawks, who worked the ball around the perimeter and generated some early scoring opportunities. They were able to get off to a 1-0 lead with 13:29 on the clock, when midfielder Kyle Cain put a shot past RMU goalkeeper Alex Heger in the middle of the slot. Despite the early setback, Robert Morris’s defense remained staunch and alert, limiting the amount of Hawks scoring chances and preventing them from getting any decent shots up close in the deep slot.

RMU finally struck back to tie the game at 5:14, as Jimmy Perkins netted his 21st of the season with the assist going to Brad McCulley. St. Joseph’s did not hold back however, and grabbed the lead back 2-1 when Evan Campbell netted his second of the season assisted by Shane Fable. Both teams traded back and forth strong possession, but the Colonials were able to tie the game on Corson Kealey’s 14th of the season assisted by Tyson Gibson, and after one the Colonials and Hawks were even at two.

Heading into the second, the Colonials worked the ball off the get-go, moving it around the perimeter with ease, but were unable to find the back of the net. RMU did a much better job in the second, being able to generate more scoring opportunities and forcing more turnovers off the Hawks’ missed opportunities, which they hadn’t been able to do at all in the opening quarter. The Hawks, though, got open looks at Hager and were able to put in two more goals to go up 4-2. But Perkins’ second and Gibson’s first of the game pulled RMU back even, and at halftime both teams were stalemated at four.

The third quarter saw Robert Morris grasp control immediately, with two quick strikes 30 seconds between each other, with Matt Schmidt getting his first of the contest and Gibson notching his second, to jump out to a 6-4 lead. But once again St. Joseph’s refused to go away and tied the game at six on goals from midfielders Nicholas Vernacchio and Hayes McGinley. The teams again ended the quarter in a tie and looked to break through in the final quarter of regulation.

The final quarter started out as aggressively as the previous three, with both teams unable to find the net on multiple turnovers forced by each other. It looked as if the game might be headed to overtime, but then the Hawks took a 7-6 lead with just under eight minutes left in the game on a goal from Patrick O’Brien, and then went up by two when McGinley put his second of the game past Heger with just under five and a half minutes left on the clock.

Jimmy Perkins’s hat trick goal brought the Colonials back to within one, but that was as close as they would get again for the final minutes of the game. RMU had an opportunity with two and a half minutes left to tie the game, but missed a wide open net, and sealed the game 8-7 in favor of the Hawks.

Senior defender Zach Bryant thought RMU was able to stick with SJU’s style of play despite the loss.

“I think coming out of the first and second quarters we stuck with them,” said Bryant. “It was a back and forth game. Going into the second half we readjusted things, calmed things down, and we came out with those two goals right away and I thought we pushed the tempo right off the start there. Unfortunately, they got some bounces that went their way going into the fourth.”

Bryant also said he felt that his time at RMU has been incredibly special and that it was “bittersweet” to play his last game at Joe Walton, but that he was focused on the upcoming NEC Tournament as the Colonials try to shift their focus to claiming their first conference championship since 2012.

“We still have lots of lacrosse to play,” said Bryant. “We’ve got playoffs coming up next week, that’s our main focus right now, just regrouping and focusing on what we need to get better and taking it to next week. I think the biggest thing is just to focus on our game … it’s a big week … don’t let any outside distractions pull us away from our game … and come out firing when playoffs start.”

With the loss, RMU drops to 3rd in the NEC standings and now looks to its playoff semi-finial match with No. 2 seed Bryant (8-6, 5-1 NEC) at a time to be determined later this week. Saint Joseph’s claimed the regular season championship with the win, going undefeated in NEC play, and will host the 2018 NEC Tournament on May 3 and 5 in Philadelphia. The Hawks will face No. 4 seed Sacred Heart (7-7, 3-3 NEC) in the other playoff semifinal, the time of that game is to be determined.