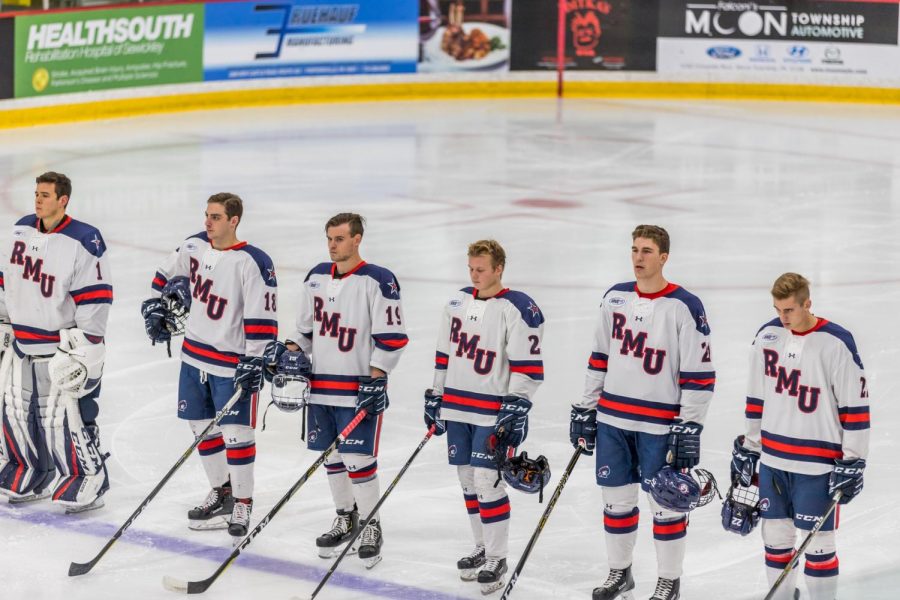 The Robert Morris men’s hockey team started their season 1-1 as they struggled to hold onto the puck. This past off-season, the Colonials lost Brady Ferguson, their highest scoring player in team history; but they also brought in 11 freshman, one of the largest classes in recent memory.

At practice, RMU Sentry Media caught up with head coach Derek Schooley and asked him what the team was going to do with the loss of Brady Ferguson, Schooley’s reply was that “You’re not going to replace Brady Ferguson with one guy, you’re going to need about three or four.” Coach Schooley also named freshman Grant Hebert, Nick Lalonde, Justin Addamo and Kip Hoffmann as players who could make an impact on the team this year, stating that they were “guys up front who we feel can do some damage, and help replace the loss of Brady Ferguson.”

Alex Tonge, a senior from Kingston, Ontario was named one of the assistant captains for the team this year, joining Pittsburgh native Luke Lynch; a junior. Tonge was asked about being a leader for this young team, and said, “I’ve learned from great leaders before me, like Rob Mann and Daniel Leavens [both class of 2017], they were able to mentor me as a freshman, and I think I’m doing the same with the freshman this year.” The left winger also added that he was looking forward to “just seeing what we can do… we got a lot of fresh new faces… and I think we can do a lot this year”.

One such freshman is Justin Addamo. Addamo was born in Clermont-Ferrand, France, but he played the past two years with the Lone Star Brahmans in the North American Hockey League. Addamo also added five points in five games with the French U18 team at the 2016 World Junior Championships. RMU Sentry Media asked the 6’6 right winger how big a difference it was between the French and American game. Addamo replied with “Here [In America] the game is much quicker. The rink is much smaller, and it’s much more physical.” When also asked about his experience with the French National Team, Addamo added, “It was a great experience… play against really good players who play in America or Canada, so it was really helpful.”